A Sunday to consider deacons

In our first reading for the Fifth Sunday of Easter, taken from the Acts of the Apostles (Acts 6:1-7), we hear about something that, at least since St. Ireneaus of Lyons wrote his work Against the Heresies (3.12.10) in the late second century (ca.175-185), is taken as something like the biblical institution of the diaconate. However, a close reading of the biblical text, even in English, demonstrates what Owen Cummings in his still excellent short book Deacons and the Church noted: that it must be "readily conceded that the seven reputable men of Acts 6 were not historically and formally deacons" (34). In an essay cited by Cummings, Lawrence Hennessey, S.T. pointed out:

Luke's readers may well have seen (even if anachronistically) the Seven as diakonoi, deacons in the later sense of 'holders of the office of deacon.' They may well represent the incipient stages of the latter office of diakonos

Hence, Cummings' conclusion: "The seven men of good standing of Acts take on a foundational diaconal role, even though they were not deacons" (34).

Properly interpreting and and applying biblical passages in light of, in concert with, and sometimes critical of, how they have been interpreted and theologically applied is important. For example, one cannot credibly use Acts 6:1-6 as an argument to exclude women from being deacons in the same manner that Jesus choosing only men to be his Apostles is often employed to argue against women as priests. This is true no matter what you might think about this argument against women priests. When you read Acts 6:1-6 closely, one of the strangest things about this passage is that the only people referred to as engaging in diakonia are the Apostles themselves. In the NAB translation (NABRE has the same translation of the New Testament as does the NAB- the revised translation had only to do with the Hebrew Scriptures, or Old Testament) verse 4 of Acts 6, the word "ministry" in "ministry of the word" is a translation of the Greek word diakonia. It refers to preaching and proclaiming the kerygma, the message of salvation in and through the resurrected and glorified Christ.

What is clear from this passage is that the seven men were "filled with the Spirit and wisdom" (Acts 6:3). As a result of this event taking on a foundational role in the Church with regard to deacons and the diaconate, the ordination prayer for deacons is very much about those ordained receiving a fresh and powerful outpouring of the Spirit. At times I have thought it's a bit like a second Confirmation. One idea that might bear some development is this: if all Christians participate in the one priesthood of Jesus Christ by virtue of their Baptism and Confirmation, might we say that they also participate in the diakonia of Christ by virtue of their Baptism and Confirmation? 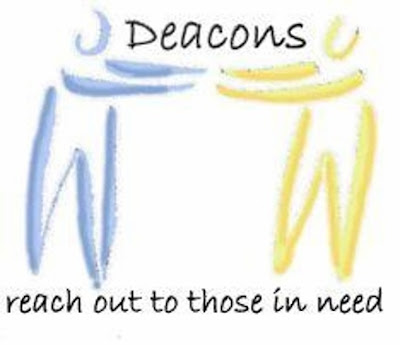 According to an Apostolic Letter promulgated by Bl. Pope Paul VI on 18 June 1968, the form of the sacrament of diaconal ordination are these lines from the Prayer of Ordination for Deacons

Lord,
send forth upon him the Holy Spirit,
that he may be strengthened
by the gift of your sevenfold grace
to carry out faithfully the work of the ministry

Of course, "your sevenfold grace" (septiformis tuae gratiae) refers to the seven gifts of the Holy Spirit: wisdom, understanding, counsel, fortitude, knowledge, piety, and fear- better translated "wonder or "awe"- of the Lord.

We go for typology in Christian theology. So, when we think about the three offices that together constitute the sacrament of Orders in light of the Triune God they are consecrated to serve, it is does not seem improbable or wholly inappropriate to say something like- Bishop corresponds to the Father, Priest to the Son, and Deacon to the Spirit. As with all things Trinitarian, we wouldn't want to put too much weight on this typology or be absolute about such a formulation. But when we think of the economy of each of the offices (i.e., what those who serve in those offices actually do in fulfillment of their office) I think this holds some water, especially when one considers that deacons are more free to serve where, when, and how the Church's ministry is required. To serve in this highly flexible manner, of course, requires discernment (i.e., the Spirit and wisdom).

Another foundational aspect the seven Spirit-filled and wise men of Acts provide is that deacons build bridges, fill gaps, or whatever similar image you may want to use. Diaconal ministry is a unifying ministry. Put in broad categories, being clerics who, by and large, live lay lives, deacons link the hierarchy to the laity and the Church to the world. We do the latter by making the Church formally present in places it might not otherwise be.

Another foundation of diaconal ministry derived from the wise, Spirit-filled men of Acts 6 is reaching out to those who are on the margins, who have been mistreated, ignored, or hurt by the Church. This comes through in that the immediate cause for their being chosen and empowered was to ensure that those who felt they were being neglected (i.e., the Greek speaking widows) were no longer neglected. In our time, many who feel and, in fact, are neglected by the Church often make no such loud complaint, they just go away and stay away. Even when they do speak up, like gay and lesbian Christians, or those who have suffered sexual abuse by those in the Church's service, or even those who have felt and often been excluded due to an "irregular" marriage situation, many in the Church are quick to shout them down and keep them out. Isn't life much easier without these troublemakers? One job of the deacon is to attend to their spiritual and, when appropriate, their material needs, to see that they are heard, included, and served.
at May 13, 2017