Annunciation of the Incarnation, the Mystery of mysteries

I feel a twinge, but just a twinge, of guilt for not posting anything this year in honor of the Solemnity of St. Joseph. Today is the second solemnity that falls during Lent: the Solemnity of the Annunciation of the Lord. For those who like to do liturgical arithmetic, nine months from today the Church will celebrate the Lords' Nativity. For some reason, there seems to be a lot of confusion surrounding the nature of the Immaculate Conception, which Roman Catholics celebrate on 8 December, mistaking it for the Annunciation.

The Incarnation of the Son of God in the womb of the Blessed Virgin, who is also Mater Ecclesiae (i.e., Mother of the Church), means that, in addition to being "consubstantial," homoousios, one in being with the Father, Jesus, in his humanity, is also consubstantial with his mother and so with us. We call the Church's attempt to convey the mystery of Christ's full divinity and full humanity the hypostatic union. Of course, words, even poetry, which comes closest, always fall short of the mystery, which, by its nature eludes our secure grasp.

Yesterday I wrote about Heidegger's assertion that "historicity," that is, temporality, determines "the ground of [Da-sein's] being." Da-sein, again, is being capable of thinking about being. In his philosophy, Heidegger distinguishes between Sein (Being) and sein (being). Hence, Sein and sein refer to different aspects. Sein is Mystery that Da-sein can't help but ponder, whereas sein refers simply to the existence of some entity. One might say that in the Incarnation Sein and sein collided, creating a sort of metaphysical Big Bang. This collision has been described as "so earth-shattering that it enacts something akin to the psychoanalytic concept of trauma” on the world (Paul’s New Moment: Continental Philosophy and the Future of Christian Theology 7). After the trauma inflicted by the Incarnation, Da-sein can never be the same. 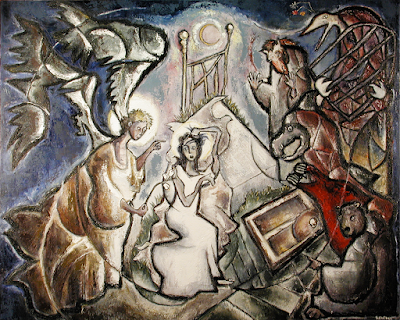 
In light of this, I think it can rightly be said that the Incarnation of the Son of God is the Mystery of mysteries. In an uncharacteristic manner, St. Paul points this out in an understated way: "But when the fullness of time had come, God sent his Son, born of a woman, born under the law, to ransom those under the law, so that we might receive adoption" (Gal 4:4). If I am not mistaken, isn't this why we are to bow when, during our recitation of the Creed in the Eucharistic liturgy, we say the words, "and by the Holy Spirit was incarnate of the Virgin Mary and became man"?

In reading Guardini's reflection on the third Glorious Mystery of the Blessed Virgin's Most Holy Rosary- The Descent of the Holy Spirit- this morning, I was struck by these words:


The picture of Mary's later life serves as promise and security. It shows us that we must not take time too seriously, for if we have faith, eternity dwells in us (The Rosary of Our Lady 128)

Eternity can dwell in us because the mystery of life in Christ, only made possible by his Incarnation, is that Christ can dwell in you by the power of the Holy Spirit. As Michael Card, in his contemporary Christian song, "The Final Word," insightfully wrote: "And so the Light became alive and manna became Man/Eternity stepped into time so we could understand."

I think a fitting reflection for today's solemnity is one by Fr. Tomáš Halík from his book Patience with God:


The biosphere of Truth is mystery, inaccessible depths, and unreachable heights. Its homeland is the eschaton, the absolute future beyond the horizon of history - and its major role in the present is to be constantly in a state of opposition to our attempts to make absolutes out of some of our human attitudes, approaches, and opinions, which are limited by our own individual (not universal) experience