Through these weeks of Ordinary Time, we continue our journey in St. Luke’s Gospel with Jesus from Galilee to Jerusalem. The word “Ordinary” in “Ordinary Time” does not mean ho-hum. It is not used to contrast it with “extraordinary time,” such as Easter, Christmas, Lent and Advent. It is derived from the word ordinal. Ordinal refers to the position of something in a series. During Ordinary Time we track time by the series of Sundays with reference to the beginning of the liturgical year.

Reckoning all of time as if it were a week, going from Sunday to Sunday, early Christians conceived of Sunday as both the first and last day. During Easter we celebrate an octave that begins on Easter Sunday and ends on the Second Sunday of Easter, which, since the decree of Pope St. John Paul II in the Jubilee year 2000, Roman Catholics observe as Divine Mercy Sunday. The Eighth Day is the new and everlasting day of eternity, the day made possible by God's mercy. This bears noting because today Jesus draws our attention to what matters in light of our destiny: mercy. We are in the midst of the Jubilee of Mercy, which continues until the Feast of Christ the King, which we will observe on 20 November.

“If they did not listen to Moses and the prophets, neither will they be persuaded if someone should rise from the dead” (Luke 16:31). In the immediate context of this statement Jesus is referring to the brothers of the dead rich man who requests father Abraham to send Lazarus, who is also dead, to tell them to repent by caring for the poor, by being merciful. In other words, it is part of the parable. But this statement, which brings the parable to its close, also points the listener beyond the parable to Jesus’ own great act of mercy, his resurrection, which had not yet happened.

In a similar way it points us not only to Jesus’ resurrection, which has already occurred, but to his return in glory. Christ’s glorious return is fundamental to Christian faith. The indispensable nature of our belief in Christ’s glorious return is demonstrated by our professing each Sunday when we recite the Creed: “He will come again in glory to judge the living and the dead, and his kingdom will have no end.” In light of this we, too, must heed what the Scriptures teach: "For the judgment is merciless to one who has not shown mercy; mercy triumphs over judgment" (James 2:13)

Proof we believe Christ is risen and will return to definitively establish his kingdom can only be given by how we live our lives. This is not to put anyone on defensive by warning you of the coming wrath or anything like that, it’s just to say that ultimately God’s kingdom will consist only of those who seek to live it as a present reality- we call such people saints- and not as a dream deferred, that is, something that will happen later which doesn’t merit our concern right now. 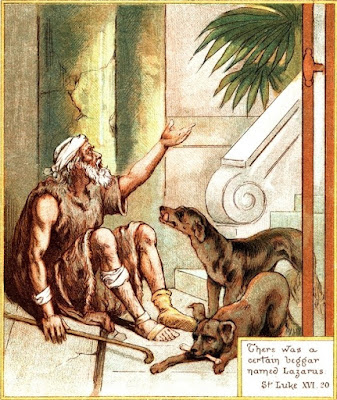 Neither am I suggesting that anyone other than Christ himself will definitively bring about God’s reign. The Incarnation marked the beginning of God’s reign on the earth. In, through, and with Christ, by the power of the Spirit, God’s reign has begun and continues until it is complete. We’re either about ushering it in or not. In other words, we shouldn’t be like the rich man or his brothers demanding some spectacular sign to warn us what will happen if we refuse to make God’s reign a present reality by acting mercifully after the manner of the Good Samaritan.

Through this parable, Jesus draws our attention to what is ultimate by pointing to what is right in front of us. Lazarus sat at the rich man’s gate every day. The rich man did not deem Lazarus worthy of his attention, let alone of his help. At least in his own mind, the rich man had much more important things than to show mercy to the poor, disgusting man whose sores were licked by dogs. As he found out, there was nothing more important than showing the beggar mercy, which is why he begged Abraham, in whose bosom Lazarus received succor, to send Lazarus to warn his brothers to avoid the same hard-hearted callousness. Abraham reminds him that his brothers had the writings of Moses and the prophets to teach them the necessity of acting mercifully.

One prophet who the rich man and his brothers would’ve been wise to heed was Amos. His oracles, through which God sought to call Israel back to fidelity with the covenant, especially by acting mercifully towards widows, orphans, and foreigners among them, were every bit as radical as Jesus’ teaching. In our first reading, Amos tells the wealthy who pay no attention to the plight of the less fortunate that they will be “the first to go into exile” (Amos 6:7).

Our reading from 1 Timothy urges us to prepare for Christ’s return by keeping “the commandment without stain or reproach” (1 Tim 6:14). What is “the commandment”? The commandment is love, caritas, or charity; loving God with all your heart might, mind, and strength. How do you love God with your entire being? By loving your neighbor as you love yourself. In the verse that precedes the first verse of our reading from the sixth chapter of 1 Timothy it is written, “the love of money is the root of all evils” (1 Tim 6:10). It goes on to say that love of money was the cause of some believers straying from the faith. As a result, they were “pierced with many pains” (1 Tim 6:10). The rich man in Jesus’ parable is an example of this. Not one to pull punches himself, Pope Francis, during his Apostolic Journey to Bolivia last year, said the “unfettered pursuit of money” is the “dung of the devil.” As we prepare to receive communion, let’s not forget we come as beggars to the King’s table where he unfailingly has mercy on us.

Today Jesus invites us, as his disciples, to place our hope in him, who is Divine Mercy, by acting mercifully towards others. Practicing the Corporal and Spiritual Works of Mercy, which are depicted in the windows along the north side of our church, is our road to destiny.
at September 25, 2016