"Take me back to the day"

Much like August, September is not looking like a prolific month here on Καθολικός διάκονος. Somehow I feel that is appropriate right now. Currently I am immersed in a lot of reading. In addition to reading Harari's Sapiens, a book I find both rewarding and infuriating, I am also making my way through Giorgio Agamben's Homo Sacer, and an anthology of Giussani's writings, Christ: God's Companionship with Man as well as finishing LaVerdiere's Dining in the Kingdom of God. Just today I received copies of Robin Ryan's Jesus & Salvation and Gary Macy's The Hidden History of Women's Ordination. 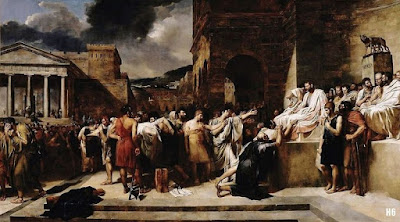 Brutus condemning his sons to death, by Guillaume Guillon Lethiere, 1828

Agamben's book, which is subtitled "Sovereign Power and Bare Life," deals with what I can only describe as very fundamental matters and charts how the state, no matter the form it takes, which is usually nominal, tends to become more and more totalitarian, exerting greater control over life. For example, the section I just read, §4.1 of part two, entitled "Vitae Necisque Potestas" ("power of life death"), describes the power of a Roman father specifically over his son. This power of a father has been described as imperium privatum, or private imperium, or private control. He goes on to show that the origin of the term "father of the people" or "father of our country," is "sinster". Brutus put his own sons to death and "adopted the Roman people in their place," thus extending his imperium privatum over those he ruled (88).

This week I heard Everclear's "Father of Mine." It's an older song, but an appropriate traditio in light of the Agamben reference.