"Another day wastes away"

Today the Church celebrates the liturgical memorial of St. Jerome. Jerome is best known for producing a new translation, at the request of Pope Damasus I, of both the Jewish Scriptures and the New Testament from their original languages into Latin. He accomplished his translation in the late fourth century. Gradually, over centuries, Jerome's translation replaced the collection of old Latin translations known as the Vetus Latina. His version is known as the "Vulgate," short for versio vulgata, meaning "commonly used version." 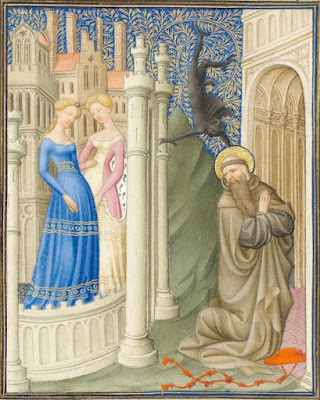 St. Jerome and the Dancing Girls, by Limbourg Bros, 1408

Next to translating the Scriptures, Jerome is known for being somewhat irascible and brutally honest. While living as a hermit Jerome wrote about a time he lay ill: "Daily I wept, daily I groaned...Though my only companions were scorpions, I often imagined that I was surrounded by dancing girls, who kindled the fires of lust." It was Jerome who said, "Prayer is a groan." It was also Jerome who insisted "that God has given us, at the moment of our birth, an angel to take care of it."