Reading Yuval Noah Harari's Sapiens: A Brief History of Humankind is proving enlightening. I realize he is trying to cover somewhere around 70,000 years of history in a single book, which is no easy task. I am not very far into the book, having only picked it up yesterday. Two chapters in, however, I am struck by Harari's deadpan reductionism. Even so, he readily agrees with Aristotle that human beings, or, to use his preferred term, Sapiens, are social animals. He also grasps that our sociability plays a huge role in our rise above other species and our mastery of the material world.

The second chapter of Sapiens is entitled "The Tree of Knowledge." For Harari, "The Tree of Knowledge" refers to what he dubs "the Cognitive Revolution," which evolutionary biologists tell us occurred among Homo sapiens somewhere between 70,000 and 30,000 years ago. According to Harari, apparently relying on various scientific opinions, none of which he cites, the Cognitive Revolution was brought about by a mutation in the DNA of Homo sapiens. On this view, the most important result of the Cognitive Revolution was more complex, or what we might call human, language. So, it is our complex languages that set us apart from the other species. I have no qualms with what he asserts about language. It strikes me as being as close to self-evidently true as any assertion can be, especially when we consider that mathematics, music, and logic are languages that cross human cultures. He could stand reading Wittgenstein, or even Derrida, on the relationship between language and reality. Moreover, even the Jewish view of the power of the word vis-à-vis what is.

Harari entitled the second section of his second chapter "The Legend of Peugeot." After reading it I have to surmise that what he postulates in this section will be key to the rest of the book. He begins by noting that human beings employ a great deal of language in what he calls "gossip," meaning much of our speech is geared towards our building, strengthening, or sometimes seeking to weaken, our social relations. In other words, language creates and regulates human activity in every sphere. He then asserts, "Any large-scale human cooperation - whether a modern state, a medieval church, an ancient city or an archaic tribe - is rooted in common myths that exist only in people's collective imagination" (27). He goes on to make an even stronger claim: these myths bear no relation and do not correspond to the material world, which he clearly sees as what is really real. This strikes me as a very problematic claim, which is a philosophical stance and not an empirical observation. Imagination is demonstrably a powerful force, which I doubt Harari would deny, but he draws conclusions that seem like attempts to thwart the power of imagination.

Harari then uses the foundation and perpetual existence of the Peugeot automobile limited liability corporation as a paradigmatic example of what he means. This leads him, in a very G.E. Moore-like manner, which Wittgenstein found infuriatingly naïve, to ask if the Peugeot automobile company really exists. The only sensible answer is, "Of course it does." Seeing Peugeot and, by extension, not only other corporations, but governments and religious institutions as fictions, that is, products of collective human imagination, he stumbles onto something quite insightful: human beings live from stories. But he seems to believe that stories, which flow from imagination, by their nature, are fictions. But is not the history he is seeking tell a story? If so, is it fictitious? All of this leads me to what I want to write about. 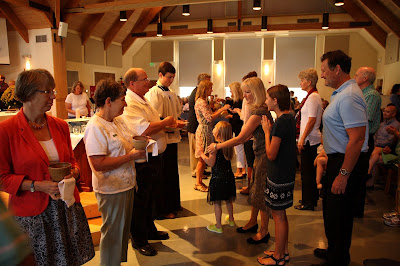 In "The Legend of Peugeot" section of his second chapter, Harari attempts an explanation of the mystery of the Eucharist. As one might guess, it is highly reductive. But my point is not to castigate Harari, who is Jewish, for not communicating a clear understanding of the Eucharist. Rather, his exposition of the sacrament bears a striking resemblance to how many Catholics understand it, that is, ex opere operato (see "Some hopefully ecumenical thoughts on the Eucharist"). I think showing how impoverished this view is can be done by citing how a non-Christian and perhaps even an atheist describes it:

How exactly did Armand Peugeot, the man, create Peugeot, the company? In much the same way that priests and sorcerers have created gods and demons throughout history, and in which thousands of French curés were still creating Christ's body every Sunday in the parish churches. It all revolved around telling stories, and convincing people to believe them. In the case of the French curés, the crucial story was that of Christ's life and death as told by the Catholic Church. According to this story, if a Catholic priest dressed in his sacred garments solemnly said the right words at the right moment, mundane bread and wine turned into God's flesh and blood. The priest exclaimed 'Hoc est corpus meum!' (Latin for "This is my body!") and hocus pocus [this is, indeed, the origin of the phrase "hocus pocus"]- the bread turned into Christ's flesh. Seeing that the priest had properly observed all the procedures, millions of devout French Catholics behaved as if God really existed in the consecrated bread and wine (30-31)

A few observations are in order.

First, he speaks of the celebration of Mass as something that happened in the past and has now been overcome by a more enlightened humanity. Second, it's interesting how he neglected to mention Christ's resurrection. Third, his insistence that priests create Christ from bread and wine. Finally, his understanding of the celebration of the Lord's Supper as largely a juridical affair. His description strikes me as a description of a pagan death cult. Sadly, too many devout Catholics, French, American, German, Italian, Polish, etc., view the Eucharist in these terms as well. In reality, the Eucharist doesn't happen independently of those who gather to celebrate it, only occurring when all the juridical regulations are strictly observed. Such a view smacks of belief in magic, a superstition. If the Eucharist does not flow from and nourish our humanity, our connection to one another, to those who are not us, and to the rest of creation, then it is nothing.

Isn't what Harari takes as true, namely that the only human species that survived, even if bearing some genes of otherwise extinct human species, Homo sapiens, survived and thrives only because we are social beings, worth asking a few penetrating questions? One word comes to mind in light not only of our inherently social nature, but also in light of the relationships we have with other species: Communion.
at September 03, 2016