At least on the surface, today's Gospel reading seems very complex. But Jesus himself interprets the story for us, demonstrating that it is surprisingly simple. Simple to understand does not mean easy to practice.

The story the Lord tells is about a thief, a dishonest steward. I think the first thing to note is that this story is not an allegory in which the master is God, the Father. The master in the story is cheated from beginning to end, including the arrangement for under-payment the dishonest steward makes with the master's debtors in order to ingratiate himself to them so he didn't have to dig or beg after being dismissed. Notice, in the end, the master does not rescind his steward's dismissal.

We are easily confused by the master's commendation of the steward for acting prudently and with foresight. The steward's prudence and foresight, however, consisted solely of looking out for himself at the expense of his master, which seems to be the reason he was dismissed in the first place. In the end, the master is happy that the dishonest steward will no longer have charge of his commercial affairs.

This is a story that does not lend itself nicely to telling a story about a story, which often serves to obfuscate rather than reveal. We need find out what Jesus, the greatest storyteller and preacher all of time, God-in-the-flesh, is saying to us. Our first reading from the prophet Amos gives us a clue. 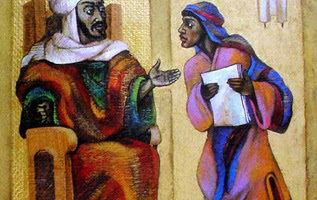 What Jesus tells his disciples, as they continue to make their way to Jerusalem, is that they should act with the same prudence and foresight in looking out for their future as did the dishonest steward. But the way to do this is by being children of the light, not children of darkness, The dishonest steward is a child of darkness who acts with a divided heart out of split loyalty. According to Jesus, the children of darkness know how to act shrewdly towards one another, looking out for themselves, acting with what we might call street smarts. Nonetheless, Jesus tells his disciples they must make friends with dishonest, or worldly, wealth so that when it fails them, as it inevitably will, they will have eternal life.

Contrary to the way the dishonest steward acted (i.e., dishonestly, looking out only for himself by cheating his master coming and going), how the children of light make friends with dishonest wealth is by not putting it first and not allowing themselves to be compromised by it, but acting in an upright and honest manner, keeping their destiny always in the forefront of their minds. Jesus is forthright when he says "No servant can serve two masters." It's impossible and inevitably leads to compromises. As Kierkegaard noted, Purity of Heart Is to Will One Thing.

The way to make friends with dishonest wealth is to act honestly and uprightly, being trustworthy, knowing who you serve. As Bob Dylan sang: "You Gotta Serve Somebody."
at September 18, 2016