Today we soberly observe the fifteenth anniversary of a horrific event that changed the world and not for the better. While people in the U.S. responded remarkably in the immediate aftermath of the 9/11 terrorist attacks, long term 9/11 has been a source of fragmentation and disunity. The result of this is being made manifest in an explicit way in this year's presidential election.

I reluctantly admit that I am suspicious of the "never forget" motto, which I am sure is now a popular hashtag. Of course we should never forget what happened that day, we should especially remember those who died so horribly. But if our remembrance is aimed at making us perpetually bellicose, intent on carrying out in perpetuity the lex talionis, then maybe we're better off forgetting. Instead, let's remember how we pulled together during trying times.

Fifteen years on I think it bears asking whether our long term response has made things better or worse. In this morning's Wall Street Journal, former vice president Dick Cheney, one of the architects of the U.S. invasion of Iraq, asserts that "Dangers Rise as America Retreats." Is this true? Are we retreating? You could've fooled me. Is war peace? 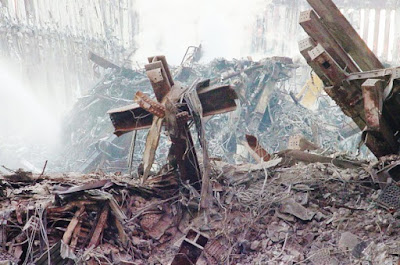 Personally, I believe we need to be more familiar with the dynamics of radicalization and ask whether our response has created more enemies than it's eliminated. In light of what causes radicalization, as a Catholic, I believe fostering a culture of encounter, as Pope Francis has called on us to do, is a more effective strategy in both the short and long terms. It beats the us versus them approach Donald Trump is urging with regard to Muslims, Latino migrants and others. I reject the politics of divide and conquer, which pretty well summarizes politics as practiced in the U.S. in 2016. You can fear refugees all you want, but shouldn't the sheer number of refugees prompt us to ask why they're fleeing, what they're fleeing? Shouldn't it also cause us to ponder how the reason they're fleeing their homes, which is no less traumatic for them than it would be for you or me, colors their perceptions of the people to whose countries they are flocking.

This week's readings are about mercy, about God's faithfulness, patience, and unfailing tenderness towards us. I am particularly struck by the power of Moses' intercession for his people. If we can't translate that into life as givers and not only as takers, then heaven help us.

May the souls of those killed on 9/11/2001, victims of evil, of man's inhumanity to man, rest in peace. May their memory be eternal. May those who died responding to those in need be rewarded for their sacrifice. May those who still grieve the loss of loved ones be comforted. May those killed fighting for the elimination of terrorism rest in peace. May all the innocents who have been killed in subsequent fighting experience the mercy of God, who is mercy,. Above all, may there be peace on earth.
at September 11, 2016