Truth and politics according to Havel

Rather than sit and endlessly brood, pine, worry, gripe, bitch, and fulminate in the face of the horrific public spectacle we have before us, namely our presidential election, I turned to the man I consider to be perhaps the only decent politician of the past 50 years for a ray of hope: Václav Havel. About a year ago I read Michael Zantovsky's biography Havel: A Life. I met my need today by checking out the only book in my local public library system written by Havel: Summer Meditations. He wrote the book in the summer of 1991, during the early years of his first and second presidency of Czechoslovakia, which was before Slovakia achieved independence.

The first chapter of the book is "Politics, Morality, and Civility." In this chapter Havel insisted that "genuine politics," the only politics worthy of being called politics, "is simply a matter of serving those around us: serving the community, and serving those who will come after us." At root, Havel asserted, politics is moral "because it is a responsibility, expressed through action, to and for the whole." This moral responsibility he dubbed "higher responsibility." It is higher "because it has a metaphysical grounding." The metaphysical ground from which the higher responsibility of politics grows, Havel strongly believed, is our "certainty," either conscious or unconscious, "that our death ends nothing." Our death ends nothing, according to Havel, "because everything is forever being recorded and evaluated somewhere else, somewhere 'above us.'" This certain reality Havel dubbed "the memory of Being." The memory of Being is "an integral aspect of the secret order of the cosmos, of nature, and of life, which believers call God and to whose judgement everything is subject." Most assuredly Havel did not believe "the memory of Being" to be judgement by future generations, who grow more and more forgetful with each succeeding generation; our loss of memory being a major contributor to our civilizational crisis.

At least for Havel, without such a metaphysical grounding nothing, least of all politics, makes sense. It is just this grounding, it seems to me, despite all of our pompous pseudo-religiosity, fake and/or poorly grasped and certainly not-lived Christianity, the U.S. has lost. Our pompous religiosity is perhaps the leading indicator we're trying to build on air. Why? Because it lacks any kind of seriousness and smacks of ideology and not a particularly enticing one. Nonetheless, our constitutional order was built on the kind of ground Havel insisted is so essential.

Perhaps Havel's best characteristic is that he never leaves you hovering over the earth at 30,000'. "As with everything else," he insisted, I must start with myself." He wrote about receiving all kinds of what most people would consider sound political advice and sticking with his conscience by ignoring it all. This is where Havel parts ways with any recognizable form of what counts for political leadership currently in the U.S.

He wrote about being told he "should be tougher, more decisive, more authoritative."

For a good cause, I shouldn't be afraid to pound the table occasionally, to shout at people, to try to rouse a little fear and trembling. Yet, if I wish to remain true to myself and my notion of politics, I mustn't listen to advice like this - not just in the interests of my personal mental health (which could be seen as a private, selfish desire), but chiefly in the interests of what most concerns me: the simple fact that directness can never be established by indirection, or truth through lies, or the democratic spirit through authoritarian directives 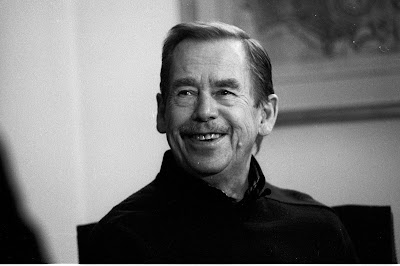 
In light of this he went on to admit that he did not know "whether directness, truth, and the democratic spirit will succeed." He was wise enough to grasp the fundamental thing of which we seem to have lost sight: "But I do know how not not succeed, which is by choosing means that contradict the ends." It is axiomatic that ends do not justify means, which is the formal way of stating something we all know- the road to hell is paved with good intentions.

Politics, in a nut shell, is about ends and means. Ends are what you set out to accomplish and the means are how you go about accomplishing your chosen ends. It seems to me we are losing the ability to distinguish means from ends, let alone judging between proposed ends or evaluating means. Even more problematic, both parties nearly always agree on ends, as if these are given and represent the demos, the people. They tend to differ, when they differ at all, on means. In the candidacies of Bernie Sanders and to a lesser degree of Donald Trump, we've seen some assertion by the people of desired ends that seem at odds with those that are imposed.

Any chance of success, Havel continued, tests on striving "for decency, reason, responsibility, sincerity, civility, and tolerance." The only acceptable way of striving "is decently, reasonably, responsibly, sincerely, civilly, and tolerantly." For the leader what matters, according to Havel, is not to long for or love power because this makes you willing to do anything to gain it and keep it. "I see the only way forward in that old, familiar injunction: 'live in the truth.'"

Our politics seems to me devoid of the truth. A recent article in the 8 September 2016 issue of The Economist, "Art of the lie," discussed our increasing disregard for the truth despite having access to so much information. All one needs to do to verify this is not only consider our compulsive need to fact check, but to think about how dishonest fact-checking has become. Maybe we've simply forgotten, or have never learned, how to think as human beings. While what is presented as a fact can be true or false in and of itself, a fact does not constitute the truth, which can only be reached by making a judgment. It is a complex, not a simple process. Havel grasped "that morality is, in fact, hidden in everything." This is why he never tired of arguing that art and culture must play a central role in society. It seems he grasped that beauty is what translates truth into goodness and that the Good, elusive though it be, is radiantly beautiful.

"Hope," Havel insisted in his book length interview with Karel Hvizdala, translated into English under the title Disturbing the Peace, "is definitely not the same thing as optimism. It is not the conviction that something will turn out well, but the certainty that something makes sense regardless of how it turns out."
at September 29, 2016

Email ThisBlogThis!Share to TwitterShare to FacebookShare to Pinterest
Labels: Community of the Heart, Philosophy, Politics