For love of country and neighbor

It occurred to me this morning that I haven't been posting much recently. Shortly after thinking that I came across an article that provoked me into a response: "Bobby Knight says if it were up to him, he'd 'have gotten rid of' Colin Kaepernick." My first reaction was, "But instead two universities, Indiana and Texas Tech, wisely chose to get rid of Bobby Knight."

Knight's method of coaching basketball consisted mainly of bullying, insulting, and intimidating players. His coaching method should've landed him in prison. I am not engaging in hyperbole. On more than one occasion Knight criminally assaulted players. He frequently and consistently made an ass of himself. In my mind he is the antithesis of everything sports, especially collegiate sports: is supposed to be about, excellence and character. I guess forced retirement (after Texas Tech fired him) hasn't changed him a bit. Colin Kaepernick has certainly demonstrated more character than Bobby Knight.

I am a veteran who served in a few theaters of combat over the course of my service. I am fine with what Colin Kaepernick and other NFL players are doing this season to draw attention to the problem of systemic racism that persists in our country. In my view, their peaceful protest is one of the things that makes the United States of America the United States of America. Would I do it? No, but it doesn't mean I seek to deny others their right to peacefully protest. For his part, Kaepernick has been more than respectful of those who have registered their disapproval of his protest, as his meeting in San Diego with Army veteran Nate Boyer demonstrates. Boyer, to give him due credit, also showed how we can disagree respectfully. 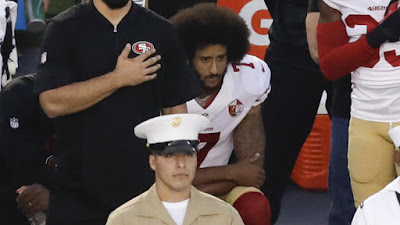 Let's face the fact that we do have racial problems in this country. Frankly, neither of the major party candidates for president have the credibility or any effective way to address our racial divide. Trump's not so understated racism might prove to be the flint that sparks the dry tinder. For her part, Clinton in the past did more than her fair share to paint all young black men as dangerous and likely criminals.

Not only does love of country not preclude being critical of one's country, from time to time it requires one to be critical. As a citizen of the United States I believe loving my country enough to sometimes be critical is precisely what it means to be patriotic, which for too many seems to equate to being idiotic. I am sometimes critical of my country because I love my country. I have the service to prove my love. If you want to question my patriotism, you'd better pack a lunch.

It's funny to me how so many of the people who are harshing on Kaepernick were sympathetic to Cliven and Ammon Bundy and the Oregon mob who seized a wildlife refuge threatening the use of deadly force, which was not a peaceful protest, but a half-assed attempt at an armed insurrection by a self-selected group of dangerous radicals who took it upon themselves to violently make federal land policy for everyone else. This disjunction- castigating Kaeprnick on one hand and supporting the Bundys on the other- really shows systemic nature of racial division in the U.S.A.
at September 24, 2016