I have been "binge watching" the BBC America original series Copper. It is a compelling drama about the Irish set in the Five Points section of New York City in the 1860s. I heard about this series in, of all places, Gilbert magazine. One scene, that is a climax of the first season, but not yet a catharsis, takes place in the parish Church between two NYPD detectives, Kevin Corcoran and Francis Maguire. Two great friends with some dark secrets that are about to gush forth in a confession (Season 1, Episode 9 "A Day to Give Thanks").

After returning Maguire's police badge that the parish priest found on the floor underneath one of the pews and that he, in turn, gave to Corcoran under duress. "Corky" was looking for Francis in order to settle scores. Here's the relevant bit of dialogue:

Corcoran: Churches are the only places in Five Points that are unlocked day and night. Even the taverns close eventually. I guess that means a man can go without a drink for a few hours, but not without the chance to repent. I haven't been to a proper Mass since before the [Civil] war. But, if you're Irish and Catholic, the teachings are in your head, inside you, forever, right? Confession, penance, grand reconciliation between man and God. See Father Burke, say a few Hail Marys, and you're free.

Maguire: It's what they taught us. 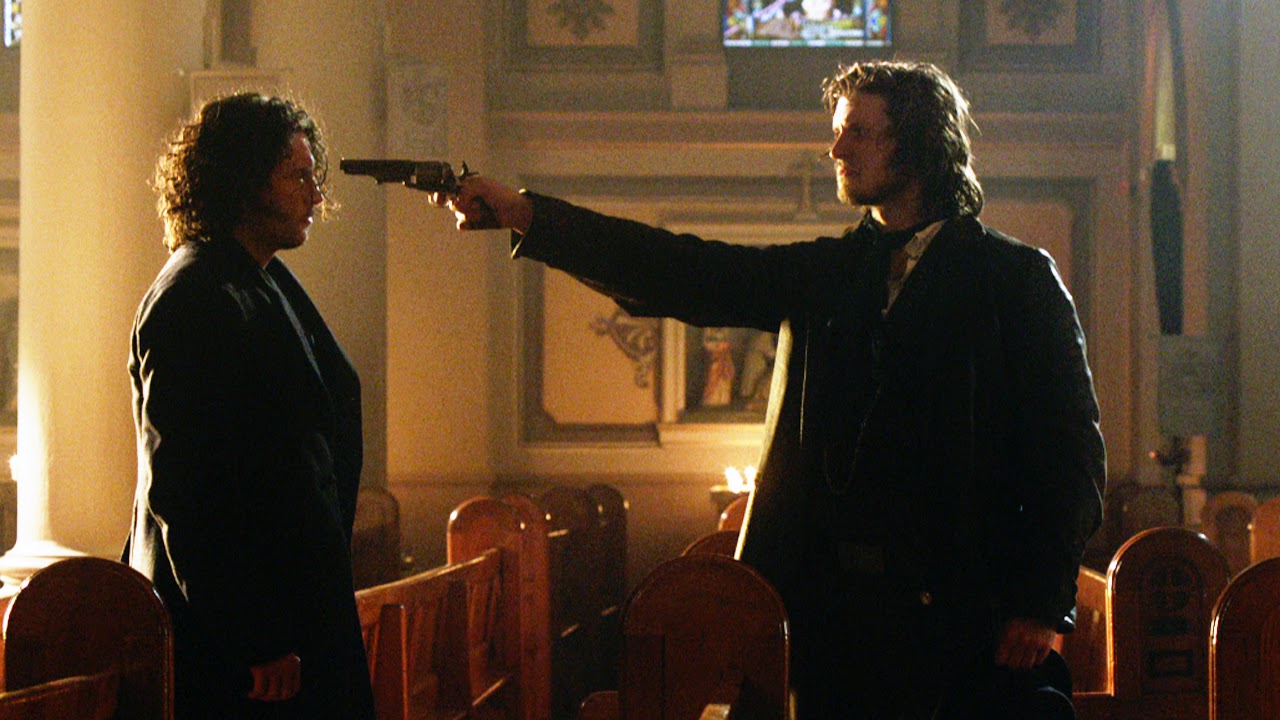 At least for me, the beauty (yes, beauty- true beauty is an awesome/awe-full experience, which is why, to borrow from Don Giussani, it leaves us wounded) of this scene is how the masks fall off and both men, in their confrontation with each other, are forced confront themselves. Maguire, who, it turns out, is guilty of several murders, all related to the matters they discuss, confronts himself more honestly than does Corcoran, the show's protagonist.

I am always struck by these words from the Act of Contrition, when, after I make my confession, I say to God, "In choosing to do wrong and failing to do good I have sinned against you, whom I should love above all things." I am struck because I realize in that moment how distorted my heart is. I hope one day to make a truly a good confession because I long to be free. Of course, it is in and through the Sacrament of Penance that the same sanctifying grace that God, in His infinite goodness, infused into our souls in Baptism, is given us anew: amazing grace, indeed.

As St Thomas Aquinas noted- grace builds on nature. More accurately, grace builds on fallen, deformed nature. It is through grace that God sets about reforming nature. The Sacrament of Penance is where grace confronts deformed nature, but only in order to reform it. Before being confronted by God, I must confront myself with the Truth.

It is by judging myself now and asking for God's mercy that I hope to survive God's final judgment. There one who accuses me "before our God day and night" (Rev. 12:10). I do not believe that this accuser accuses me of false charges. He only accuses me of things I have done. As difficult as it is to believe at times, I have an Advocate before God's throne and another one, the Parakeltos, who walks beside me. I also have my brothers and sisters who comprise the communion of saints, along with the angels, to intercede for me.

I cannot live more than a few hours without the chance to repent. We have a one word name for that: hope.
at November 09, 2014