All Souls: a reflection on death

Death can be scary. If nothing else, death is a mystery. Even in the blinding light of revelation life after death has its awesome (awe-filled/awe-full) aspects. Hence, it is understandable that in the face of death we are tempted to sidestep the reality that confronts us. It seems to me that the Dies Irae from the Requiem Mass helped Christians for centuries face the reality of death in a hopeful and yet unsentimental way. In light of that, I am always puzzled when, during funerals the deceased is raised to the altar, that is, canonized. I am even more puzzled when the celebrant then, via the liturgy, which is theologia prima, or "first theology" (thus showing is theology is concrete and not a mere abstraction), implores prayers for the one who has passed. If s/he is heaven, there is no further need to pray for them, right? At least to my mind, this discloses how frequently incoherent our understanding of last things has become. I am going to go out on a limb and insist that nothing impacts how we live more dramatically than our understanding of Last Things: Death, Judgment, Heaven, and hell.

Let's be clear. For the human person, looking at death from the perspective of Christian revelation, death is the most unnatural separation imaginable. God never intended death to happen. Hence, death is not, as many aver, "The most natural thing in the world." Death is the least natural thing in the world, which is why it fills us with awe, if not downright fear. For Christians, death is a temporary dislocation/dissociation. This is confirmed by St Paul in the fifteenth chapter of his First Letter to the Corinthians: "The last enemy to be destroyed is death, for 'he subjected everything under his feet'" (verses 26-27a). This gives me the chance to draw attention to something written recently by my friend, the brilliant young scholar Artur Rosman: "FACT: Christians DON’T Believe in the Immortality of the Soul." 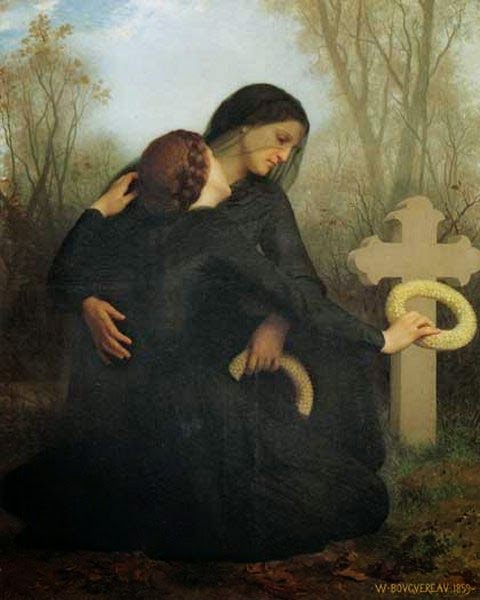 All Souls Day, by William Bouguereau, 1859

In an article he wrote back in 2000, "Good Grief and Bad", Msgr Lorenzo Alabacete, who passed into eternity just last week, gave beautiful expression to the inevitable questions that arise in the face of suffering and death, questions that do not lend themselves, at least not ultimately, to facile answers:

I suspect that today we are not supposed to expect that much of life. We are supposed to settle for less. What, then, do we expect of grief counselors? To help us suppress these embarrassing expectations of the heart? Is consolation after all a lowering of expectations? If anything, I am consoled by the Book of Job, which derides those who tried to explain Job's suffering to him. God does not seek to console him; He just shows up, and this is enough. It was not explanations Job wanted, but solidarity, compassion, love

By sending mixed signals, even though done with the very best of intention of giving comfort to those in grief, succeeding perhaps only temporarily, one chooses to simply set aside the deep and inevitable questions, thus causing cognitive and spiritual dissonance by approaching mysteries in a superficial manner. Do we no longer trust, or believe, what Scripture and Tradition tell us about Last Things? The specter of death coupled with any grasp of the awesomeness of God is something we all prefer to utterly avoid, which is why I found this observation of Von Balthasar's, made in his short book Who Is a Christian, so comforting: "But the Word of God holds us ineluctably and is so clear in what it states that it can at any time withstand the sorry amalgams into which people mix it."

In this context it's a bit ironic that what Balthasar is probably most famous for are some the "sorry amalgams into which" he (at least seemed at times) to mix Last Things. In the view of many, he did this in his provocative book Dare We Hope That All Men Be Saved?: With a Short Discourse on Hell,. While I think what he wrote is understandable and within the bounds of orthodoxy, many argue that he pulled back at the last minute from embracing the heresy of universalism (i.e., the belief that, in the end, everyone will be saved and/or that hell is temporary, not eternal- the latter postulation has its Christian source in the theological speculations of that great theologian of the early Church, Origen, and is known by its Greek name apokatastasis).

In the view of some, especially theologian Alyssa Pitstick, Balthasar, in his theology of Holy Saturday, also mixed a sorry amalgam. In her doctoral dissertation, which was published as a book entitled Light in Darkness: Hans Urs von Balthasar and the Catholic Doctrine of Christ's Descent into Hell, Pitstick called into question Balthasar's assertion that Christ, between His death and resurrection, actually suffered the pains of hell (in the Apostles Creed we profess that Christ "descended into hell"), instead of descending into what is known to Tradition as the "limbo of fathers," where the souls of the righteous went to await Christ's resurrection. In his doctoral dissertation, published recently as Will Many Be Saved?: What Vatican II Actually Teaches and Its Implications for the New Evangelization, Dr Ralph Martin sought to clarify these issues in light of the teaching of the Second Vatican Ecumenical Council.

It seems to me that as Christians we can do nothing other than commend those who die to God. This sounds easy, but it is not. In commending those who have died to God we are forced to acknowledge that judging them, one way or the other, is not up to us. Commendation of the dead to God is a huge act of trust, which is what makes it an act of hope. So, when we auto-canonize or auto-condemn (something I am pretty sure never happens at a funeral these days, which is good), we seek, wittingly or unwittingly, to steal God's prerogative. This is why through St Faustina Kowalaska, the Lord taught us to pray, "Jesus, I trust in You."

Since I invoked the saints, it is necessary to note that there may well be instances in which the holiness of the deceased person seems evident. But in even in such cases, before we proceed off-the-cuff, we need to know more in order to judge better, which is why there is a formal canonical process. There is no harm in noting the good qualities a person may have possessed, or even some of the good things s/he did that are memorable, or even exemplary. 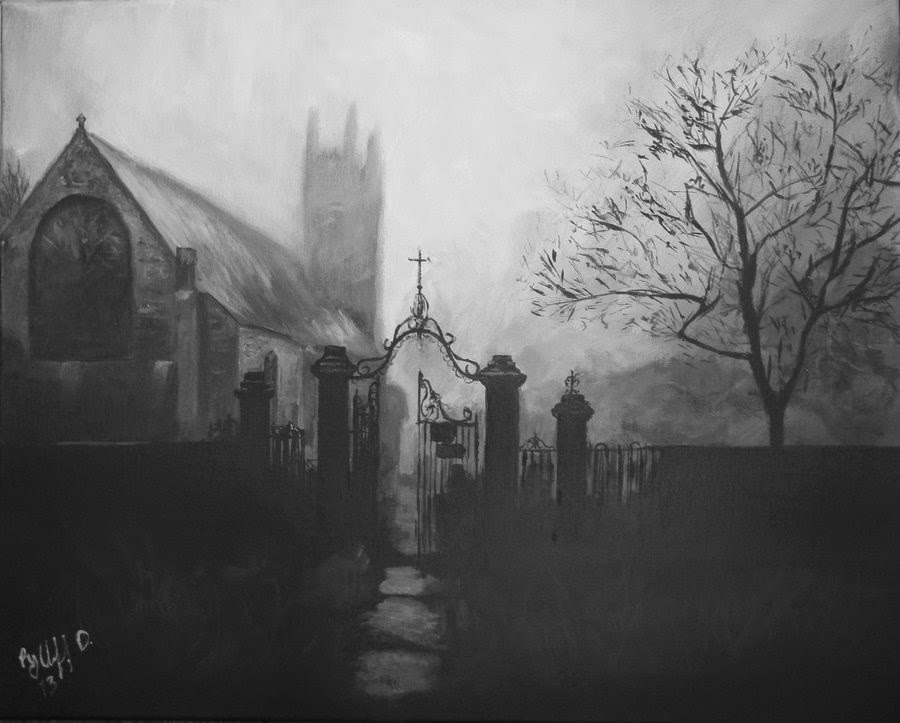 Fr Anthony Paone, S.J. observed in a reflection that is published in the popular daily devotional My Daily Bread:


Death, Judgment, Heaven, and hell --- these are the four last things toward which we are moving each hour of the day and night. They will never frighten us if our conscience is clear. If we love God in our daily life, that is, if we are sincerely trying to know and follow His holy Will, we have no reason to fear.

By keeping this eternal goal ever before us, we shall think straight when life’s problems and difficulties face us. In making the following meditations, we must strive to become *eternity-minded*. We must seek to guarantee to ourselves, as far as is in our power, the unending success and unmarred happiness of Heaven (p. 25)

We call this, living sub specie aeternitatis, that is, "under the aspect of eternity."
at November 01, 2014