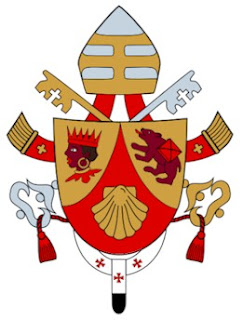 Dear Brothers and Sisters in Rome and throughout the world,
and all men and women, whom the Lord loves!

A light will shine on us this day,
the Lord is born for us"
(Roman Missal, Christmas, Entrance Antiphon for the Mass at Dawn)

The liturgy of the Mass at Dawn reminded us that the night is now past, the day has begun; the light radiating from the cave of Bethlehem shines upon us.

The Bible and the Liturgy do not, however, speak to us about a natural light, but a different, special light, which is somehow directed to and focused upon "us", the same "us" for whom the Child of Bethlehem "is born". This “us” is the Church, the great universal family of those who believe in Christ, who have awaited in hope the new birth of the Saviour, and who today celebrate in mystery the perennial significance of this event.

At first, beside the manger in Bethlehem, that "us" was almost imperceptible to human eyes. As the Gospel of Saint Luke recounts, it included, in addition to Mary and Joseph, a few lowly shepherds who came to the cave after hearing the message of the Angels. The light of that first Christmas was like a fire kindled in the night. All about there was darkness, while in the cave there shone the true light "that enlightens every man" (Jn 1:9). And yet all this took place in simplicity and hiddenness, in the way that God works in all of salvation history. God loves to light little lights, so as then to illuminate vast spaces. Truth, and Love, which are its content, are kindled wherever the light is welcomed; they then radiate in concentric circles, as if by contact, in the hearts and minds of all those who, by opening themselves freely to its splendour, themselves become sources of light. Such is the history of the Church: she began her journey in the lowly cave of Bethlehem, and down the centuries she has become a People and a source of light for humanity. Today too, in those who encounter that Child, God still kindles fires in the night of the world, calling men and women everywhere to acknowledge in Jesus the "sign" of his saving and liberating presence and to extend the “us” of those who believe in Christ to the whole of mankind.