Feast of the Holy Innocents

During these days immediately following Christmas we celebrate three very important feasts. We observe the Feasts of St. Stephen, St. John the Evangelist, and the Feast of the Holy Innocents. The Feast of St. Stephen is a special day for deacons, the Feast of St. John the Evangelist, which would have been observed yesterday were it not Sunday, but Sundays remind of the reason for any of it, is a day for priests. My friend, Paul Z., posted a wonderful Blessing of Wine to be given on the Feast of St. John. In my opinion, wine itself is a blessing. Today is the Feast of the Holy Innocents, a day that we honor the young men and women, boys and girls who serve at the altar.

Cathedral of the Madeleine Christmas pageant 2008 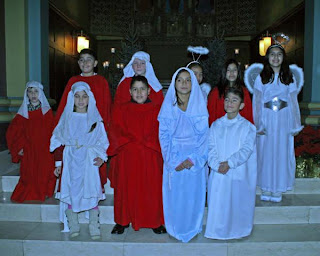 "Then Herod, when he saw that he had been tricked by the wise men, became furious, and he sent and killed all the male children in Bethlehem and in all that region who were two years old or under, according to the time that he had ascertained from the wise men. Then was fulfilled what was spoken by the prophet Jeremiah:

'A voice was heard in Ramah,
weeping and loud lamentation,
Rachel weeping for her children;
she refused to be comforted, because they are no more'" (Matt. 2:16-18)

In today's world with all the violence, especially in the Middle East, Afghanistan, and more recently in Pakistan, there is a lot of random violence that takes the form of suicide bombings, remotely detonated bombs, or stand-off attacks that kill indiscriminately. Along with innocent men and women, children are killed. A few weeks ago I watched the Brazilian movie The City of God. In the film there is a horrifying scene where two street children, one maybe five and the other seven, are cornered by a drug dealer who shot them both in one of their feet and then had a child about their age decide which of them should be killed. Let's not forget the many innocents who have been abused in the church. For those who follow things ecclesial, the child abuse crisis in Ireland reached a crescendo just before Christmas, revelations came forth in a government report that caused several bishops to resign for their failure to act to protect children. Archbishop Diarmuid Martin of Dublin, who was named to his post to deal with this situation, addressed this in his Christmas homily, which is painful and hopeful at the same time:

"It has been a painful year. But the Church today may well be a better and safer place than was the Church of twenty five years ago when all looked well but where deep shadows were kept buried.

"Paradoxically, such a false understanding of the place of the ordained priesthood in the Church has damaged priests. Many survivors of abuse and their families not only had a better understanding of the nature of abuse and its disastrous effects than did the experts of the Church and science. They also had a better understanding of the role and importance of the priest and the vocation of priests to be Christlike in a special way. Survivors turned to a priest sincerely and with idealism and they were met by betrayal of priesthood through abuse or distortion of the priesthood though lack of the care they had a right to receive."

He goes to say something about priests that is also needed and often neglected in this heart-breaking horror- "There are great priests in this diocese. They too feel betrayed. Many feel that I have not defended them enough and not supported them adequately at this moment. If I have failed them, from this Mother Church of the Archdiocese I ask their pardon. I recognise their dedication and I am sure that the people of the diocese do too." Nonetheless, he goes to says that the Church can only be renewed by "honestly and brutally recognising what happened in the past. There can be no glossing over the past. Renewal must begin with accepting responsibility for the past. Criminal behaviour must be investigated and pursued. Gross failures in management must be remedied in a transparent way. Current practice must be effectively monitored. Anachronisms left over from past history must be replaced." In the end, we look to the Word of God, who for us and for our salvation became human. Indeed, the Church writ large is called to constant conversion and renewal until we attain the fullness of the stature of Christ (Eph. 4:13).

All children have a right, an inherent right, to receive love and care. So, if you are a parent, a grandparent, an aunt or uncle, an older brother or sister, or a godparent, give a little one a hug today, let them know you love them, let them know they are safe and can grow up confident in your love and care. This should be especially easy since we are still basking in the glow of our celebration of the Lord's coming into the world as a helpless baby, the day after our observance of the Feast of the Holy Family, and the day we remember the Holy Innocents.
at December 28, 2009