On the feast of Stephen

Today marks the feast of my patron, St. Stephen (Στέφανος in Koine Greek). He is also the heavenly patron of this blog, the mission of which "is to foster Christian discipleship in the late modern milieu in the diakonia of koinonia." Stephen was a Greek-speaking Jew, one of the seven men set apart by the apostles to help with daily distribution in the earliest Christian community in Jerusalem. These seven Greek-speaking Jewish men, one of whom was a convert to Judaism, are viewed as the first deacons, though they are never referred to in Scripture by this title. However, a deacon is not defined by a title, but by service. After all the Greek word diakonia, from which the noun diakonos is derived, means service. Hence, all Christians are called to be deacons in a very real sense by virtue of our baptism and confirmation. One who is ordained a deacon is ordained to service and is to sacramentally embody the link between the liturgy and Christian life, between liturgy, witness, and service. This is one reason why the deacon sings or says the dismissal at the end of the Mass. This is a sending forth of all who have received Christ into the world to be Christ for others through selfless service.

These seven men were called to help bring peace to a young community that had grown somewhat fractious due to the fact that the Greek-speaking members felt that Greek-speaking widows were not getting their fair part of the daily distribution of food. Their call was a call to diakonia of koinonia- a call to the service of communion so that the apostles could devote themselves fully to preaching. In a way, it shows us something with which all Christian communities struggle, what makes us different, language, culture, or whatever. Yet, we profess to be one in Christ. Let's look at the account of their call:

"At that time, as the number of disciples continued to grow, the Hellenists complained against the Hebrews because their widows were being neglected in the daily distribution. So the Twelve called together the community of the disciples and said, "It is not right for us to neglect the word of God to serve at table. Brothers, select from among you seven reputable men, filled with the Spirit and wisdom, whom we shall appoint to this task, whereas we shall devote ourselves to prayer and to the ministry of the word." The proposal was acceptable to the whole community, so they chose Stephen, a man filled with faith and the holy Spirit, also Philip, Prochorus, Nicanor, Timon, Parmenas, and Nicholas of Antioch, a convert to Judaism. They presented these men to the apostles who prayed and laid hands on them. The word of God continued to spread, and the number of the disciples in Jerusalem increased greatly; even a large group of priests were becoming obedient to the faith" (Acts 6:1-7).

However, before the end of the sixth chapter of The Acts of the Apostles, Stephen, too, is preaching. Stephen's preaching drew the attention of other Jews who saw nascent Christianity as a heresy, not least among whom was Saul of Tarsus, and at Saul's behest Stephen was stoned to death becoming the first martyr for the faith. He is referred to as proto-martyr because his martyrdom set the form for future witnesses. In his encyclical Deus Caritas Est, Pope Benedict wrote that "[t]he Church's deepest nature is expressed in her three-fold responsibility: of proclaiming the word of God (kerygma-martyria), celebrating the sacraments (leitourgia), and exercising the ministry of charity (diakonia)" (par. 25a). In St. Stephen we move from theoria to praxis, to the concrete embodiment of what this looks like. 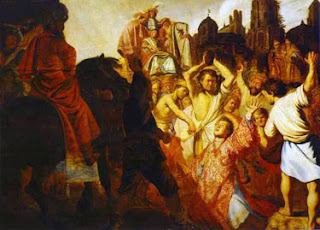 In the Christmas issue of Magnificat is an article by the Jesuit, Fr. Alfred Delp, who himself died a martyr's death under the Nazis in 1945. In this lovely reflection he writes that because God became a man "[h]istory now becomes the Son's mode of existence; historical destiny becomes his destiny. He is to be encountered on our streets. In the darkest cellars and loneliest prisons of life, we will meet him. And that is already the first blessing and consecration of the burden: that he is to be met under its weight." He goes on to say that second blessing is that we feel a new power to bear this weight and the third blessing that results from God becoming man for us is that Jesus Christ provides the model of how to live in a truly human way, what Fr. Delp called "the primordial model of existence." We will be formed according to this model if we, like St. Stephen, "do not resist this formation." According to Delp "[t]he strength for mastery of life grows through the influx of divine life among those to whom Christ has made himself known, among the greater human community as well as small groups brought together by circumstance." In Christ, with Christ, and through Christ "[s]omething new has been born in us, and we do not want to tire of believing the star of the promises and acknowledging the singing angels' Gloria - even if it is sometimes through tears." Like St. Stephen, who saw Jesus at the right hand of God as he was being stoned, which vision allowed him forgive those who were killing him, which meant for him in that moment bearing the weight of what could well be seen as a terrible reality, "[o]ur distress has truly become transformed, because we have been raised above it."

With a deep diaconal bow to my friend Paul Z., who blogs over on Communio, here is a news item about the Holy Father's Angelus remarks on this lovely feast: On St Stephen’s, we remember believers who are tested or suffer because of their faith.