Fish gets roguish about Palin

While still an undergraduate I had the opportunity to listen to Stanley Fish give a lecture on his academic specialty, John Milton's poem Paradise Lost. The particular focus of the lecture was "the fall" and its aftermath: the woman and the man eating the fruit of the tree of good and evil. I especially remember him calling the man’s blaming the woman, when confronted by God about his disobedience, “the first domestic dispute.” For reasons I have never quite been able to understand, Fish remains a very controversial academic. I can only surmise that it is because he refuses to get on-board with any particular agenda, or ideology, and is not hesitant to make and defend complex arguments, refusing to be reductive. I know for quite a few years he was labeled, both with some justification, but at times unjustifiably, as a so-called Derridian deconstructionist. As a result of this labeling/libeling he is sometimes viewed as a rank relativist, which he has never been. In my view, Fish is a relentlessly honest reader and commentator, with whom I frequently disagree. I like that Fish is interested in those who disagree with him, taking their points and arguments seriously. Over the past year or so, I have really enjoyed reading his New York Times column, in which he discusses books, contemporary issues, and responds to readers who post comments to what he writes. What really sets Fish apart is that he gives authors, even the authors of comments to his columns, the benefit of the doubt by trying to see their points, even when poorly expressed.

The other day I posted the video of William Shatner doing a beat reading from Sarah Palin’s autobiography, Going Rogue, which ended with a similar reading by Gov. Palin of an excerpt of Shatner’s autobiography, Up Till Now, from The Tonight Show with Conan O’Brien. I really have to say that my opinion of Gov. Palin is slowly evolving and for the better. I am not sure I want her to be president (I am not sure she wants to be, which is one reason my opinion of her is on the up-tick), but I think she is a valuable voice in our civic life. You can complain all you want about her fear of "death panels," but her hyperbolic point focused attention on a part of the massive health care reform bill that otherwise would have been ignored, a part that seeks to deal with end-of-life issues, at least to an extent, by law and under the radar. She certainly got the better of Al Gore in their recent exchange on climate change. In other words, she is rapidly becoming a political force to be reckoned with, which is good. 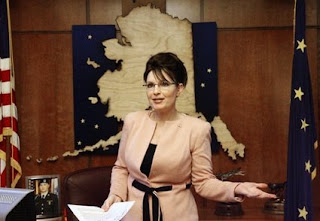 What do Stanley Fish and Sarah Palin have to do with one another? Well, Fish writes about Palin’s autobiography and then responds to predictable protests from Times readers about the fact that he liked the book. He begins his initial column on Palin’s autobiography by describing his experience trying to purchase Going Rogue at Strand Bookstore in Manhattan. After asking the sales assistant, whom he describes as a "bright young thing," a description much disliked by many readers, where he would find the book, he writes that she looked at him "as if I had requested a copy of 'Mein Kampf' signed in blood by the author." Apparently, he went to a nearby Barnes & Noble, "where, presumably, readers of dubious taste and sensibility" shop, to buy it. Fish goes on to make the judgment that Going Rogue is "compelling and very well done." It is important to ask by which criteria he arrives at this judgment. True to form, Professor Fish does not leave us in the lurch:

"My assessment of the book has nothing to do with the accuracy of its accounts. Some news agencies have fact-checkers poring over every sentence, which would be to the point if the book were a biography, a genre that is judged by the degree to which the factual claims being made can be verified down to the last assertion. ‘Going Rogue,’ however, is an autobiography, and while autobiographers certainly insist that they are telling the truth, the truth the genre promises is the truth about themselves — the kind of persons they are — and even when they are being mendacious or self-serving (and I don’t mean to imply that Palin is either), they are, necessarily, fleshing out that truth." In typical Fish fashion, he goes on to make a statement that is easily misread: "autobiographers cannot lie because anything they say will truthfully serve their project, which, again, is not to portray the facts, but to portray themselves." In order to be understood, this statement has to be read in light of his two-fold criteria: "(1) Does Palin succeed in conveying to her readers the kind of person she is? and (2) Does she do it in a satisfying and artful way? In short, is the book a good autobiographical read? I would answer ‘yes’ to both." Prof. Fish even deals with the predictable complaint that it was ghostwritten.

Fish succinctly states why my opinion of Sarah Palin is evolving and changing for the better when he writes that "[i]In the end, perseverance, the ability to absorb defeat without falling into defeatism, is the key to Palin’s character." He ends his ruminations on Gov. Palin by warning "[h]er political opponents, especially those who dismissed Ronald Reagan before he was elected, should take note. Wherever you are, you better watch out. Sarah Palin is coming to town."

In his follow-up column he clarifies his biography/autobiography distinction in this way: "a biographer is saying, 'This is the way it was'; an autobiographer is saying, 'This is the way I saw it and remember it'." He goes on to deal with complaints about his previous column, which he groups into four distinct categories. He takes on the most salient of these, which have to do with his audacity to write anything positive about Gov. Palin, like the one from Connie Boyd, who complained that Fish wrote "a love note to [Palin] in the New York Times," which is apparently tantamount to leaving a dookie in a sacred shrine. Connie goes on to ask Fish if he has any "sense of responsibility left?" Fish responds by stating that his "sense of responsibility" is "to the column [he] sat down to write, not to the columns some readers wanted [him] to write or thought [he] had in fact written." He tries to clarify by dismissing the reductively ideological. "Celebrations and denunciations of Sarah Palin are a dime a dozen. I was after something else." To make these two points more clearly, he ends his second column by citing Emily Noon’s not so subtle comment that in her recollection Fish likes "the devil in Paradise Lost too." In defending his objectivity he reminds Ms. Noon that "[i]t is a matter of record that [he has] been the most reliable and vociferous anti-Satanist in the world of Milton studies for more than 40 years. Yes, facts do matter."
at December 15, 2009