Our Annual Festival of All Hallows and All Souls*

Halloween was brought into being by the ancient Celts who lived in Ireland, Scotland, Wales and Brittany. The celebration precedes their conversion to Christianity. For the ancient ones, 1 November marked the beginning of a new year and the coming of winter.

Showing the requisite Celtic spirit, the night before the new year, the Celts celebrated the festival of Samhain, who, in their mythology, was lord of the dead. They believed that during this festival the souls of the dead—including ghosts, goblins, and witches—returned to mingle with the living. To scare away the ghosts, goblins, and witches, they would don masks and light bonfires and, in true Celtic form, drink fermented grain and distilled grain bevies (i.e., beer and whiskey).

When the Romans conquered the Celts, they added their own touches to Samhain. These customs included making centerpieces out of apples and nuts for Pomona, the Roman goddess of the orchards, bobbing for apples and drinking (hard) cider. So, where, you might ask, does the Christian aspect of the holiday begin? 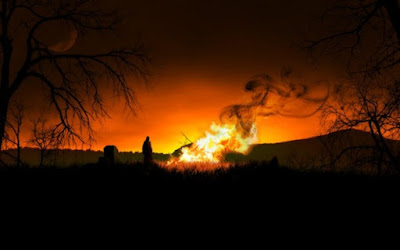 In AD 835, likely as the result of the widespread nature of what began as a Celtic custom, Pope Gregory IV moved the celebration for all martyrs (later all saints) from 13 May to 1 November. For most Eastern Christians, All Saints is still observed in the late Spring or early Summer (the Sunday following Pentecost). Eventually, the night before All Saints became known as All Hallows Eve. In time the name was shortened to Halloween.

The custom of setting apart a day to intercede for our faithful departed dates to the eleventh century. It was begun at the Benedictine monastery of Cluny, France. In particular, it was the fifth abbot of the abbey, St. Odilo of Cluny, who started All Souls Day. Given the influence of Cluny, this custom spread to other Benedictine communities associated with Cluny. Before long commemorating the faithful departed on 2 November was practiced in several dioceses in France before spreading throughout the Western Church. It was quite late coming to Rome, where it was accepted in the fourteenth century.

All Souls Day brings to an end our annual three-day festival of the communio sanctorum, which was centuries in the making. This festival is just the beginning of the month during which we remember our beloved dead. Our month of remembrance ends with the observance of the feast of Christ the King. On this feast, the Church celebrates the end of time, when Christ will return to judge the living and the dead.

That's it for October. I am glad I started blogging again in earnest.

* This post first appeared yesterday on The Boy Monk blog.
at October 31, 2017