What a week! I do not mean that in an exuberant way. What happened in Las Vegas last Sunday night still weighs heavily on my heart (to use what many would dismiss as a silly Christian expression). I am sure the massacre (what else can you call the shooting of more than 500 people?) weighs heavier still on those who were wounded, on the survivors, and those who lost loved ones in that indescribably terrible attack. One of the things that gives me hope when catastrophe strikes, whether it is a natural disaster or an unnatural act of terror, is how selflessly many people respond. Reading and hearing about how remarkably many people responded in Vegas when the shooting started made me think that we should not wait until we're in the middle of a catastrophe to start helping those in need.

In the wake of the most recent and faraway the worst mass shooting in the United States, it is bad enough to assert that we are powerless in the face of the epidemic of firearms violence. But it is unconscionable to insist there is nothing we should do to further regulate and restrict the sale, purchase, and possession of firearms and certain deadly accessories. My full response to what happened in Las Vegas is on The Boy Monk blog: "Mercy Provokes Us."

It seems more important than ever to remind everyone that October is the month of the Most Holy Rosary of the Blessed Virgin Mary. I invite all who read this to commit praying 31 rosaries this month. A "Rosary" consists or praying one complete set (five) of any of the four sets of Mysteries (Joyful, Luminous, Sorrowful, Glorious). So, if you haven't started, please begin today. Tomorrow we celebrate the Memorial of Our Lady of the Rosary. 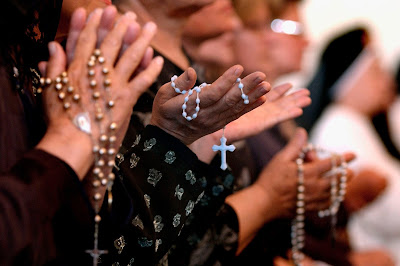 From my perspective, our opening event for the six-part ecumenical series in observance of the 500th anniversary of the Reformation went well. It took place this past Wednesday at Good Shepherd Lutheran Church in Sandy, Utah. It just so happens that our opening event was on the Feast of St. Francis of Assisi. I mention my brother deacon Francis because he was a great Church reformer in his own right, one who had many of the same concerns the sixteenth century reformers had. I posted my opening remarks: "On the Reformation."

Here's something I did not include in my remarks, but kinda wished I had:

If Dean Wormer of Faber College had been dean of the College of Cardinals in the late-15th, early-16th century, he could've told newly elected popes what he told the members of Delta Tau Chi:

"Fat, drunk and stupid is no way to go through life." The course of what we call Western Civilization might've been much different

Finally, Tom Petty passed away this week at the way-too-young age of 66. Writing for the The New Yorker, Amanda Petrusich had the best tribute to Petty: "An Appreciation of Tom Petty."

... I’m fairly certain Petty knew how it felt to be us. He wrote with deep restraint and concision, which is why his songs always feel airborne, but what kills me are his articulations of ordinary, 3 P.M.-on-a-weekday business. Petty understood how to address the liminal, not-quite-discernible feelings that a person might experience in her lifetime (that’s in addition to all the big, collapsing ones—your loves and losses and yearnings)

When I was in college when a friend of mine and I took a road trip to Southern Utah. This was long before satellite radio and so for a good portion of the trip we had no radio reception. We only had a few cassette tapes with us. One of those was Tom Petty and the Heartbreakers' Full Moon Fever. On our drive home, we listened to this album several times. I still know the words to all the songs from Full Moon Fever. My two favorite songs from the album are "Free Fallin," which was our Friday traditio way back on 27 November 2009, and "Runnin' Down a Dream," which is our Friday tradito for today: