Luther and fraternal correction of the Pope

The trouble with the meme below, which I've seen plastered all over FB this past week, is that in posting his 95 theses Luther was not issuing a fraternal correction to Pope Leo X. At least with regard to his personal conduct, Leo certainly could've used a correction from an austere monk, which Martin Luther was in 1517. To wit, what Luther did is not analogous to what the "fraternal correctors" of Pope Francis are doing. Luther's initial aim was much more modest. Analogy fail. 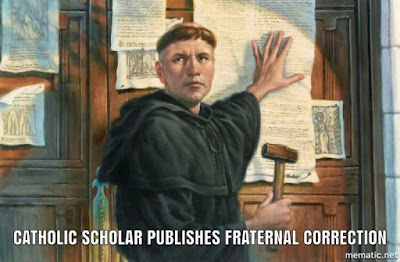 Formally, Luther addressed his theses to the local bishop. The local bishop was one Albert of Brandenburg. It was Albert who authorized the sale of indulgences in his dioceses. Dioceses plural, you may ask? Yes. Albert was simultaneously bishop of Magdeburg and archbishop of Mainz. He purchased both these offices, which left him in debt. The chief salesman of indulgences in and around Wittenburg, the Dominican John Tetzel, was in Albert's employ. Albert kept half the proceeds of the sale of indulgences. The other half went to Rome.

What Luther sought by posting his theses was an academic disputatio, which were very common in the universities of the day. He wanted to focus on the sale, dispensing and efficacy of indulgences as well as papal authority (Did it extend beyond the grave? Nope, is the short answer). At this point and for quite a number of years afterward, he did not reject indulgences.

Let's be honest, if Leo X had been smart, he would've heeded Cardinal Cajetan's initial assessment of Luther's 95 theses: he found nothing heretical. There is a lot of gross ignorance among Catholics about how f#$*ed up the Church was at the time of the Reformation. The fact that the Holy See totally tubed its response to Luther is a story Catholics need to learn.