More on Luther and the Holy See

Whose work informs my views on Luther, his theses and Cardinal Cajetan? Well, that of many scholars both Protestant and Catholic. Most recently, Dr Seymour House, who teaches at Mount Angel Seminary in Oregon, introduced me to the work of Fr. Jared Wicks, SJ. Fr. Wicks's doctoral dissertation, directed by none other than one Joseph Ratzinger, was on Luther. Published back in the 1980s, it was revolutionary for Catholic Reformation scholarship. Here's the best thing I could find on Fr. Wicks to pass along on short notice: "An Interview with Jared Wicks, S.J., Catholic scholar of Luther."

As far as Martin Luther and Cardinal Thomas Cajetan- they encountered each other from 12-18 October 1518 in Augsburg, Germany. Cajetan was sent on a mission: to get the troublesome Augustinian to recant what had been deemed heretical in his 95 Theses and his other public pronouncements, particularly his Sermon on Indulgences and Grace, up until that time. This was not an academic disputatio, but an inquisition. Luther approached it as such, which is to say ready to fight.

Suffice it to say, when it comes to Luther, theological reasoning did not win the day, which was hardly surprising given the politics and the sorry state of the Church at the time. To state that Leo X's interpretation of Luther's teaching as set forth in 41 condemned theses in Exsurge Domine leave something to be desired is merely to re-state a widely held scholarly view. While Exsurge dealt with more of Luther's teachings than those found in his 95 theses, it is not controversial to assert that the bull did not do a good job in of capturing Luther's theological concerns and so did not adequately deal with them. This, in turn, calls into question at least some of the grounds on which he was condemned as a heretic.

Prior to his 95 Theses, Luther had published nothing. This was not usual for professors of the day. The printing press was still relatively new and the printing business would only find its economic footing as the result of Martin Luther's prolific efforts and his deep involvement in the layout and publication of his works. While printers made a lot of money off Luther's writings, as an author he did not.

Between the publication of his theses and his encounter with Cardinal Cajetan, Luther had only published his Sermon on Indulgences and Grace in March 1518. Between October 1518 and the promulgation of Exsurge Domine there was only the disputation in Leipzig at which Luther spoke.

I suppose an example is in order. So, below are the first two of Luther's 95 theses:

When our Lord and Master Jesus Christ said, "Repent" (Mt 4:17), he willed the entire life of believers to be one of repentance

This word cannot be understood as referring to the sacrament of penance, that is, confession and satisfaction, as administered by the clergy 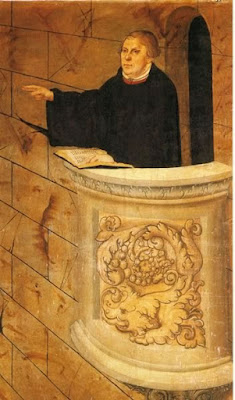 In Exurge Domine, Pope Leo X clearly had no problem with thesis 1. Keeping in mind Luther was first and foremost a Bible scholar, who knew Koine Greek and was highly proficient in Hebrew, his assertions in both theses likely seemed reasonable not only to him but some other Catholic theologians of the day as well. But at the very beginning of his Sermon on Indulgences and Grace, Luther, a Biblical humanist who took his cue from St. Bernard of Clairvaux (a must read for anyone who wants to grasp Luther's Catholicism is Franz Posset's Pater Bernhardus: Martin Luther and Bernard of Clairvaux), took the scholastics to task when he stated:


First, you should know that some new teachers, such as the Master of Sentences, St. Thomas [Aquinas], and their disciples, divide [the Sacrament of] Penance into three parts: contrition, confession, and satisfaction. And, although this distinction and opinion of theirs is scarcely or not at all to be found based in Holy Scripture or in the ancient holy Christian teachers, nevertheless we will pass over this for now and speak using their categories

This is what likely led to this condemnation, the fifth one, found in Exsurge Domine:

That there are three parts to penance: contrition, confession, and satisfaction, has no foundation in Sacred Scripture nor in the ancient sacred Christian doctors

In his work On the Babylonian Captivity of the Church, published in October 1520, not only after the promulgation of Exsurge, but after the 60 days the bull gave him to recant, along with Baptism and Eucharist, Luther affirmed Penance as a sacrament. Now, Luther's view as to how the sacrament is efficacious in light of his Sermon certainly prompts questions. But to assert that penance conceived of as contrition, confession, and satisfaction is not scriptural or even all that traditional is not necessarily to deny these elements are consistent with revelation. In fact, Luther did not deny the first two at all. He unequivocally held that one should be sorry for one's sins and confess them. The issue, therefore, became that of satisfaction. Luther's problem with satisfaction arose from how indulgences were sold. Indulgences were marketed as doing away with the need for satisfaction. It is fair to say he also had a problem with how satisfaction was conceived of by the schoolmen: performing good works in order to be forgiven.

By focusing on the importance of contrition for sin, Luther held that being truly sorry for one's sins led one to do good works, that is, pray, fast, and give alms. Here is what Luther said in his Sermon:

For this Bible scholar, what else could Jesus's call to metanoia mean except to be sorry for one's sins, to have a change of mind and heart, to be contrite and be converted? In essence, what Luther's attempted reform was about was the conversion of Christians, the interior movement of the Spirit as opposed to merely external observances.

It must be admitted that Luther's temperament after Augsburg and Leipzig was such that when challenged he was prone to take his positions to their extremes. One can see this in his disputation with Erasmus concerning Christian freedom.

One might also explore Luther's condemnation in Exsurge (condemnation 2) on the ground that he held infants, after Baptism, still suffered the effects of original sin in light of the Catholic Church's teaching on concupiscence, which also seeks to explain why Christians continue to sin after Baptism.

With that, apart from my remarks for my presentation in November on What the Catholic Church Learned from the Reformation, I have done my due diligence as a Catholic blogger to observe the 500th anniversary of the publication of Luther's 95 Theses.
at October 08, 2017