The Baptism of Jesus: Divine and Human Paternity

I am not surprised that the best thing I read this year on the Lord’s Baptism was written by an Evangelical pastor. Writing in Christianity Today, Jeff Strong, who pastors a Covenant Evangelical Church in British Columbia, shares his experience of growing up with a Dad whom he describes as being apathetic towards him. While he admits that his father’s indifference, which persists even now, still haunts him, he shares a powerful testimony to the healing power of the Gospel. The power of his testimony does not lie in some silly, imagined “cure” of the kind often claimed by people who would simply rather not grapple with things as they are, such as a moment when his Dad’s indifference simply stopped mattering to him (I think one would have to question the divine origin of such a realization), but derives its power directly from the Gospel.

I was blessed with a loving father. However, my Dad (who passed away 5 years ago next week) and I were very different people. We went through a fairly prolonged, but not bitter, estrangement for 5-6 years when I was in my 20s. I have no doubt this stemmed from the choices I made that either actually disappointed him or that I imagined disappointed him. Chief among these would be leaving Mormonism and becoming Catholic, perhaps followed closely by my decision to study Philosophy and History, which he largely viewed as a waste of time and money. Our estrangement, which was never total, only ended when I married. No matter what, I knew my Dad loved me. We had a wonderful relationship the last 18 years of his life, a grace for which I am very grateful.

Unlike Strong, my Dad was neither apathetic nor indifferent towards me, but neither was he terribly pushy, even if he did take opportunities once in a while to criticize me, especially when I was younger and simply trying to find my way in the world. I accepted then as I do now that it is sometimes a father’s duty to set forth expectations for his children, especially as they become young adults. In my experience both as a son and as a father, this can cause resentment and bitterness on both sides. Nonetheless, I think it’s important to help my children move from being what I call pseudo-adults, someone who has reached his majority and claims all the rights and prerogatives of adulthood, to becoming an authentic adult, someone who also assumes the duties and responsibilities that come with being an adult.

While it is certainly no original conclusion, my overall point is that human fathers are, well, human. Stretching my articulation of the obvious, children of human fathers are also human. Being human not only means that we’re limited, but also that we’re sinful. In other words, we can do the right things in the wrong way; good intentions don’t always result in good acts.

In my 21+ years of being a father I know it is all too easy to violate St Paul’s exhortation not to provoke our children (Eph 6:4; Col 3:21). I know I am guilty of such provocations, especially when I consider my relationship with my oldest son. The transliterated Greek word translated “provoke” in Ephesians 6:4 is paragizo, which means something like “do not deliberately anger.” In Colossians 3:21 the transliterated Greek word translated as “provoke” is ereqizo, which comes closer to meaning “exasperate.” I am convinced that, at some point, all of us must learn to accept the humanity of our parents, which means, among other things, forgiving them for things both real and imagined. At least for me, this was/is no easy thing. 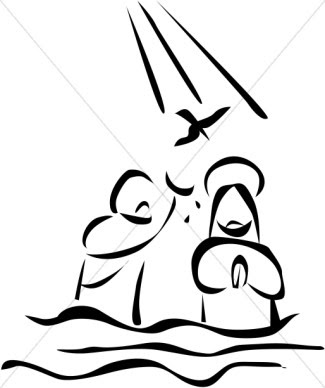 Commenting on Jesus’ baptism according to St Mark’s account of the Lord's baptism, which is conveyed in three verses (Mark 1:9-11), Strong notes, “We witness both beauty and heartache.” This theophany, which is the first explicit manifestation of God’s triunity, this “outpouring of love and affirmation from the Father,” occurs prior to the Lord “setting his face toward Jerusalem – and toward the cross.”

Strong points out a fact in light of the chronology of our Lord’s life: this outpouring of the Father’s infinite and æternal love for his Son occurs before Jesus performs one deed, utters one teaching, or performs one miracle. This is genuine fatherhood! “God,” Strong points out, “is the kind of Father who would disrupt reality in order to show his Son just how much he delights in and loves him.”

Rather than being off-putting, the divine paternity of God should be the rock on which we, as Christians, build our lives. Improbably, no matter what, God loves you and there’s nothing you can do about it. Jesus Christ is proof-positive that we are God’s children whom he loves and with whom he is well pleased: “In this is love: not that we have loved God, but that he loved us and sent his Son as expiation for our sins” (1 John 4:10).

This strikes me as a fitting note for me as I embark on this brief season of Ordinary Time, which I plan to use as a preparation for the holy season of Lent.
at January 12, 2016