Like many people, I was surprised to learn early this morning that David Bowie passed away. His passing came two days after his sixty-ninth birthday. It was on his last birthday that his 25th album, Blackstar, was released. No doubt there are many better places where you can read about David Bowie’s life and accomplishments. I just wanted to pass along some thoughts one might expect to find on the blog of a clergyman on the passing of such an influential artist.

One cannot have any familiarity with David Bowie’s life and music and not have a sense of the depth from whence most of it came. I found it interesting to read in an article in the Guardian newspaper that Bowie did not consider himself to be a naturally gifted performer and once confessed that he did not really enjoy performing live. The same article quotes Bowie as saying, "My entire career, I’ve only really worked with the same subject matter. The trousers may change, but the actual words and subjects I’ve always chosen to write with are things to do with isolation,abandonment, fear and anxiety," then in what I can only imagine to be a wry tone, he said, "all of the high points of one’s life." 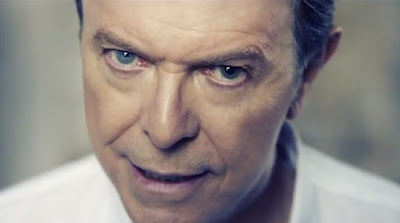 In 2004 he told Ellen DeGeneres that he tried Christianity at one point. Apparently the point at which he tried turning to Christ was a very low-point, occurring shortly after he achieved fame with his Ziggy Stardust persona, towards the end of a few years he spent mostly in Southern California in the grip of what was, by all accounts, a serious cocaine addiction. As Leonardo Blair wrote in a Christian Post article, it was at that time he wrote what was probably his most explicitly religious song - "Station to Station," which is deeply rooted in the Stations of the Cross.

In a 2003 BeliefNet interview, when asked if his questions about reality had changed over the years, Bowie replied,


I honestly believe that my initial questions haven't changed at all. There are far fewer of them these days, but they're really important. Questioning my spiritual life has always been germane to what I was writing. Always. It's because I'm not quite an atheist and it worries me. There's that little bit that holds on: "Well, I'm almost an atheist. Give me a couple of months

In the same interview, when asked what his priorities were over the next few years, he talked about how over the previous 10 years his life had stabilized after his marriage to Somali-born model, Iman, and how at ease he was with being "a family-oriented guy," which he said he didn’t previously think was part of his makeup. "But," he quipped, "somebody said that as you get older you become the person you always should have been, and I feel that’s happening to me." He then added, "I’m actually like my dad!"

Even then, 13 or so years before his death, as a man in his mid-50s, with reference to God, Bowie sagely observed, "That's the shock: All clichés are true. The years really do speed by. Life really is as short as they tell you it is. And there really is a God--so do I buy that one? If all the other clichés are true... Hell, don't pose me that one." The interview ended on that note.

Here's a video for the song "Lazarus" off his Blackstar album:


Look up here, I'm in heaven
I've got scars that can't be seen
I've got drama, can't be stolen Everybody knows me now