Solemnity of the Blessed Virgin Mary, the Mother of God

A month or so ago I ordered a used copy of David Wilbourne's little book A Virgin's Diary. In the book, Wilbourne, who serves as a bishop for the Anglican Church in Wales, creates an imaginary diary for the Blessed Virgin Mary during her pregnancy with our Lord. As one might suspect the entries run the gamut from mundane, to funny, to whimsical, to quite insightful. It certainly is not a book everyone would like, but I am enjoying it immensely.

Appropriate to today's solemnity is something from an entry in which Mary, or Miriam as she is called in the diary, accompanies Zechariah to Jerusalem for his first service in the Temple since the birth of his son, John (the Baptist). In the early morning of the second day the young, pregnant virgin goes for a walk that takes her down through the Kidron valley and up the Mount of Olives. Once on the mount she is amazed by the glory of what she sees as she looks over the holy city. But her amazement "is quickly replaced by another feeling." As the change occurs she begins to shiver "with sheer terror, dread at what lies ahead." She begins to doubt her fiat: "What on earth am I doing, going along with all this? How can I, or my yet-to-be-born son, ever hope to make even the slightest impact . . .?" In Wilbourne's telling she is referring specifically to making an impact on the Jewish religious system rooted in Temple worship, which worship she participated in the previous day. In her despondency, she tells God "let's forget all about it."

In his imaginary account, Wilbourne writes that God "is surprisingly upbeat" in response to Miriam's near despair. "This is a fresh start," He tells the young woman. "Through you and our baby, I want people to know that I'm into everything, all the squalor, all the heartbreaks, all the pain, all the pregnancy sickness, that nothing in all creation is beyond my reach." God ends this disquisition by telling the despondent young woman, "That's incarnation girl! I want to abolish the sacred by shouting out that everything is sacred!"

I am tempted to end my post here, but I like where Wilbourne takes the dialogue. In reply, the young Miriam says, "A laudable ambition . . . As a sermon, that deserves a straight alpha. But doesn't it seem a funny way to go about it, kicking off the [God's]-Into-Everything-Show with a virgin birth. It does give the teeniest weeniest impression that you ain't into sex." God replies: "Oh no, I passionately believe that with delight and tenderness couples may know each other through love . . . But we had to go for a virginal conception so I could put my signature to the venture from the start. No more or no less than that. Don't worry Miriam, I won't let you down. We'll win through. Remember that I am with you." 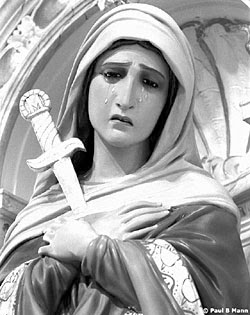 Reflecting on her encounter, Miriam notes that remembering God is with her, far from being a comfort at this point, causes her to "shake more with terror." As she makes her way back into the city she is overcome with weariness. She sits down and begins to weep. As she sits weeping a donkey nuzzles her and stays by her side. Miriam climbs onto the donkey's "cross-marked back" and rides back into Jerusalem.

As my friend, Fr Peter Nguyen, SJ, noted in a brief exchange we had concerning Reformed theology- theology without a Marian dimension leaves one cold. Specifically he wrote, "To tell/theologize the story of Christ is to also tell/theologize about his mother."

In light of Wilbourne's welcome reflection on Christ's mother, here's something most relevant by Edward Schillebeeckx, OP, from his classic book on sacramental theology, Christ the Sacrament of the Encounter with God: "The incarnation is not merely a Christmas event. To be man is a process of becoming man; Jesus' manhood grew throughout his earthly life [here I would invoke Luke 2:52], finding its completion in the supreme moment of the incarnation, his death, resurrection and exaltation. Only then is the incarnation fulfilled to the very end."

Remember, O Most Blessed Virgin Mary, that never was it known that anyone who fled to thy protection, implored thy help, or sought thine intercession was left unaided.