At least to my mind and ear "epiphany" is a wonder-filled word. According to any useful dictionary, our English word "epiphany" comes to us via the Middle English word epiphanie, derived from Anglo-French through the Latin epiphania. Before Latin, the word originated in the Greek epiphaneia, which simply refers to an appearance, or manifestation. We typically use the word to refer to the appearance or manifestation of something, or someone, that is not only significant in some way, but an appearance pregnant with meaning, a manifestation that goes deeper than what appears to our senses, having what I will call, for lack of a better term, spiritual resonance.

James Joyce made use of "epiphany" as a literary tool throughout his oeuvre. In his posthumously-published autobiographical work, Stephen Hero - which work was the basis of his A Portrait of the Artist as a Young Man - Joyce defined what he meant when he used "epiphany." Stephen Hero's epiphany about epiphanies happened one evening as he was strolling down a Dublin street ("Eccles' St," according to Joyce). As he walked he became aware of a young woman speaking to a young man on the steps "of one of those brown brick houses which seem the very incarnation of Irish paralysis." Stephen overhears the young woman telling the young man, no doubt in an effort to be demure, that she had just been at chapel. To this the young man responds with something inaudible to Stephen, but something to which the young woman "softly" replies, "0 ... but you're ... ve ... ry ... wick ... ed." Joyce conveys that "This trivialit*y made [Stephen] think of collecting many such moments together in a book of epiphanies."

By an epiphany [Stephen] meant 'a sudden spiritual manifestation, whether in the vulgarity of speech or of gesture or in a memorable phase of the mind itself. He believed that it was for the man of letters to record these epiphanies with extreme care, seeing that they themselves are the most delicate and evanescent of moments. He told Cranly that the clock of the Ballast Office was capable of an epiphany. Cranly questioned the inscrutable dial of the Ballast Office with his no less inscrutable countenance:

-Yes, said Stephen. I will pass it time after time, allude to it, refer to it, catch a glimpse of it. It is only an item in the catalogue of Dublin's street furniture. Then all at once I see it and I know at once what it is: epiphany.

-Imagine my glimpses at that clock as the gropings of a spiritual eye which seeks to adjust its vision to an exact focus. The moment the focus is reached the object is epiphanised. It is just in this epiphany that I find the third, the supreme quality of beauty [italicizing mine]

The third "supreme quality of beauty" to which Joyce's protagonist refers was articulated by Aquinas, no doubt explicating Aristotle. Stephen goes on to opine that cataloging epiphanies can only be done "with the aid of the lantern of tradition," that is, he must work from an aesthetic theory. With this he wades into a discourse on beauty according to the Angelic Doctor (i.e., Thomas Aquinas):

You know what Aquinas says: The three things requisite for beauty are, integrity, a wholeness, symmetry and radiance. Some day I will expand that sentence into a treatise. Consider the performance of your own mind when confronted with any object, hypothetically beautiful. Your mind to apprehend that object divides the entire universe into two parts, the object, and the void which is not the object. To apprehend it you must lift it away from everything else: and then you perceive that it is one integral thing, that is a thing. You recognise its integrity. Isn't that so? 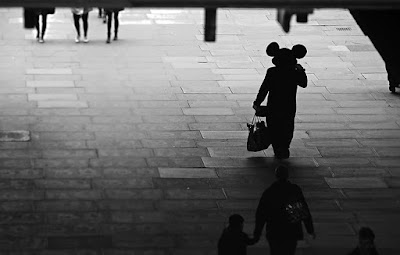 With this introduction Stephen proceeds to unpack for poor Cranly Aquinas' three qualities. While it doesn't seem that Cranly is very interested from get-go, this does not begin to become apparent to Stephen until his companion is distracted by the antics of a drunk man who has just been thrown out of a bar. It seems that while Stephen, in the wake of his awakening, is content to discourse about epiphanies, Cranly simply pays attention to what is going on around him, reminiscent of Stephen's walk down Eccles' St.

Having finished his argument Stephen walked on in silence. He felt Cranly's hostility and he accused himself of having cheapened the eternal images of beauty. For the first time, too, he felt slightly awkward in his friend's company and to restore a mood of flippant familiarity he glanced up at the clock of the Ballast Office and smiled:

-It has not epiphanised yet, he said

How often have you felt like Stephen after engaging in a discourse? You know, the kind you launch into, telling someone how to build a watch when she only asked you what time it was. I don't know about you, but I have to be careful not to cheapen "the eternal images of beauty." One way of reading this Joycean excerpt, the way I read it today, is by refusing to accept it as a case of Stephen casting pearls before swine and seeing it, instead, as an instance in which a swine dons pearls and sashays about like a great beauty.

So-called "apologetics" often cheapens images of eternal beauty. To live faith apologetically can render you blind to daily life, to what is unfolding right in front of you in all its beauty and complexity. Faith that is truly faith does not seek to apply pre-fabricated answers to life's pressing and persistent questions and quandaries. As Msgr Giussani often noted, what is needed is not a discourse, but a witness. To take our cue from Joyce: the mystery of God-made-man-for-us has to be epiphanised.
at January 02, 2016