At least where I live January is a dead time of year. I can't remember feeling any differently about the first month. When my Dad died five years ago in January this feeling intensified. Given the brilliantly shocking convergence of the release of his album Blackstar on 8 January, his birthday, and his death on 10 January, David Bowie’s passing intensified this all the more.

As I contemplated Lent last weekend, it occurred to me that this year, with Easter falling on 27 March, we will observe Good Friday on the Feast of the Annunciation: 25 March 2016- quite a convergence. With all of that out of the way, I apologize in advance for the disjointed nature of what follows.

In the wake of Bowie’s death, while listening to the first of his Berlin Trilogy albums last Friday, I decided to re-read Jacques Derrida’s The Gift of Death. In anticipation of this re-reading I read Derrida’s Guardian obituary, reading this led me to read Terry Eagelton’s response to some of the newspaper’s coverage of Derrida’s death (see: “Don’t deride Derrida”), which, in turn, led me to Eagleton’s 2006 review of Richard Dawkins’ The God Delusion, which appeared in the London Review of Books (see: “Lunging, Flailing, Mispunching”). That is the path that led me here. How's the for intertexuality?

Where is “here,” you might ask? “Here” is the place of hope as set forth by Eagleton in his review of Dawkins’ execrable book:

The Christian faith holds that those who are able to look on the crucifixion and live, to accept that the traumatic truth of human history is a tortured body, might just have a chance of new life – but only by virtue of an unimaginable transformation in our currently dire condition. This is known as the resurrection. Those who don’t see this dreadful image of a mutilated innocent as the truth of history are likely to be devotees of that bright-eyed superstition known as infinite human progress, for which Dawkins is a full-blooded apologist. Or they might be well-intentioned reformers or social democrats, which from a Christian standpoint simply isn’t radical enough

This seems wholly fitting from Eagleton, whose Page-Barbour Lectures were published just last year with the title Hope without Optimism. About these published lectures, Slavoj Žižek wrote: “In our predicament every direct optimism is by definition a fake--the only bearers of true hope are those who dare to confront the abyss we are approaching.” In a very real sense, aren't we all hurdling towards the abyss? Death is the horizon beyond which we cannot see. 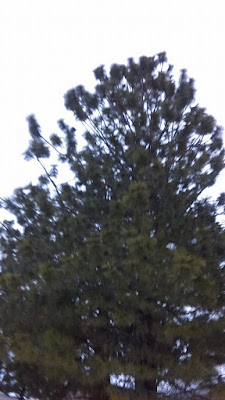 Green tree against grey sky- from my walk today

Eagleton rightly notes that the central doctrine of Christianity “is not that God is a bastard,” but is the incarnation of God’s only Son, who Eagleton correctly describes as “a joke of a Messiah . . . a carnivalesque parody of a leader who understood, or so it would appear, that any regime not founded on solidarity with frailty and failure is bound to collapse under its own hubris." Then, citing the English Dominican theologian, Herbert McCabe, Eagleton insists that the central message of Christianity is “if you don’t love you’re dead, and if you do, they’ll kill you.” It seems to me that very often we try to make it not only about something else, but about anything else.

As if any of this needed reinforcement, as I prayed Evening Prayer today the two psalms were one psalm, as they often are when the selected psalm is a bit longer: Psalm 49, which reminds us that death is the great equalizer, or, as Bowie sang on the title track of his last album, perhaps narrating a dramatic dialogue he imagined taking place upon his own death: You’re a flash in the pan . . . I’m the great I am.

All of this made the prayer that concluded Evening Prayer this evening truly a prayer, that is, a cri de coeur:

Father,
yours is the morning
and yours is the evening.
Let the Sun of Justice, Jesus Christ,
shine for ever in our hearts
and draw us to that light
where you live in radiant glory.
at January 19, 2016

Email ThisBlogThis!Share to TwitterShare to FacebookShare to Pinterest
Labels: Community of the Heart, Cultural, discipleship, I believe, Reflections and Ruminations