It is difficult to preach on the story of the woman caught in adultery without some comment on the text itself. Despite the fact that it now appears in all printed versions of the Bible, going from John 8:1-11, this narrative does not appear in the most ancient manuscripts of any of the canonical Gospels. In John’s Gospel, in addition to its settled location, it also appears, depending on the manuscript, in two other places. In some manuscripts it is found in what many scholars argue is its more natural place, in the Gospel of St. Luke. But, again, even in Luke it is found in two different places.

Let there be no doubt, the story of the woman caught in adultery has sufficient apostolic credentials to be included in Scripture. Eusebius, the early church historian, writes that Papias, an early second century bishop, told the story “of a woman who was accused of many sins before the Lord.” More insight is gleaned about the story by its appearance in a third century book, The Apostolic Constitutions, where it is used to warn bishops who are too strict. St. Augustine speculates that the story was omitted from the Gospel text "to avoid giving scandal." It seems the fear was that a story of such mercy towards an adulteress would cause the faithful to take the grave sin of adultery too lightly. So, in an ironic twist, the church becomes the judgmental crowd, judging even our Lord by finding him too forgiving. Of course, the whole point of this episode is precisely to demonstrate how deep and wide is God’s mercy, given us in Christ. We recognize how radical this is when we pray during our Stations of the Cross here at the Cathedral: "Bring to life everlasting all who have made the world a place of misery. Let the power of your love be stronger than human failure and let no one be without redemption."

It is easy to imagine Jesus on the Mount of Olives in deep, intimate prayer to his Father. As He concludes His prayer and comes down into the courtyards of the Temple and begins to teach He is put to the test by the religious authorities, who seek to impale him on the horns of a vicious dilemma. In the Judaism of Jesus’ time, when a legal question arose, it was taken to a rabbi. So, it is as a rabbi that Jesus is approached with the case of this woman who is caught in flagrante delicto. Beyond the particulars of the case, or the trickery of the scribes and Pharisees, Jesus sees a person in distress, a scared and shamed woman, a person stripped of her dignity and seemingly at the mercy of the merciless. He is moved. It no longer matters to Him what she has done, despite the fact that there seems to be no question about her guilt, though one wonders, since she was caught in the act, where her partner is. This scene is a concrete illustration of what St. Paul is trying to describe in our second reading when he writes about "not having any righteousness of [his] own based on the law," but only "that which comes through faith in Christ" (Phil. 3:9). In other words, St. Paul tells us that self-righteousness is an oxymoron.

In His response to this distressed and about-to-be-killed woman, Jesus, through his words and actions, reveals that He is at once true God and true man. In a truly human act of solidarity He not only takes pity on this woman, but, to a degree, takes on her guilt and shame. Among the ancient explanations given as to why or possibly what he wrote in the dirt, one that stands out is that He was seized with an intolerable sense of shame. As a result, he could not make eye contact with the crowd nor with the woman’s accusers and least of all with the accused herself. "In his burning embarrassment and [initial] confusion he stooped down so as to hide his face and began writing . . . on the ground" (Barclay, Gospel of John, vol. 2, pg. 3). Perhaps the leering, lustful looks on the faces of the accusers and the bleak cruelty in their eyes combined with the prurient curiosity of the crowd, not to mention the shame of the woman, all "combined to twist the very heart of Jesus in agony and pity, so that he hid his eyes" (ibid). Another ancient explanation is that Jesus wrote the names of her accusers who were themselves guilty of adultery, which may indicate that she was a prostitute. 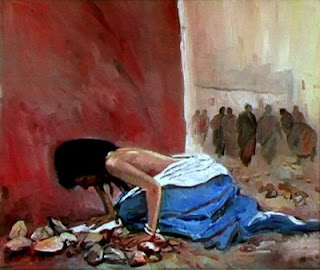 After this awkward pause, Jesus’ divinity begins to show forth, not by cleverness, but by His love for her, shown by His compassion. Without impugning the law, he challenges the scribes and Pharisees and beats them at their own game: "Let him who is without sin among you be the first to throw a stone at her" (John 8:7). After speaking these words, he bends down and resumes writing in the dirt. As He does this the crowd disperses, the accusers drop their stones and slowly walk away, no doubt murmuring to each other, then, much to the woman’s surprise, Jesus, though himself without sin refuses to condemn her. His refusal to condemn her does not mean that He condones her sin. He admonishes her to "go, and do not sin again" (John 8:11).

By forgiving so freely, Jesus transcends the demand of justice, in this case death, and seeks to turn a sinner into a righteous person by giving her new life, thus fulfilling the words of the prophet Isaiah: "see, I am doing something new!" (Isa. 43:19). Jesus Christ is God's justice, who often challenges our all too human notions of what it means to be just. As with so many episodes in the Gospels, this story remains unfinished. It remains unfinished because we do not know if the woman only took the reprieve Jesus obtained for her from stoning, or if her whole life was changed, turned around. Of more importance to us than speculating about her is our own unfinished story.

There is a connection between today’s Gospel last week's. The thread that links the two is the call to conversion, which is the passage from death to new life. The attitude of the men condemning the woman is much the same as the attitude of the older brother in last week’s Gospel. In neither case do those who consider themselves righteous want to show mercy. Jesus shows us that righteousness, to a very large extent, consists of nothing other than being merciful. Indeed, as we sang for today’s responsorial, "[t]he Lord has done great things for us." We show the joy with which we are filled by allowing ourselves to be changed from self-righteous, judgmental people looking for opportunities to throw stones, into compassionate and forgiving people; women and men who speak and act like Jesus. Only in this way do we, like Christ, show that the power of God's love is stronger than human failure.