Living a Christian life, a life of integrity

"While comfort and consolation are legitimate things to experience at and from liturgy there is also - and, I would argue, more compellingly - the challenge that all liturgy offers us; nothing less than communal conversion and communal self-transcendence. This means that the Eucharist challenges us to change our minds, hearts, and - yes - our ways and wills to conform to what God has already revealed and has in store for us. Liturgy is not a refuge from the world so much as it is an intense moment in time that refocuses our lives and reminds us that what we celebrate in liturgy should be borne out in the way live our lives" (Msgr. Kevin W. Irwin Models of the Eucharist pg. 92). 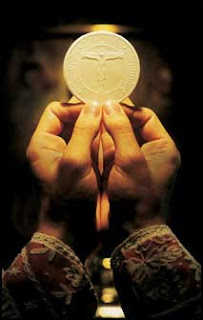 Asserting that what we do in liturgy should be bear fruit in our lives is a call to integrity, that is, integration. As Christians we have integrity only insofar as what we do in liturgy shapes how we live. Along these lines, Archbishop Charles Chaput of Denver delivered a great speech the other night at Houston Baptist University (the link takes you to His Excellency's complete speech on YouTube). In it he discussed the disastrous nature of the speech John F. Kennedy gave in Houston to a group of Protestant ministers during the 1960 presidential campaign. In his Houston speech, which Mitt Romney's College Station speech was supposed to be some kind of LDS analog, Kennedy basically said that if he were elected his Catholic faith would have no bearing whatsoever on how he governed. In essence Kennedy's message that night in Houston some fifty years ago was "I solemnly swear on a stack of Constitutions that if elected my most deeply held and cherished beliefs will have absolutely no impact on how I govern." This is not living one's faith with integrity. One could multiply examples moving forward. Probably the next most famous example would be Mario Cuomo's 1984 Notre Dame speech when he set forth his "personally opposed but I can't impose my faith on other people" defense of his stance in favor of an unlimited abortion license, as if the defense of innocent human life were a uniquely Catholic concern.

Living with integrity is difficult at times. As Dietrich Bonhoeffer observed a long time ago, Christian discipleship has a cost. Sometimes it costs us nothing less than it cost the Lord, as with Bonhoeffer, it may cost you your life! For most of us, the cost is not that high, it may mean accepting defeat, disappointment, rejection, being seen as being "a bit off," as the British say. Then again, Jesus asks, "what does it profit a man to gain the whole world and forfeit his soul? For what can a man give in return for his soul? For whoever is ashamed of me and of my words in this adulterous and sinful generation, of him will the Son of Man also be ashamed when he comes in the glory of his Father with the holy angels" (Mark 8:36-38). The Greece/Goldman shenanigans offer us a concrete glimpse of what it means to lack integrity, which almost rises to the level blasphemy, given Blankfein's claim that they are doing God's work.

The Eucharist is what gives us strength "to live this way." As Archbishop Javier Martínez of Granada, Spain stated in a speech he delivered several years ago, Beyond Secular Reason, part of which I include in my blog header: "The Eucharist is the only place of resistance to the annihilation of the human subject. And the Eucharist is also the place where one can learn and experience a universality, which is not the abstract and false universality of modernity, which is not in opposition to local realization, identity and fullness."

This Lent make an effort to go to Mass more in order to let the Lord challenge you, to let Him conform your lowly body with his glorified body, so that you may live a life that accords with your destiny, the reason you exist, a life of integrity, the only path to true happiness.