My friends, tonight is the holiest night of the year. The Easter Vigil is the Mother of all Masses. It is the most important liturgy we celebrate. The Easter Vigil is the Church’s celebration of the one, true Passover: Jesus Christ, who passed over from death to life. Christ’s resurrection from the dead is the central event in the history of the world.

Apart from creation, through which, by God’s gracious decree, everything that is was brought into being, Christ’s resurrection from the dead, which ensures that God did not create in vain, is the most important event ever to occur. Each of us should be awestruck as we join in this celebration, which hallows this night.

On this holy night, we do not merely celebrate an event that happened more than 2,000 years ago. Christ’s resurrection is an on-going event. It will continue until he returns in glory and everyone is raised from the dead. During his mortal ministry, Jesus said:

Even more than this, tonight we will witness the paschal death, burial, and rising to new life of Magnin, Dahliana, Tiffany, and Brennan. This is exactly what St Paul was referring to in our reading from his Letter to the Romans when he asked: “Are you unaware that we who were baptized into Christ Jesus were baptized into his death?” (Rom 6:3) His question was rhetorical: “We were indeed buried with him through baptism into death” (Rom 6:4). Because we died and were buried with him in the waters of baptism, “just as Christ was raised from the dead by the glory of the Father, we too might live in newness of life” (Ibid). 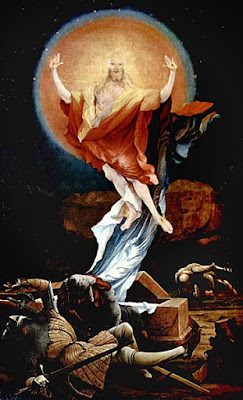 Christ's Resurrection, by Matthias Grunewald, Isenheim altar piece, 1512-1516
St Paul’s point is that eternal life is not the life that begins after mortal death. Eternal life begins when you are baptized. Once baptized, you are to live a new life, a life washed clean from sin and no longer subject to death and the fear that death incites. Baptism is the fundamental sacrament of the Christian life. All vocations are rooted in baptism. In the end, there is only one vocation, one call, the call to holiness, the call to follow Christ. The rest of it is just figuring out how Christ calls you to follow him. This why St Paul exhorted the Christians in ancient Rome to think of themselves “as being dead to sin and living for God in Christ Jesus” (Rom 6:11).

The renewal of our baptismal promises on this holy night, something for which Lent is supposed to be our preparation, is very important. Through our renewal, we recommit our lives to Christ, who suffered, died, and rose for us. By his dying and rising, the Lord showed us that love is not only as strong as death but strong enough to conquer death, which is our enemy and God’s enemy.

Our redemption by means of Christ’s passion, death, and resurrection is not God’s Plan B; Plan A having failed because of the fall. The mystery of our redemption is captured well in this line from the Exsultet, which was sung at the beginning of our liturgy:

O truly necessary sin of Adam, destroyed completely by the Death of Christ/
O happy fault that earned so great, so glorious a redeemer (Roman Missal, The Easter Vigil in the Holy Night, sec. 19)

In our Gospel tonight, which is taken from St Mark, Mary Magdalene, Mary the mother of James, and Salome, making their way to Jesus’s tomb on the morning after the Sabbath, wonder, “Who will roll back the stone for us?” (Mark 16:3) When they arrived, they immediately noticed that the stone was already rolled away. Christ is resurrected because God is love. It was the power of God, which is the power of love, that rolled away the stone from the tomb’s entrance. Indeed, because God loves you, God rolls the stone away from your heart, enabling you to believe. We call this great act of divine love faith.

Seeing the stone rolled away, the women could not help but enter the tomb. Upon entering, they encountered “a young man sitting on the right side, clothed in a white robe” (Mark 16:5). Seeing him “they were utterly amazed” (Ibid). Imagine how much more amazed they were by what he told them: “You seek Jesus of Nazareth, the crucified. He has been raised; here is not here” (Mark 16:6) This was Good News, not only for these faithful women but for everyone throughout the ages! The young man then told them something very important, something our participation in this great Vigil tells us, which is our natural tendency when we receive good news, let alone the Good News: “But go,” he said, “and tell his disciples and Peter…” that he is risen from the dead and that he will meet them in their native Galilee (Mark 16:7).

The women were sent to be witness to Christ’s resurrection. The word “apostle” means one who is sent. This is why Mary Magdalene, who in all four Gospels is among the first to witness Jesus’s resurrection and, as a result of being a witness, is sent to tell Peter and the others Christo anesti, Christ is risen! This is why she is revered as apostola apostulorum: apostle to the apostles. In his commentary on John’s Gospel, St Thomas Aquinas asserted that Mary Magdalene was given three great privileges:

First, she had the privilege of being a prophet because she was worthy enough to see the angels, for a prophet is an intermediary between angels and the people. Secondly, she had the dignity or rank of an angel insofar as she looked upon Christ, on whom the angels desire to look. Thirdly, she had the office of an apostle; indeed, she was an apostle to the apostles insofar as it was her task to announce our Lord's resurrection to the disciples (Super Ioannem, 2519)

My dear sisters and brothers, tonight you will witness death, burial, and resurrection in and through Christ. What you witness is no less real for being sacramental, which means it is a way of perceiving reality via signs and symbols. Signs and symbols reveal reality to us in-depth, offering us a glimpse of reality according to all the factors that constitute it. It is important to be clear: If Christ was not raised from the dead, then what we do tonight means nothing at all.

At the end of this celebration, like Mary Magdalene, who is the patroness of our diocese, you will be sent to bear witness to Christ’s resurrection by living the new life the Father has given you in Christ, which life was sealed and strengthened by their Holy Spirit when you were anointed with Sacred Chrism in Confirmation. Your witness to Christ’s resurrection is what makes the Church not only one, holy, and catholic but is what makes the Church apostolic, that is a community of missionary disciples sent to bear witness to Divine Mercy.
at March 31, 2018