In the seemingly hectic swirl that ensued upon the Lord learning of the death of his friend Lazarus, at which news “Jesus wept” (John 11:35), he told Martha, Lazarus' sister, the most fundamental truth of the Christian faith: “I am the resurrection and the life; whoever believes in me, even if he dies, will live, and everyone who lives and believes in me will never die” (John 11:25-26a). He follows this revelation by asking her, “Do you believe this?” Magnin, Brennan, Dahliana, and Tiffany, this is the question Jesus asks you today.

Beliefs are strange things. We all have well-founded beliefs and we all have unfounded beliefs. Belief does not preclude doubt. In fact, dealing with doubts is indispensable for clarifying what we believe and what we ultimately cannot accept as true. There is probably no greater uncertainty we face than contemplating resurrection and life eternal in wake of the death of someone dear to us, or even when we engage in momento mori- remembering our own death. Sure, living forever sounds great, but is it true? Can it be possible, or is it merely a desperate wish? Woody Allen expressed this deepest of human longings well when he said, “I don't want to achieve immortality through my work. I want to achieve it through not dying.”

“Do you believe this?” This is the same question posed in our first reading from Ezekiel, the immediate context for which is Israel's return from exile. But how anyone and everyone comes to know that God is LORD is through Jesus Christ by the power of the Holy Spirit. God's Lordship is made manifest by Christ's victory over death, which is the power that opens graves and has us rise from them (Ezk 37:13), not merely metaphorically, but really and truly. It is easy, as Christians, to become so numbed to this reality, this truth, that we lose sight of its audaciousness.

In our second reading from St Paul's magisterial Letter to the Romans, all of this is fleshed out for us more fully:

Magnin, Brennan, Dahliana, and Tiffany you are preparing for Baptism, Confirmation, and the Eucharist. These are the means Christ has instituted (and the reason he established his Church) to impart to you, or, turning to a term now popular in cooking, “infuse” into you, his Holy Spirit, who is also the Spirit of the Father. In other words, the Holy Spirit is the way Jesus remains present, not just to you, but in you and through you. 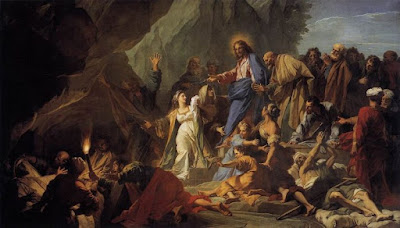 The Raising of Lazarus, by Jean-Baptiste Jouvenet, 1706

Being infused with the Holy Spirit means being filled with new life, which is life eternal. Eternal life is not that life that begins after mortal death. Rather, eternal life begins when we die, are buried, and rise in Christ to new life through Baptism. A few chapters earlier in Romans during a rather complicated exposition on sin and grace, the apostle asked,

are you unaware that we who were baptized into Christ Jesus were baptized into his death? We were indeed buried with him through baptism into death, so that, just as Christ was raised from the dead by the glory of the Father, we too might live in newness of life" (Rom 6:2-3)

Don't drive the Spirit out by continuing to live according to the flesh, which does not mean a rejection of the body but a rejection of sin: living according to the Spirit is something we are called to do now and, as the result of Christ's resurrection, forever with our bodies. This determination to cooperate with God's grace, which builds on our nature, is sung about by Old Crow Medicine Show in their song “Darius Rucker,” which is about a deep longing for home:

Oh, north country winters keep a-getting me down
Lost my money playing poker so I had to leave town
But I ain't turning back to living that old life no more

How a wish turns into hope, an unfounded belief into a well-founded one is through experience. Experience is how an event becomes an encounter. What does this mean? Pope Benedict, towards the beginning of his first encyclical letter Deus caritas est, with his characteristic clarity, did about as good a job describing this with words as anyone: “Being Christian is not the result of an ethical choice or a lofty idea, but the encounter with an event, a person, which gives life a new horizon and a decisive direction” (sec. 1). The “person” whom we encounter and who changes us is none other than Jesus Christ.

My dear Elect, today, in preparation for your re-birth in Baptism, Jesus directs you to “Take away the stone” from your hearts so that he can raise you to new life. So, arise and turn your face towards home.
at March 18, 2018