A prophet, a king, two anointings, the LORD as a shepherd, light, darkness, awakening, Jesus, a blind man, a washing, a healing, a warning of judgment- our readings for the Second Scrutiny of our Elect contain enough material to write a good-sized book! Maybe it will be an international best-seller. We can call it "the Bible," which means "the Book."

Looking at Samuel's response to the LORD's prompting to head to Bethlehem to the house of Jesse in order to find and anoint Israel's new king, which was necessitated by Saul's, the current king, disobedience, we see that it was only after Samuel considered six of Jesse's seven sons that he found God's anointed in the seventh, that is, the least among them- even though, biblically-speaking, seven is the number of completeness or divine perfection.

The episode we hear about in our first reading dramatically highlights the fact that God often (as in almost-always) chooses the least likely person to accomplish his purposes in and for the world. Of course, Jesus himself, the only begotten Son of the Father, is the ultimate proof of this divine tendency. Why does God work this way? In my view, it's so that there is no doubt that it is God who is at work reconciling the world to himself and not something done by human effort.

In order to see that God chooses the least likely of people to accomplish his purposes, you don't have to take my word for it, nor even that of Sacred Scripture, just look around, not only at the Elect, but look at the rest of the assembly, the ekklesia, that is, the Church, and not just in the pews, but up here on the chancel too. I believe that what St Paul wrote about to the ancient Church in Corinth still applies today:

consider your own calling... Not many of you were wise by human standards, not many were powerful, not many were of noble birth. Rather, God chose the foolish of the world to shame the wise, and God chose the weak of the world to shame the strong, and God chose the lowly and despised of the world, those who count for nothing, to reduce to nothing those who are something, so that no human being might boast before God. It is due to him that you are in Christ Jesus, who became for us wisdom from God, as well as righteousness, sanctification, and redemption (1 Cor 1:26-30)

In short, the people of God is and remains the original motley crew. 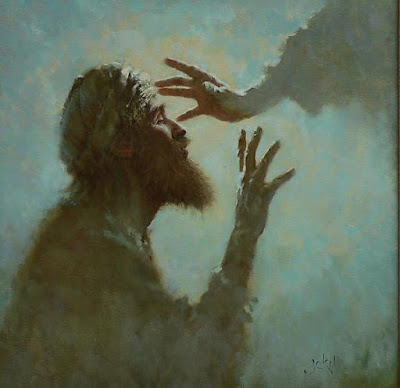 Tiffany, Dahliana, Magnin, and Brennan, each of you has been called by the Lord from darkness to live in the glory of his magnificent light, which illumines you from within and is the very power of the Holy Spirit, who is the way our risen Lord remains present, not just to us, but in us until the consummation of all things at his glorious return, for which you need to stand ready by being ever watchful. Heed the apostle's exhortation: "Awake, O sleeper, and arise from the dead, and Christ will give you light" (Eph 5:14).

In his book, Jesus: A Pilgrimage, Fr Jim Martin noted, "original sin is the one verifiable Christian dogma" (100). Accordingly, in a very real sense, we're all born blind. Like the man Jesus heals by restoring his sight, without doing all the required theological parsing, there is a scriptural sense in which our blindness is not necessarily the result of either our sin or that of our parents. St Paul, in his magnum opus, The Letter to the Romans, noted that

creation was made subject to futility, not of its own accord but because of the one who subjected it, in hope that creation itself would be set free from slavery to corruption and share in the glorious freedom of the children of God (Rom 8:20-21)

This is wonderfully and gloriously sung about at the beginning of the upcoming Paschal Vigil in that great and ancient hymn, the Exsultet:

In English:
O happy fault,
that earned for us so great, so glorious a Redeemer!

My dear Elect, Christ has chosen you, which election was confirmed by Bishop Oscar at the Rite of Election we just a few weeks ago. Like the blind man in today's Gospel, you are chosen so "that the works of God might be made visible through [you]" (John 9:3). You've done nothing to earn your election. Our lovely God is nothing if not gracious and gratuitous. Your chosen-ness, like David's, like mine, is a mystery. But we are chosen to bear witness to others about what Jesus has for us and to invite them to meet the Savior that they, too, might see more clearly.

Again, like the blind man in today's Gospel, who immediately began to pay a price for being chosen (another of those great mysteries- that of the Cross), you will be washed in Baptism, anointed in Confirmation, and further drawn into the very life of God, who is Father, Son, and Holy Spirit, when you receive Christ in communion for the first time. Then you can truly say, "I was blind and now I see" (John 9:25).
at March 11, 2018