For Christians, Holy Saturday is the strangest day of the year. It is the day we commemorate Jesus's body lying the tomb while he descended into hell. His descent into hell, which was the subject of a very intense theological debate several years ago, is part of our redemption. It can and, at least in my view, should be taken as part of the Lord's passion. The intense debate over the phrase in the Apostles Creed, "he descended into hell," was prompted by a young theologian's critique of the Holy Saturday theology of Hans Urs Von Balthasar.

Balthasar, along with Henri De Lubac, Marc Chenu, Yves Congar, and others, was one of the theologians responsible for what came to be known, prior to the Second Vatican Council, as la nouvelle théologie (French for "the new theology"). The overarching effort that united these very different theologians was their desire to go beyond, or even overturn, that very stale non-theology, the so-called neo-Thomism, which was the order of the day. All of them paid a price for their attempts. The primary thrust of their theology was what came to be called, again in French, ressourcement, or a "return to the sources" of Christian faith. Their work prompted a patristic revival that is still on-going. In fact, Balthasar, with his anthology of the writings of Origen, entitled in the original German Origenes Geist und Feuer (the English translation is Origen: Spirit and Fire), was single-handedly responsible for retrieving Origen into Western Christian theology. Thirty years after his death, he remains highly influential and will remain so for a very long time. 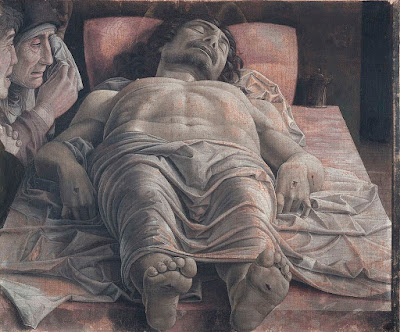 The Lamentation Over the Dead Christ, by Andrea Mantegna, 1480


In his book Mysterium Paschale: The Mystery of Easter, Balthasar devoted a chapter, entitled "Going to the Dead: Holy Saturday," to this weirdest of all days of the liturgical year. He began the chapter by noting the lacuna in the Church's Tradition concerning Holy Saturday:

The more eloquently the Gospels describe the passion of the living Jesus, his death and burial, the more striking is their entirely understandable silence when it comes to the time in-between his placing in the grave and the event of the Resurrection (Mysterirum Paschale [San Francisco: Ignatius Press, 2000], 148)

Balthasar points to Nicholas of Cusa as one who understood Holy Saturday in terms of the, or "a', passion, seeing it "as forming part of the vicarious Passion properly so called" (170).

Balthasar, rightly, in my view, sees Holy Saturday as the origin of both Purgatory and Hell. I do not wish to delve into complex and contentious matters in-depth in this post. I only want to note that this day on which the Church celebrates no baptisms, confirmations, Masses, weddings, or ordinations (except in cases of someone who is in imminent danger of death receiving the sacraments of Christian initiation) is usually the forgotten and overlooked day of the Triduum, despite being of vital importance for our salvation.

"Triduum" means "three days." By our participation in the Mass of the Lord's Supper on Holy Thursday and the liturgy of Good Friday, we are able grasp, or at least grapple with, these mysterious aspects of our redemption. But Holy Saturday is easily forgotten and so not grappled with. This is where the Lirurgy of the Hours can play a vital role. We are to pray the offices on Holy Saturday. By by so doing we can ponder more deeply the mysteries revealed to us on this Saturday we call "Holy."
at March 31, 2018