I am not giving up alcohol for Lent

At least for me, the most obnoxious question as Lent approaches is, "What are you giving up for Lent?" Even for Roman Catholics who care about and seek to adhere to the discipline of the Church it is not necessary forego anything at all for the whole of Lent. In fact, maybe what someone might need is to take something up, rather than give something up. According to the discipline of the Church, what is required for the observance of Lent is to fast on Ash Wednesday and Good Friday and abstain from so-called "flesh meat" (i.e., eating the meat of warm-blooded animals) on Fridays in Lent. It is customary to give up something you enjoy, not because it is bad necessarily, as an act of penance. Predictably, in the late modern, or post-modern, U.S. Lent has become a form of therapy or yet another opportunity to live your best life now. As a result, people seek to lose weight, get in shape, quit smoking, quit drinking, etc., during this holy season. But doing those things is not really the point of Lent.

For a number years, last year included, I gave up alcohol for Lent. I am not giving up drinking this year. The reason for this is because last July I gave up drinking alcohol, apart from wine at Communion, completely and for good. In truth, I discerned way back in 2000 that I should quit drinking. Nonetheless, I persisted for 15 more years with some fairly successful, even quite extended, periods of abstinence. Last year I also seriously curtailed drinking coffee, giving it up completely for five months and only re-introducing it around Christmas time. These days, I don't drink coffee first thing in the morning, or even everyday. On most days when I drink coffee, I have a cup of de-caf. Maybe once or twice a week, usually in the afternoon, I enjoy a single cup of coffee. At this point, even enjoying a second cup would be no big deal. Both choices, prayerfully-discerned, have been for the best.

My relationship to coffee and caffeine, however, is very different from my relationship to alcohol. It's difficult for me to describe my relationship with drink, which is why I was so struck by John Waters' description of his own experience with drinking and then quitting drinking. In his book Lapsed Agnostic, in a chapter entitled "The Unquenchable Thirst," Waters wrote, "Just as the world of Harry Potter breaks down into wizards and Muggles, so it seems to me that the real world breaks down into those who by consent describe themselves as 'alcoholics' and people who can take a couple of drinks and leave it." Waters goes on to point out that the term "alcoholic" is misunderstood by most people most of the time. So misunderstood, in fact, that Waters, like myself, "would never publicly use the word to describe myself." Why? Because to most people, "an alcoholic is someone lying in the gutter clutching a bottle of wine wrapped in a newspaper." The adjective "alcoholic," Waters continues, in the minds of most people, equates to someone who has "thrown away everything he ever had because of his craving for this liquid poison." Here's where his writing began to hit home with me - "It was never like that for me." Indeed, it was never like that for me either. 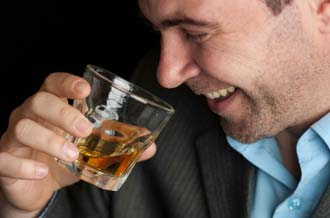 I did not really make a bold announcement that I stopped drinking, at least not before now. As circumstances have given me occasion, I've let people with whom I socialize know. It's amazing how much adult socializing revolves around drinking. Most people are surprised that I've quit because they never perceived I had a problem because I never even came close to fitting the description of an alcoholic given above. While my reasons for drinking and occasions on which I would drink differ from his, like Waters,

My problem with alcohol related to the extent I was incapable of functioning without it. How much or how often I drank didn't matter. In fact, I could give up drink for weeks, or even months on end, but it took me many years to perceive these breaks, far from signalling an absence of dependency, were themselves entirely focused on the occasion of the next drink, projected weeks or months into the future - my birthday, St. Patrick's Day, the beginning of summer

It's a weird psychology that comes into play, but one with which I am all too familiar. I can remember years when all through Lent a big part of my focus was drinking the bottle of Beaujolais I usually had with my Easter lamb and my return to imbibing. So, I won't be giving up alcohol this Lent, or any Lent hereafter. And that is a good thing. As to the rest, what I am doing or not doing for Lent is between myself the Lord.
at February 08, 2016