Forty days of Lent, 40 years in the wilderness, 40 days in the desert. Add to these the wanderings of father Abraham, to which Moses refers in our reading from Deuteronomy. In all these we can see how integrated is the holy season of Lent into salvation history.

It always bears noting when considering Jesus' three temptations that he truly had free will. If he did not, then his whole life was nothing more than a divine puppet show. Not believing he had free will easily leads to a form of docetism. Docetism, from the Greek verb meaning "to seem," is a heresy that understands Jesus as only seeming to be fully human. While there is much more that can and probably should be stated theologically concerning this, noting that he had free will in this context simply allows us to grasp that the three temptations were really tempting to him.

The second temptation Jesus rejected during his 40 days of fasting in the wilderness was the temptation to worldly power. I am in no position to say which, if any, of the three temptations was the most difficult for our Lord to resist. But I do know the temptation to worldly power is one the Church has a had a hard time resisting throughout her history. This temptation seems especially strong today given the waning influence the Church exercises in temporal affairs in Western countries, including the United States.

Whether on an international, national, local, or personal level it often seems easier to seek to impose the Gospel rather than live it fully and joyfully. This temptation, which is easy to see here in the United States during this presidential election year, makes Christians vulnerable to the siren songs of those who promise to restore "Christian values" to a nation they insist is badly in need of such a restoration. While it's not only possible, but necessary, to legislate morality, at least to some extent (are you going to foster a society that rejects the injunction not to murder, steal, lie and cheat?), what the Church can and ought to seek is the freedom to live our faith fully, which certainly includes the freedom to speak freely and prophetically on matters pertaining to our freedom as well as to the common good. But if our speaking is to be even credible, let alone prophetic, we must be faithful to the truth. If nothing else, this is exactly why the unjust HHS mandate has been an occasion for the Church to repent. 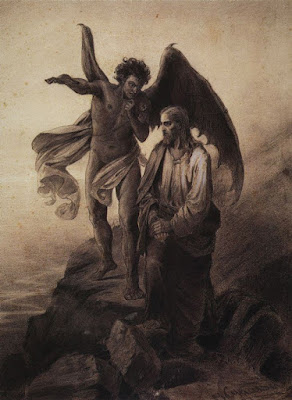 In my view, one of the best arguments against "religion" is that it is simply a means of social control. Such a view, one that arises from reality, in light of the reign of God as taught by Jesus, simply must be rejected. Why? Because the reign of God that Jesus came to usher in is not radical insofar as it does not return us to the roots of any known system of human governance, let alone put itself at the disposal of worldly rulers in order to consolidate power. In many very important ways, the reign of God subverts all known forms of human governance! Hence, Christians, to some degree, are failing if we're not seen as a danger to the state, or at least as a threat to the status quo. There's a reason "no prophet is accepted in his own native place" (Luke 4:24).

Bl. Oscar Romero, in a homily delivered in 1977, preached about the revolutionary nature of Christianity:

Another name for the "violence of love" is non-violence. As the witness of Archbishop Romero and many others demonstrates, non-violence is not passive. A person practicing non-violence confronts and resists evil courageously and with love. In light of the persistent temptation to worldly power, it seems impossible to emphasize too much that Jesus, throughout his life and ministry, eschewed worldly power. The basis for this comes right at the beginning of his ministry with his rejection of it in the desert.

Like the Israelites of old, who, when presenting their gift to the priest, in light of Jesus' time in he desert and his subsequent itinerant earthly ministry, which ended when the powers, recognizing the threat God's reign posed to them, crucified him, Christians, too, proclaim "My father was a wandering Aramean" (Deut 26:5). As the author of the Letter to the Hebrews wrote to those Jewish Christians of old who were struggling because the opprobrium in which they were held because of their faith in Christ: "Therefore, Jesus also suffered outside the gate, to consecrate the people by his own blood. Let us then go to him outside the camp, bearing the reproach that he bore. For here we have no lasting city, but we seek the one that is to come" (Heb 13:12-14). Far from making what happens in the here and now irrelevant, understanding reality according to everything that constitutes it makes it matter all the more.

In his Letter to the Colossians, St. Paul insisted that by his Cross, Christ despoiled "the principalities and the powers," making "a public spectacle of them" and "leading them away in triumph by it" (Col 2:15). This is the vindication Christians seek, which, as Paul elsewhere observed, "is foolishness to those who are perishing, but to us who are being saved it is the power of God" (1 Cor 1:18). In our second reading for this First Sunday of Lent, we hear what St. Paul wrote to the Church in Rome, a Church that if it had not already experienced fierce persecution, would experience it soon enough: "For one believes with the heart and so is justified, and one confesses with the mouth and so is saved. For the Scripture says, No one who believes in him will be put to shame" (Rom 10:9-10).
at February 13, 2016