This week, the final Sunday before Lent begins, each of our three readings tells us about a calling issued and accepted. As Catholics we tend to use the word "vocation" instead of calling, but these words are synonymous, that is, they effectively mean the same thing. To my mind, one of the most important messages conveyed to us through hearing about the divine callings of Isaiah, Paul, and Peter is that our calling is in no way tied to our worthiness. The Lord will make a way for you to fulfill what he calls you to do if you have the courage to accept his call.

In our first reading Isaiah declared: "Woe is me, I am doomed! For I am a man of unclean lips, living among a people of unclean lips; yet my eyes have seen the King, the LORD of hosts!" (Isa 6:5). In our second reading, taken from St. Paul's First Letter to the Corinthians, Paul pointed out to the Corinthian Christians - "For I am the least of the apostles, not fit to be called an apostle, because I persecuted the church of God" (1 Cor 15:9). Finally, in our Gospel, St. Peter, the fisherman who, I think, somewhat skeptically and begrudgingly took fishing directions from a carpenter - who told him to set out in daylight and cast his nets into the water, after a night spent catching nothing (fishing was done at night)- after bringing in what sounds like an unprecedented haul, fell on his knees before Jesus and pleaded with him, "Depart from me, Lord, for I am a sinful man" (Luke 5:8).

To Isaiah, the man of unclean lips living amongst a people of unclean lips, God sent a seraph. A seraph is an angel who belongs to highest order of the nine-fold celestial hierarchy of angels. Seraphim, which is the plural of seraph, are associated with light, ardor, and purity. According to our reading, this seraph flew to Isaiah holding a burning ember "which he had taken with tongs from the altar. He touched my mouth with it. 'See,' he said, 'now that this has touched your lips, your wickedness is removed, your sin purged.'" After this, Isaiah "heard the voice of the Lord saying, 'Whom shall I send? Who will go for us?' 'Here I am,' I said; 'send me!'" (Isa 6:6-8).

Paul, after stating why he was not worthy to be an apostle, goes on to write, sounding perhaps a bit like Popeye the sailor man, "But by the grace of God I am what I am" (1 Cor 15:10a). What was Paul? He was an apostle, a first-hand witness to the resurrection of Jesus Christ from the dead, more importantly he was one who was sent to proclaim the evangel, the good news. This is why Paul wrote, "his grace to me has not been ineffective" (1 Cor 15:10a).

Our Lord's words to Peter after the fisherman's confession of unworthiness echo through the ages until the end-of-time: "Do not be afraid; from now on you will be catching men" (Luke 5:10). With these words, Peter, too, is sent. It's important to ask what it was that Peter was not to fear. It doesn't strike me as very likely he feared fishing by the light of day, which was probably safer than fishing at night. I think what Peter was not to fear was his own unworthiness, his own limitations, his own lack of gifts and abilities, which were made all to obvious to him in light of Jesus' glory. 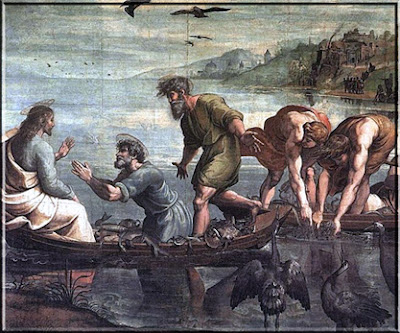 I remember years ago going on and on about my unworthiness to be a deacon with our then-Director of Diaconal Formation, who is a theologian and distinguished seminary professor. After listening to me for awhile, he said something like, "You're not worthy. Get over it. Nobody is." Those were helpful words, the very words I needed to hear and words I need to remind myself of from time -to-time, given my sometimes rigorist leanings.

Our readings this week reminded me of the first in-depth interview Pope Francis gave after being chosen to walk in the shoes of the Galilean fisherman. It was conducted by the Holy Father's fellow Jesuit, Fr. Anthony Spadaro and published in America magazine under the title "A Big Heart Open to God." The first question Fr. Spadaro posed to the Pontiff was, "Who is Jorgé Mario Bergoglio?" Pope Francis replied, "I do not know what might be the most fitting description.... I am a sinner. This is the most accurate definition. It is not a figure of speech, a literary genre. I am a sinner." I think this gives us a deep insight into why mercy is the centerpiece of Francis' papal ministry.

In baptism the Lord called you by name to serve him and sent you to usher in God's reign. Your call was confirmed in confirmation and is renewed each time you are sent forth from Mass. Lent is about preparing to celebrate the baptism of our Elect at the great Pascal Vigil and about renewing your own baptismal promises. The Sacrament of Penance is an extension of the Sacrament of Baptism. By receiving the mercy offered by the Father, through the Son, effected by the Spirit's power made available to us in this sacrament, you acknowledge your own unworthiness and place your trust in Christ, who bids you not to be afraid. Confession is where you learn firsthand that "perfect love drives out fear" (1 John 4:18). It is also where you learn what was made known to Isaiah, Paul, and Peter, namely, "We love because he first loved us" (1 John 4:19). Going to confession is an indispensable way to prepare for what happens at Easter.

The renewal of your vows at Easter can easily become an empty gesture, an exercise in mere ritualism, if there is no conversion of heart during Lent. Simply put, the renewal of baptismal promises should be more than words you speak. It should be you fearlessly saying yes to Christ once again. Stated succinctly, by virtue of your baptism, in which you died, were buried, and rose with Christ, you are called to selflessly serve others. During his Extraordinary Jubilee of Mercy let make every effort to put into practice the Corporal and Spiritual Works of Mercy. By engaging in these out of love, not fear, or an oppressive sense of obligation, you will live out our baptismal calling.
at February 07, 2016