"The whirlwind is in the thorn tree"

Eighty-four years ago today, in an Arkansas town called Kingsland, Johnny Cash was born. What is little mentioned these days, nearly 13 years after his passing, is the Man in Black's deep faith in Jesus Christ, about which he pulled few punches. In his 2003 book, The Man Comes Around: The Spiritual Journey of Johnny Cash, author Dave Urbanski wrote about the time Cash was being grilled by a reporter about being a Christian, specifically what kind of Christian he was. Finally, Cash told him, "I — as a believer that Jesus of Nazareth, a Jew, the Christ of the Greeks, was the Anointed One of God (born of the seed of David, upon faith as Abraham has faith, and it was accounted to him for righteousness) — am grafted onto the true vine, and am one of the heirs of God's covenant with Israel." Puzzled, the reporter responded with, "What?" Clarifying, Cash answered with, "'I'm a Christian. . . Don't put me in another box.'" 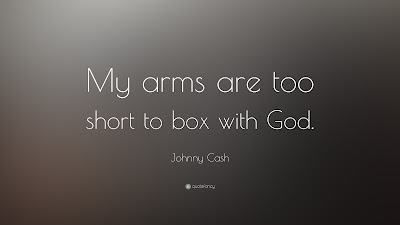 Speaking of his faith in a 2000 Rolling Stone interview, Johnny was typically sincere and self-deprecating. When it came to his faith in Christ, he impressively employed defeasible reasoning: "I believe what I say, but that don't necessarily make me right." Speaking more about his faith in Christ, he said, "There's nothing hypocritical about it. There is a spiritual side to me that goes real deep, but I confess right up front that I'm the biggest sinner of them all." I was blessed to grow up listening to and loving the music of Johnny Cash. I even have vague memories of watching The Johnny Cash Show when I was 5 or 6.

Having tipped my hand on Ash Wednesday when I posted about receiving a smear of ashes on one's forehead, I don't mind explicitly admitting that I am something of a crypto-Lutheran, especially when it comes to sin and being what Luther called simul iustus et peccator (i.e., simultaneously justified and sinner). To me that describes the simple reality of being a Christian, which is why I don't mind stating publicly that I can't grasp for life of me how Donald Trump can continue to claim to be a Christian after publicly stating that he has never asked God to forgive his sins. Since that is not a political observation, let me add that I sincerely pray that one day he washes his robes in the blood of the Lamb.

It seems appropriate that the Man in Black singing "The Man Comes Around" is our Friday traditio. It's perfect to listen to right after the Stations of the Cross:

Email ThisBlogThis!Share to TwitterShare to FacebookShare to Pinterest
Labels: Community of the Heart, Cultural, discipleship, Reflections and Ruminations