The Epiphany of the Lord

An epiphany is not merely a revelation. The term revelation is too generic to describe an epiphany. Neither is an epiphany simply a "manifestation" of something significant, a moment of insight. Then what is it? At least on Christian terms, an epiphany is a manifestation of God. As Christians, we need to distinguish epiphany from theophany. In a theophany it is clear that God is making himself manifest.

Looking forward to next Sunday's Feast of the Baptism of the Lord, which will bring this Christmas season to an end for Roman Catholics in the United States, we have an example of a theophany. Turning to St Matthew's account of Jesus's Baptism by John the Baptist in the Jordan River, the theophany occurs as Jesus

came up from the water and behold, the heavens were opened [for him], and he saw the Spirit of God descending like a dove [and] coming upon him. And a voice came from the heavens, saying, 'This is my beloved Son, with whom I am well pleased'" (Matt 3:16-17)

By way of contrast, an example of an epiphany, apart from the one had by he magi in their encounter with the child Jesus, is found in St Mark's account of Jesus's crucifixion. The Roman centurion standing guard at the place of execution "seeing how [Jesus] breathed his last" declared: "Truly this man was the Son of God" (Mark 1:39). Using Mark as a source, Matthew's account also conveys this episode but does so with the gloss typical of the inspired author of that Gospel when incorporating Markan material into his narrative (see Matt 27:54). Rather than Jesus's manner of death (arguably) being the source of the centurion's epiphany, as in Mark, for Matthew, it is the earthquake and all the other things that prompt their recognition of the executed Jew as the Son of God. But even in Matthew's account, there is a contrast between epiphany and theophany.

Judging from the centurion's epiphany at the Cross and the epiphany the unspecified number of magi had in the house at Bethlehem, we can define epiphany from a Christian perspective more precisely: an epiphany is a manifestation of God through ordinary circumstances. In other words, to have an epiphany you must have eyes to see and ears to hear. The founder of the Society of Jesus (i.e., the Jesuits), St Ignatius of Loyola, who founded the order in 1540, instructed his earliest confrères to "find God in all things."

Christianity that is worthy of the designation, far from loathing creation, creatures, and human beings, holds it as axiomatic that God is always present and active in the world. Hence, an epiphany is possible at any moment, even in what we might see as the least likely of people and/or circumstances. Provocatively, because every single person bears the imago Dei, the image of God, you can find God in everyone you meet. I know, this sounds foolishly naïve, especially when someone considers all the crappy things people do to each other and the propensity of some people (i.e., me at times) to do really terrible things. To assert that everyone bears the image of God and to even more boldly assert that it is possible to see the divine image in everyone is not to say for one minute that it is intuitively obvious, that is, easy. 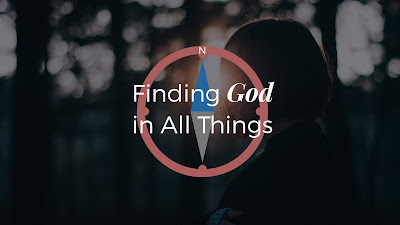 Not only is it often not intuitively obvious, but to the casual observer or the Christian who operates solely on the basis of certain preconceptions, ones that are usually derived from a reductive, and so destructive, theology conveyed by misguided preaching and catechesis, the contrary is often the case. To pass along some idea as to how this might "work," I turn to a quote that is usually attributed to G.K. Chesterton. But so far as anyone can tell, Chesterton neither wrote nor said anything like: "the young man who rings the bell at the brothel is unconsciously looking for God." The actual author of this line is Scottish novelist Bruce Marshall. The lines appeared in his 1945 novel The World, the Flesh, and Father Smith. For the fairly scintillating context of this quote, which Marshall puts in the mouth of his main character, see "FactChecker: C.S. Lewis and G.K. Chesterton Quotes". Returning to my point, sometimes you have to look really hard to see God manifested in another. Furthermore, how God's image is made manifest in another just might be in a counter-intuitive or paradoxical way. It is most likely due to the fact that Marshall's line is paradoxical that it is often attributed to Chesterton, whose many, many paradoxical sayings, frankly, tire me.

What enabled the magi to see God in the baby at Bethlehem is that they were looking, they were seeking, they were open, not operating under debilitating preconceptions of what they might find. It is salutary to note that Epiphany is when the Gentiles come to worship the God of Israel. I suppose you could say the preconceptions had by many in Israel about the coming of the Messiah is precisely what prevented them from recognizing Jesus of Nazareth as God's Anointed, the successor of King David, whose kingdom is everlasting.

A bit further on in St Matthew's Gospel, after the start of his ministry, during the Sermon on the Mount, Jesus teaches exactly what the magi heeded:

Sounds like a very good New Year's resolution to me. How about you?
at January 05, 2019