On the anniversary of my ordination

It just occurred to me that I was ordained 15 years ago today. In light of this realization and my borderline neurotic dedication to anything and everything I I undertake, my first thought after remembering today's anniversary was "I should've composed a meaningful blog post." In my effort to live more peacefully with myself, I then thought, "Nah. What matters isn't the anniversary or even 15 years of past service. What matters is what lies ahead." Jesus always summons us forward.

My classmates and I received the Sacrament of Orders from the late George Hugh Niederauer, who then served as Bishop of the Diocese of Salt Lake City. He went on to serve as Archbishop of San Francisco, the metropolitan province to which my diocese belongs. We were ordained in The Cathedral of the Madeleine, where I had the privilege of serving for the first 11+ years of my diaconate. Archbishop Niederauer died 2 May 2017. I only mention the date of his death because he shared a birthday with our youngest daughter, 14 June and died on the birthday of our oldest son, with whom he would visit and entertain when he was little and I served at the Cathedral. He was a delightful person.

It was then- Bishop Niederauer's original desire to ordain us the anniversary of his episcopal ordination- 25 January- the Feast of the Conversion of St. Paul. In 2004 that day fell on a Sunday. So we were ordained on Saturday, 24 January 2004- the Memorial of St Francis de Sales. 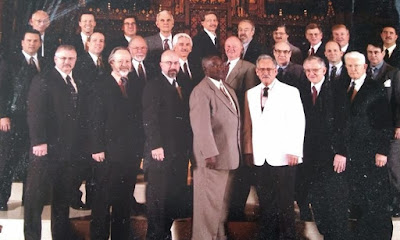 
Circling back to living at peace with myself brings to mind a popular quote attributed to St. Francis de Sales, the evangelistic Roman Catholic bishop of post-Reformation Geneva: "Have patience with all things, but chiefly have patience with yourself." This is important because the grace of diaconal ordination largely consists of the strength to make yourself a gift to others so that they can experience his love directly. In this way, the deacon imitates Jesus, who is the model deacon. Making myself present to others in persona Christi servi (in the person of Christ the servant) means helping them see that Christ comes among us "as the one who serves" (Luke 22:27).

I remember after the ordination Mass going with my family and Father Patrick Elliott, a friend who passed away last November, to Buca di Beppo. My wife reserved "the Pope room." A few years later, as a gift for presiding at the wedding of one of the co-owners of this restaurant, I received a ceramic bust of Pope John Paul II from this room.

I was ordained with 24 other men. One of those with whom I was ordained was living here but moving to Tennessee shortly after ordination. Five of my classmates have died. It feels right to remember them by name in this post. They are named in the chronological order of their deaths: Gerald Shea, Aniceto Armendariz, C. Scott Chisholm, Willie Folks, Ricardo Arias. Four members of the Diocese of Salt Lake City diaconal ordination class of 2004 are no longer in active ministry due to age and health-related issues. Another one or two minister as they are able due to physical limitations.

As deacon classes in the United States go, my class featured both older members (i.e., a few guys approaching 70) and younger members (i.e., five or six guys under 45- I was youngest- 38 years-old at ordination).

To all my classmates who are alive and to those still serving, Ad multos annos!
at January 24, 2019