Solemnity of Mary, the Mother of God

Since 1966, New Year's Day has also been observed as the World Day of Peace. I would be hard-pressed to think of better foci for the first day of the New Year. It is customary for the Pope to issue a message for the World Day of Peace. This year was no exception, click here to read this year's message. Among other things, in his message this year, Pope Francis addressed politics:


2. The challenge of good politics

Peace is like the hope which the poet Charles Péguy celebrated.[ Cf. Le Porche du mystère de la deuxième vertu, Paris, 1986.] It is like a delicate flower struggling to blossom on the stony ground of violence. We know that the thirst for power at any price leads to abuses and injustice. Politics is an essential means of building human community and institutions, but when political life is not seen as a form of service to society as a whole, it can become a means of oppression, marginalization and even destruction.

Jesus tells us that, “if anyone would be first, he must be last of all and servant of all” (Mk 9:35). In the words of Pope Paul VI, “to take politics seriously at its different levels – local, regional, national and worldwide – is to affirm the duty of each individual to acknowledge the reality and value of the freedom offered him to work at one and the same time for the good of the city, the nation and all mankind” (Apostolic Letter Octogesima Adveniens (14 May 1971), 46)

Political office and political responsibility thus constantly challenge those called to the service of their country to make every effort to protect those who live there and to create the conditions for a worthy and just future. If exercised with basic respect for the life, freedom and dignity of persons, political life can indeed become an outstanding form of charity

Instead of focusing on Mary as Mother God, I want to focus on one implication of her being Theotokos, which implication was recognized by Pope Paul VI in his speech ending the Third Session of the Second Vatican Ecumenical Council. In this speech, which he delivered to the Council on 21 November 1964, the then-Pontiff declared: "For the glory of the Virgin and our consolation, we proclaim Mary the Most Holy Mother of the Church, that is, the Mother of the whole People of God, both the faithful and the pastors." To flesh this out a bit, I turn to an Anglican theologian, the late John Macquarrie. Macquarrie's work played an important part in shaping and forming me as a Christian for the past quarter century. What follows comes from his one volume systematic theology: Principles of Christian Theology (2nd Edition. Charles Scribner's Sons: New York, 1977, 398-399):


It will be noted that I have said nothing about the supposed relation between reverence for the Blessed Virgin Mary and the need for a feminine element in religion. It may well be true, as a matter of historical fact, that the veneration of the Virgin is related to ancient Near Eastern and Mediterranean worship of the Mother Goddess, just as many other features of Christian worship have pagan precursors. It may also be true that reverence for the Virgin satisfies a psychological need, missed by a too masculine conception of God; and that such reverence encourages a kind of piety that is warmer and more personal than the austere and not very attractive virtues of the Puritans. But these considerations have no direct bearing on the theological question about Mary, and can be used neither to support nor to detract from the place traditionally given to her in the Church. Berdyaev is completely correct when he affirms that reverence for the Blessed Virgin "is essentially distinct from pagan worship of the feminine principle"34 The practical benefits or, as has sometimes happened, abuses, which reverence for Mary has brought, cannot be determinative of her place in Christian thought and devotion. This has to be considered in theological terms, that is to say, in the light of christology, ecclesiology, and the transformed anthropology that goes with them, as we have tried to show. If we have consistently held throughout this book that theological thinking must be rooted in the existential dimension of faith, we have maintained equally that practical attitudes have to be correlated with theological reflection and, where necessary, corrected by it. It seems to me, however, that it is precisely a renewed theological consideration of the issues involved that will increasingly lead Protestants (as it has led some of them already) to abandon their negative attitudes toward Mary, and to join with the Catholic brethren (and with the New Testament) in a glad Ave Maria! 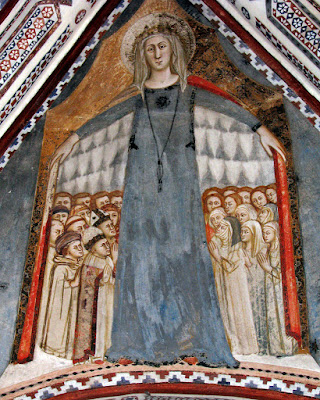 Fresco in Sacro Speco in Subiaco, from scenes in the life of the Blessed Virgin Mary


This lengthy paragraph ends a section of Macquarrie's work that considers Pope Paul VI's declaration that the Blessed Virgin Mary is Mater Ecclesiae or Mother of the Church. In the section, he also considers the other major Marian dogmas, but given the newness of Pope Paul's designation when Macquarrie first wrote his book (1966), Mary's relationship to the Church constitutes the majority of this section on the Blessed Mother.

Because Mary is Mater Ecclesiae, far from being an obstacle to ecumenism and ultimately to Christian unity, she is instrumental to achieving it, just as she is instrumental to realizing peace in the world. If it is true that peace on earth begins with me, with realizing peace in my own soul, then I recommit myself to making recourse to the Blessed Virgin Mary daily by praying her Most Holy Rosary, the Angelus, and her Memoraré daily. I urge you, dear reader, to do the same.

Happy New Year! Holy Mary, Mother of the Church, through your intercession, unite all those who in believe in your Son. By the unification of all the baptized, pray that the world becomes more peaceful.