"It could happen to you so think for yourself"

Tempest fugit! Another week has flown by. A work colleague who is in her early 30s this week mentioned to me how much more quickly time is seeming to pass for her these days. Trying to not to play too much the wizened person full of cornball wisdom, I simply said, "It only seems to go faster moving forward." Especially in the summertime, I can remember when I was in school and time seemed to move slowly, the days and weeks dragging on. In accordance with the practical application of Einstein's theory of relativity, time moves slower when you're bored and rapidly when you are not. Time seems to move at its most rapid when you're having a good time. But as the second hand on my analog watch reminds me, time is just a function of change and moves steadily and at the rate. Certainly over the course of my half-century plus on this planet, the pace of change has increased rapidly. Sometimes it seems to move at ludicrous speed. Forgive me for the dated reference but I watched Spaceballs last weekend with my three youngest children. Anyway, it is Friday once again.

St. Paul wrote something relevant to this:

Do you not know that the runners in the stadium all run in the race, but only one wins the prize? Run so as to win. Every athlete exercises discipline in every way. They do it to win a perishable crown, but we an imperishable one. Thus I do not run aimlessly; I do not fight as if I were shadowboxing. No, I drive my body and train it, for fear that, after having preached to others, I myself should be disqualified (1 Cor 9:24-27)

Egkrateueta is the transliterated form of the Greek word the Apostle uses and is translated into English as "discipline." Egkrateueta literally means "self-restraint."

Looking at Humanae vitae it is easy for me to see how, as a universal pastor, Paul VI wrote in the awareness of the unruliness of sexual desire, especially as this unruliness was beginning to become more openly manifest in the late 1960s. As a result he wrote:

The right and lawful ordering of birth demands, first of all, that spouses fully recognize and value the true blessings of family life and that they acquire complete mastery over themselves and their emotions. For if with the aid of reason and of free will they are to control their natural drives, there can be no doubt at all of the need for self-denial. Only then will the expression of love, essential to married life, conform to right order. This is especially clear in the practice of periodic continence. Self-discipline of this kind is a shining witness to the chastity of husband and wife and, far from being a hindrance to their love of one another, transforms it by giving it a more truly human character (sec. 21) 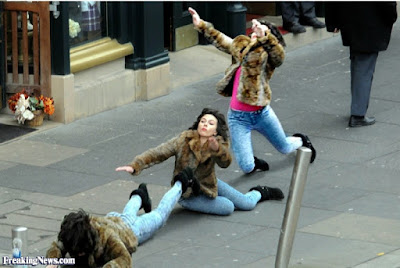 Without emotional maturity it is impossible to attain spiritual maturity. Emotional maturity cannot be attained without self-discipline. Bl. Pope Paul VI was also quick to note how our collective lack of self-control could threaten our humanity by causing us to surrender to technological control or, worse yet, state control over one of the most human of all activities: conceiving children. Because he was not stupid, naïve, or ridiculously idealistic, he realized that stumbling and falling would occur even for couples committed to following Church teaching. This is why he wrote to them:

If, however, sin still exercises its hold over them, they are not to lose heart. Rather must they, humble and persevering, have recourse to the mercy of God, abundantly bestowed in the Sacrament of Penance. In this way, for sure, they will be able to reach that perfection of married life which the Apostle sets out in these words: "Husbands, love your wives, as Christ loved the Church. . . Even so husbands should love their wives as their own bodies. He who loves his wife loves himself. For no man ever hates his own flesh, but nourishes and cherishes it, as Christ does the Church. . . This is a great mystery, and I mean in reference to Christ and the Church; however, let each one of you love his wife as himself, and let the wife see that she respects her husband" [Eph 5:25.28.32-33]" (sec. 25)

Given the subject today, I think Billy Idol's underappreciated song "Catch My Fall," off his incredibly good 1983 album Rebel Yell, is a good selection for our Friday traditio: