Due to the brevity of St. Mark’s Gospel, beginning this, the Seventeenth Sunday in Ordinary Time in Year B of our three-year Sunday Lectionary cycle, the Liturgy of Word is augmented on five consecutive Sundays by St. John’s Gospel. Specifically, our Gospel readings for these Sundays are taken from the sixth chapter of John. This chapter is called “the Bread of the Life Discourse.” Without a doubt, in the Bread of Life Discourse we have the most in-depth exposition in all of Sacred Scripture on the Eucharist.

Especially during this long stretch of Ordinary Time, when we read from the Gospels in a semi-continuous manner, it is important to follow the thread of Jesus’s story from one week to the next. If you remember way back to three weeks ago, Jesus is rejected after teaching in the synagogue of his hometown: Nazareth. Two weeks ago, after being rejected in his hometown, Jesus sent those who, in Mark’s Gospel, are identified for the first time as “the Twelve,” on a mission (Mark 6:8-9).

The mission of the Twelve, who seemed rather unprepared to venture forth, was to preach repentance, cast out demons, and heal the sick. He sent them in pairs and instructed them to take nothing with them but the clothes on their backs, the sandals on their feet, and a walking stick. He even forbade them from taking a “second tunic,” which to us would be like saying, “don’t take a jacket” (Mark 6:9). He instructed them thus so that they were to forced to rely only on God and on one another.

In our reading last week from Mark, the Twelve, who are identified for the first time as “apostles,” which means ones who are sent, reported back to Jesus their remarkable success. After hearing their report, the Lord invites them to get away from the crowds who were placing such great demands on them that they did not even have time to eat. He wanted them to cross the Sea of Galilee with him for some rest. As they shoved off, it became known to the crowds where Jesus and the Twelve were going. The crowd beat feet, as it were, arriving at the spot before Jesus and the apostles (see Mark 6:30-34).

Proving the truth of the saying “There is no rest for the wicked and the righteous don’t any,” approaching the shore and seeing that the crowd was like a flock of sheep without a shepherd, Jesus was moved with compassion Mark (6:34). Putting his plans to rest on hold, the Lord “began to teach them many things” (Ibid.). So eager were the crowds to be where Jesus was very few of them thought to bring anything to eat. Because they were apparently there for a long time, listening to the many things Jesus taught, they were hungry and due for a meal. Even were we to stick with Mark’s Gospel, the next episode is Jesus’s feeding of the five thousand (see Mark 6:35-44). But this is where we switch to St. John’s extended discourse. It is easy to see, therefore, that the insertion of these five passages from John into the Lectionary during Year B is done organically.

In its Dogmatic Constitution on Divine Revelation, Dei verbum, the Second Vatican Council, noted: “God, the inspirer and author of both Testaments, wisely arranged that the New Testament be hidden in the Old and the Old be made manifest in the New” (sec. 16). Hence, in the Lectionary, especially during the weeks in Ordinary Time, great effort was made to harmonize the Old Testament reading with the Gospel. It is easy to see how our first reading this week, taken from 2 Kings, involving the prophet Elisha’s miraculous feeding of the one hundred, harmonizes with and points forward not only to Jesus’s feeding of the multitude, but to his institution of the Eucharist. 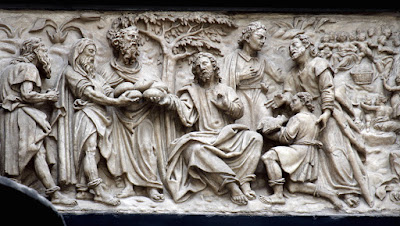 Before the miracle, “Jesus took the loaves” and “gave thanks” (John 6:11). In Koine Greek, the language in which the New Testament was written, the word the Gospel of John puts in the mouth of Jesus is eucharistesas, a verb meaning “giving thanks.” In this and every Eucharist, we gather to give thanks to the Father through his Son for creating and redeeming us. Out of gratitude, we don’t merely offer bread wine along with whatever we put in the collection basket, we offer ourselves to the Father through Christ. Our gifts of bread and wine as well as our offering are symbolic of us offering ourselves entirely to the Father through Christ in the Holy Spirit.

Mass is where we truly encounter the risen Lord. Christ is not only made present in the consecrated bread and wine, but in the gathering of the baptized, in the person of the priest, and in the proclamation of the Scriptures. Like the crowds who were eager to be where Jesus was, we should look forward each week to gathering together on Sunday to listen to the Lord’s teaching and be nourished by his body and strengthened with his blood. At end of each Mass, like the Twelve, we are sent forth on a mission to herald the kingdom of God. The kingdom of God we are sent to proclaim, as we see dramatically in today’s Gospel by Jesus’s slipping away rather than being acclaimed king, “does not belong to this world” (John 18:36).

In our reading from Ephesians we learn what it means to live God’s kingdom as a present reality, “to live in a manner worthy of the call [we] have received” (Eph 4:1). This means living “with all humility and gentleness” as well as having great patience with each other (Eph 4:2). Applied to our parish life, this means “bearing with one another through love, striving to preserve the unity of the spirit through the bond of peace" (Eph 4:2-3). I am sure I am not the only one puzzled by the fact that Church life is sometimes so brutal. Let's not forget that each parish is supposed to be an outpost of God's kingdom in the world. The fact that it sometimes isn't bears eloquent witness to our brokenness and our need for the healing Christ seeks to give in the Eucharist and the Sacrament of Penance.

If we’re not committed to bearing with one another in patience out of love, to encouraging one another, to serving each other as well as the wider community, then what’s the point of gathering for the Eucharist? Like those Jesus sent out together, we are companions on our mission. The root of the word “companion” is the Latin word for bread: panis. “Companion” was originally coined to describe someone with whom you share a meal. Our participation together in this Eucharist makes us companions.

The Eucharist is the way the Lord remains present among us, in us, and through us until he returns in glory. The only way to know the reality of what we sang about in our responsorial – “The hand of the Lord feeds us; he answers all our needs” – is through the experience of participating in Mass each Sunday. Conversely, the only possible empirical evidence that the bread and wine we offer are transformed by the Spirit into Christ's body and blood is the transformed lives of those who partake of it.
at July 29, 2018