McCarrick no longer a Cardinal

At 88 years old, McCarrick was a superannuated member of the Sacred College. Superannuation occurs when a Cardinal turns 80. A superannuated Cardinal, while remaining a member of the College, does not serve on Vatican commissions or in Vatican Congregations. Cardinals over 80 are not eligible to participate in a conclave to select a new pope when the Holy See becomes vacant due to the death or resignation of the Roman Pontiff. Nonetheless, McCarrick's resignation is fitting in light of what is already known about his gross misbehavior, namely the settlements paid out by the Diocese of Metuchen and the Archdiocese of Newark. There can be little doubt that, should McCarrick survive the canonical process (he's 88 and in poor health), further penalties will follow, perhaps even laicization.

Writing for the National Catholic Reporter (see "Conservatives distort McCarrick scandal to attack Francis"), Michael Sean Winters points out how McCarrick's sickening case is being used by those often dubbed "conservatives" to spread blame and, predictably, attack Pope Francis, someone they simply cannot stand. It is not lost on Winters, nor should it be on anyone else, that many of these same "conservatives" could not abide the Dallas Charter, which, as Winters notes, agreeing with one of those he highlights who is spreading blame, should've had canonical provisions to deal with misbehavior by bishops, but did not. I remember how outraged many self-styled traditionalists were by the Dallas charter with its call for mandatory reporting and the involvement of law enforcement.

The blame-spreading extends to Cardinal Seàn O'Malley, the Capuchin friar who serves as archbishop of Boston (see "Catholic Bishops Beg for a Clear Policy against Evil"). Lest it be forgotten in our memory-impeded age, O'Malley was sent to Boston in the wake of the horrific situation there made infamous by the stellar work of reporters of the Boston Globe, whose important work was popularized by the movie Spotlight, in the wake of that diocese's well-known malfeasance and misfeasance in dealing with clerical sexual abuse. He was chosen because he handled a similar situations while serving as bishop of the Dioceses of Fall River, Massachusetts and Palm Beach very well. It's fair to say no prelate in the U.S. and perhaps no prelate in the entire world has spent more time with victims of clerical sexual abuse than Cardinal O'Malley.

It was O'Malley's track record that prompted Pope Francis to select him as head of the Pontifical Commission for the Protection of Minors. While heading that Commission, which rightly numbers abuse survivors among its members, O'Malley has humbly accepted the pointed criticism of the Commission by members, some of whom have publicly resigned. Hanging in there instead of quitting, he's sought to make the necessary changes. In addition to this responsibility and that of being a member of Francis's C9, he's a very present bishop. Was it not O'Malley who helped the Holy Father see he was being duped not just about the Barros situation in Chile but about something more widespread in that country? (see this AP report) It was O'Malley's intervention that led Francis to send Archbishop Scicluna to Chile to carry out a thorough investigation. After receiving Scicluna's extensive report, the Holy Father summoned all of the bishops of Chile to Rome. At the end of this three-day gathering, all the Chilean bishops submitted their resignations to Pope Francis (see "All of Chile’s Catholic Bishops Offer to Quit Over Sex Abuse Scandal") In the end, he accepted three of these, including that of Barros, whose complicity in the abuse of another priest, was the spark that lit the fire (see "Pope accepts Chilean bishops' resignation over abuse scandal"). 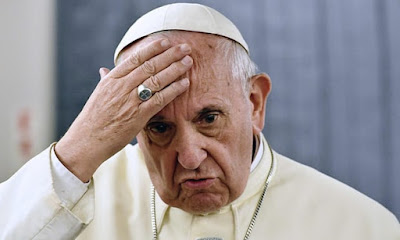 Yet, in the National Review screed, O'Malley is castigated for being just another ecclesial bureaucrat for noting that there does, in fact, need to be canonical provisions for dealing with bishops who are wolves in shepherd's clothing. He is accused of being lawyerly by stating a letter from a prominent theologian to the Pontifical Commission he heads was received but he had not read it. Of course, it does bear asking why the Diocese of Metuchen and the Archdiocese of Newark did not make a bigger deal when they paid settlements to victims of McCarrick's despicable and self-indulgent behavior, instead of binding the victims to secrecy and carrying on with business as usual, allowing a predator like Ted McCarrick to continue his illustrious career. At the end of the day, it's the reflexive covering up that really angers most people. But there is no reason to blame the current bishop of Metuchen or the current archbishops of Newark, neither of whom immediately succeeded McCarrick, or Cardinal Wuerl, McCarrick's successor in D.C., for these things. Cardinal Tobin and Bishop Checcio (archbishop of Newark and bishop of Metuchen respectively) have acquitted themselves well by opening records of actions taken prior to their tenures and not only releasing the victims from their legal gag orders but encouraging them speak out and offering them their support as they do.

Catholics should take no relief from let any joy in what the #MeToo movement is helping to unearth in the secular realm or in other eccelesial communions, like the Southern Baptist Convention, which has been grappling with its own massive failures as of late concerning sexual abuse and its systematic cover-up.

I guess what I am trying to communicate is that the McCarrick affair is gut-wrenching for everyone who loves Christ's Bride. No sooner do we think we have turned a corner on sexual abuse than we're grabbed by the shoulders and yanked back onto to Shit Street. Yes, it grows tiresome and, worse yet, produces worry and doubt. This is why making it about anything else is so wrong. Using the trauma of victims of sexual abuse to advance one's ideological agenda renders the victims yet another injustice. If we want to look at clerical, specifically priestly and episcopal, sexual abuse through the lens of conservative/liberal we will quickly see that this not a discriminator. Priests and bishops who've horrifically abused those for whom they should've caring, thus degrading their office and sullying the Church, can be found across the conservative-liberal spectrum.

In Christ we have Someone greater than all our sins. He loves His often unfaithful Bride, whom Tradition has dubbed Casta meretrix (i.e., the chaste whore). As for us, whether we be lay person or cleric, we need to let our own light burn brightly in the assurance that what the Lord said is true:

No one who lights a lamp conceals it with a vessel or sets it under a bed; rather, he places it on a lampstand so that those who enter may see the light. For there is nothing hidden that will not become visible, and nothing secret that will not be known and come to light. Take care, then, how you hear. To anyone who has, more will be given, and from the one who has not, even what he seems to have will be taken away (Luke 8:16-18- italicizing and emboldening emphasis mine)

When the massive failure in Los Angeles was revealed (see "Addressing the pastoral failure in L.A."), I wrote about a previous resignation of a Cardinal: "Turning in the red hat; resigning as a Cardinal."