God's love for us is tireless

No doubt you've heard the saying, "There's no rest for the wicked and the righteous don't need any." Well, it's no exaggeration to state that this is not a bad summary of the message the readings for this Sixteenth Sunday in Ordinary Time seek to convey.

I could be wrong and I am too lazy to verify this hunch, but it seems to me that no matter which cycle of Sunday readings we're in (A, B, or C) during the middle-to-late part of summer we are confronted with some very challenging Scripture readings. During these long weeks in Ordinary Time, when our readings from the Hebrew Bible are largely taken from the Nevi'im, that is the prophets, which are harmonized with our Gospel reading, we can arrive at some very deep and practical insights about what it means to be followers of Jesus. This is why, in addition to attending Mass, we should spend time each week preparing for the Sunday liturgy by reading, pondering, and praying with the Lectionary readings.

The prophet Jeremiah, in our first reading, castigates the political and religious leaders of ancient Judah for scattering the flock by their lack of care and concern for them. He even accuses these leaders of misleading God's chosen people. The scattering to which the prophet refers is the destruction of Jerusalem and the the consequent exile of Judah in Babylonian, neither of which have yet occurred. But this scattering does not constitute the divine punishment, it is but the natural consequence of the misfeasance of Israel's appointed shepherds.

While from a Benjaminite village, Jeremiah was a priest (i.e., a kohen), that is, a Levite who served in the Temple. As such, he could've contented himself with being a member of the priestly caste and living a fairly comfortable life. But God called him to warn Judah and to call them back to fidelity to the covenant. This, of course, made him a trouble-maker as well as caused him to be a somewhat troubled person.

A few chapters earlier than the chapter from which our first reading is taken, Jeremiah complains about the wearying and excruciating nature of his prophetic calling. Reflecting on how his divine calling to proclaim "violence and outrage" has led to him being the object of reproach and derision, Jeremiah tells of his refusal to speak on God's behalf but of his determination to never again mention the LORD's name. In this passage, the prophet accuses God of seducing him. But no sooner does Jeremiah make this resolution than the word of the LORD begins to burn like a fire in his heart, which fire is "imprisoned" in his bones. His bones cannot contain the fire of God's word and so he "grows weary" of resisting and can no longer refrain from prophesying (see Jeremiah 20:7-9).

In addition to predicting that God would preserve a faithful remnant through the exile, Jeremiah prophesied of a time when the LORD would raise up "a righteous branch for David;" a king who "shall reign and govern wisely," doing "what is right and just in the land" (Jer 23:6). The name of this Good Shepherd is "The LORD our justice" (Jer 23:6).

Our Gospel today picks up precisely where last Sunday's Gospel left off. Last Sunday we heard about Jesus sending the Twelve off on a mission to preach the reign of God, calling people to repentance, casting out demons and healing the sick. At the end of the reading, the Twelve, despite their seeming lack of qualification for their mission, report back to the Lord, seemingly with astonishment, that by doing just as they had been instructed their mission had been successful (see Mark 6:7-13). 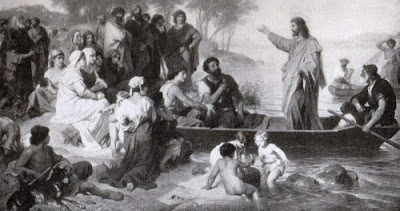 Today's Gospel passage, which is separated from last week's reading by Herod's view of Jesus and the passage telling of the beheading of the Baptist, which occurred at the urging of Herodias after Salomé's mesmerizing dance, has Jesus inviting the Twelve, whom the inspired author at this point deems as "apostles" for the first time, to go with him across the Sea of Galilee to rest. "Apostles," of course, means the ones who are sent.

As Jesus and the disciples are making their way to other side of the inland sea by boat, a multitude heads to the same destination on foot. As a result, upon their arrival, Jesus and the Twelve find the crowd there waiting: "When [Jesus] disembarked and saw the vast crowd, his heart was moved with pity for them, for they were like sheep without a shepherd; and he began to teach them many things" (Mark 6:34).

The phrase "his heart was moved" is a translation of the Greek word σπλαγχνίζομαι, which transliterates as splagchnizomai. This word literally means "to be moved in one's bowels," which is perhaps best translated "he was deeply moved." So, instead of resting with his apostles, which was his motivation for crossing the Sea of Galilee, he taught the lost people. Like Jeremiah before him, despite sometimes being feeling the effects of his mortality, Jesus was never too weary to serve his Father by serving his sisters and brothers. Jesus is never too tired for you nor does he grow tired of you, which is more than can be said of any other person you've ever met, including your spouse, your parents, or your friends, no matter how strongly they might insist otherwise.

This past week, I ran across an article in Church Life Journal by Paul Griffiths entitled "Ora et Labora: Christians Don’t Need Leisure." In his piece, Griffths notes how our self-centered culture encourages us to think of leisure as doing nothing. He uses the Latin for doing nothing otium. He notes that otium, which he describes as "the state or condition of doing nothing, of being otiose, of occupying a place in which nothing is expected and there is nothing to do," as hell. We take respite from our labor by worshiping God. This side of the end of the world, we are to work and to pray. I think today's Gospel reading supports Griffths's thesis quite well. While it may sound Stoic, this manner of loving is joyful because it brings us joy. It is the path to joy, to fulfillment, especially when compared with the hedonistic pleasure-seeking that is really what our society's obsession with "leisure" truly is.

By insisting that it's important that we do not become what one of my former bosses described as "chronic recreators," I am not saying that we don't need to rest. We need to rest and take breaks. This is accomplished daily by our going to bed, which is a bit like dying, before arising to for a new day of ora et labora in the service of God and neighbor.

John R. Quinn, the Archbishop emeritus of San Francisco, died last summer. Due to the good graces of his one-time priest-secretary, now-Archbishop John Wester, I had the opportunity to meet Archbishop Quinn on a few occasions and to speak with him a little. Like most bishops I have known, such as John Wester himself, who was formerly my bishop, and my current bishop, Oscar Solis, Archbishop Quinn was a good shepherd. This means that he engaged in his ministry whole-heartedly, serving God's people with great fervor and zeal. In his homily at Archbishop Quinn's funeral Mass, Archbishop Wester shared a story about when he served as Quinn's secretary. One of the duties of a bishop's priest-secretary is to travel with the bishop. This means serving as chauffeur. Wester told of driving Quinn home on a Sunday evening after a particularly grueling day when Quinn told him "he was 'experiencing a certain lassitude.'" The young priest replied: "You just can't bring yourself to say you're tired." To which the archbishop replied, "Certainly not!"

My friends in Christ, may we never give into weariness as we make our way through hac valle lacrimarum in worshiping the Lord and serving others out of love as we eagerly await that day when we "will run and not grow weary" and will "walk and not grow faint" (Isa 40:31). '
at July 21, 2018