Our readings for this Sunday have a single theme: forgiveness. The takeaway from these readings can be accurately summarized in the following manner: we need to be forgiven, we need to forgive, and being forgiven depends on forgiving. Of course, we are reminded of this every time we gather to celebrate the Eucharist when we pray the Lord’s Prayer and say: “forgive us our trespasses, as we forgive those who trespass against us.”

Our first reading from the Book of Sirach makes it clear: “Forgive your neighbor’s injustice; then when you pray, your own sins will be forgiven” (Sir 28:2). You show your gratitude for God’s forgiveness by forgiving others. It is by forgiving others that you participate in Christ’s mission of setting the world to rights. One of the most powerful ways we can transform the world is by forgiving, being peacemakers instead of vengeance seekers. Forgiveness, which is an act of love for both God and neighbor, is what breaks the cycle of sin and violence. Forgiveness is the antidote to the poison of the lex talonis, which bids us seek an eye for an eye and tooth for a tooth.

In preaching on Christ’s commandment to forgive, I am aware that perhaps there is someone listening who has suffered egregiously at the hands of someone else. For people who have suffered horrific wrongs at the hands of others, forgiving is not only a challenge but a huge provocation. Forgiving someone who has gravely harmed and/or deeply wounded you can seem like betraying yourself. When this is the case, forgiveness often becomes both a choice and a process. It becomes a process because it is a choice that you have make over and over until, by the grace of God, you can forgive the one at whose hands you have suffered.

Corrie Ten Boom was a Dutch Christian, who, along with her father and sister, was arrested by the Nazis in Holland for rescuing Dutch Jews during the Nazi occupation of her country. Corrie and her sister Betsie were sent to the Ravensbrück concentration camp. Like so many people, Betsie died a horrible death in the camp. Corrie witnessed the slow, painful death of her sister. After the war, Corrie set up rehabilitation centers in Holland for those returning from the camps. She also traveled around Europe sharing her experiences and speaking about the boundlessness of God’s forgiveness.

One night, after a presentation she gave in Munich in 1947, just a few years after the war, she noticed a man making his way through the crowd towards her. It took her only a few seconds to recognize him as one of the SS guards from Ravensbrück. Upon recognizing him, she had a flashback to the horrors she and Betsie had experienced in the camp. Upon reaching her, the man extended his hand and said: “A fine message, Fraulein! How good it is to know that, as you say, all our sins are at the bottom of the sea.” She realized that he did not recognize her. He went on to note that she mentioned Ravensbrück in her talk and admitted to being a guard there. He then added, “But since that time…I have become a Christian. I know God has forgiven me for the cruel things I did there, but I would like to hear it from your lips too.” He extended his hand again and asked, “will you forgive me?” 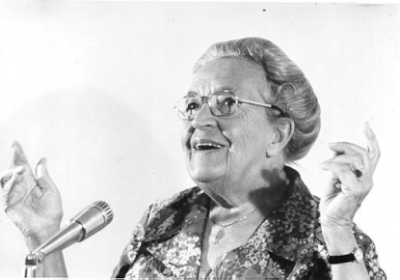 Corrie paused, wrestling with what she described as “the most difficult thing I had ever had to do.” In that suspended moment, she realized she had to forgive this man. Why? “The message that God forgives,” she noted when sharing this encounter sometime later, “has a prior condition: that we forgive those who have injured us” (Zahnd, UNconditional 31-34). She then cited the words of Jesus from the sixth chapter of St Matthew’s Gospel, which comes immediately after the Lord’s Prayer: “If you forgive others their transgressions, your heavenly Father will forgive you. But if you do not forgive others, neither will your Father forgive your transgressions” (Matt 6:14-15). Without a doubt, there is nothing our Lord asks of us that is more difficult than to forgive those who wrong us. But if we can't find healing in forgiving those who have injured us, as the Lord plainly teaches, the Gospel just might be a fraud.

What about justice? As St Paul wrote in his Letter to the Romans: “’Vengeance is mine, I will repay, says the Lord.’ Rather, ‘if your enemy is hungry, feed him; if he is thirsty, give him something to drink; for by so doing you will heap burning coals upon his head’” (Rom 12:19-20). In his encyclical, Spe Salvi, Pope Benedict XVI insisted that God’s mercy “does not make wrong into right. It is not a sponge which wipes everything away, so that whatever someone has done on earth ends up being of equal value” (par 44). My friends, Christ will see to justice because Jesus is Lord of the living and the dead.

Despite our Lord’s provocative teaching on the necessity of forgiving others, I often hear Christians invoke karma. Rather than forgive, we sometimes want the person who wronged us to suffer like they’ve made us suffer. But, as the inspired author of Sirach noted: “The vengeful will suffer the LORD's vengeance, for he remembers their sins in detail” (Sir 28:1).

In today’s Gospel, the Lord ups the ante. Peter asks how many times he is to forgive someone who sins against him. He asked if forgiving someone seven times is sufficient. Jesus replied that he must forgive “seventy-seven times.” This does not mean forgiving 77 times and the 78th time you can hold a grudge and exact revenge. In addition to seven It means forgiving without limit. Why seven and seventy-seven? This hearkens back to Genesis, when Lamech, the father of Noah, boasted of killing two men. He then referred to Cain, murderer of his brother, Abel, and lamented: “If Cain is avenged seven times, then Lamech seventy-seven times” (Gen 4:23-24). In this parable, Jesus demonstrated that God’s mercy is much greater than our sins.

The Parable of the Unmerciful Servant makes clear how utterly necessary it is for you to forgive others if you expect God to forgive you. Referring to the servant who was forgiven a great a debt, but who refused to forgive a small one, Jesus states he was handed “over to the torturers until he should pay back the whole debt,” before warning his disciples, “So will my heavenly Father do to you, unless each of you forgives your brother from your heart” The parable is an allegory. The master is God. As sinners, we are the servant forgiven a large debt. In order to avoid becoming the servant who must repay the large debt, you must be willing to forgive others. What the Lord tells us is clear: if you would receive Divine Mercy, you must imitate it. Since there is no question about our on-going need for God’s forgiveness, the question we need to ask ourselves today is, “Who do I need to forgive?”
at September 17, 2017