St. Thérèse on love and unbelief

Tomorrow is the liturgical memorial of St. Thérèse of Lisieux, the Little Flower. Since tomorrow is a Sunday, her feast day will not be formally observed. This is just fine. Our weekly celebration of the Lord's resurrection ought to take precedence over saints' feasts. After all, were it not for Christ's resurrection, there would be no saints. By honoring the Little Flower today, I do not want to short-change St. Jerome, whose liturgical memorial is today.

Jerome is perhaps best known for translating the books that together constitute what we now call the Bible from their original languages into Latin. While certainly given to ascesis and the pursuit of holiness, Jerome was also known for his temper and irascibility. Perhaps anticipating the future world of social media, he once averred: "It is idle to play the lyre for an ass."

We don't use this term much anymore, but historically saints have a cultus, a cult. In this context, "cult" refers to a substantial group of people who venerate a person they consider to be holy. Other than being a martyr, how someone traditionally became a saint was by being venerated by people from their local church after their death. These days, at least in the Catholic Church, sainthood is pursued via a bureaucratic and juridical process that smacks of what the German sociologist Max Weber called "the routinization of charisma." A great example is Oscar Romero, who has only achieved the canonical status of "blessed," the step just before being raised to the altar as a saint. Despite this, there is no doubt in the minds of millions of Salvadorans and other people worldwide, myself included, that he is a saint. Another example of this is Venerable Matt Talbot, who has worked many miracles of recovery among people who suffer from alcohol and drug addiction. Along with Romero and Matt Talbot, there are other saints of (relatively) modern vintage who can rightly be said to have cults. St. Thérèse is certainly one of them. Another modern saint with a cult is Padre Pio, St. Pio of Pietrelcina. Of course, Mother Teresa, St. Teresa Kolkata, also has a cult.

To give you some idea of the widespread devotion to the Little Flower and that her intercession works in just the way she hoped it would at the time of her passing, I will be self-referential enough to point you an article I wrote seven years ago for the English language version of Il Sussidiario: "St. Thérèse of Lisieux, Little Flower and Édith Piaf, Little Sparrow." In his autobiography, The Seven Story Mountain, Thomas Merton described his encounter with the little one from Lisieux (in for a penny, in for a pound- my initial contribution on the collaborative blog The Boy Monk this week was "Thomas Merton and Me"). 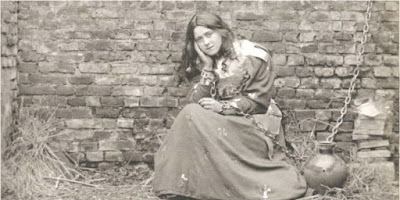 Drawing heavily on Thomas Nevin's book The Last Years of Saint Thérèse: Doubt and Darkness, 1895-1897, which is a must-read for anyone devoted to the Little Flower, Tomáš Halík, in his own book, Patience with God: The Story of Zacchaeus Continuing In Us, noted that Mother Agnes (Thérèse's sister, Pauline), who held the final conversations with Thérèse just before her death and who edited (really censored) the Little Flower's works and words, (mis)construed Thérèse's mental state (in much the same way St Teresa of Kolkata's was misdiagnosed by one of her spiritual directors). The misconstrual was the result of trying to stuff her saintly sister's experience into the pre-existing categories of Carmelite spirituality. We may owe a debt of gratitude to Mother Agnes. Without her censorship of her sister's spoken words and editing of some of what she wrote, there's a fairly good chance Thérèse would not have canonized, at least when she was. As a result of her efforts, Halík contends, Pauline Martin "failed to grasp what was truly original, new, and unique about Thérèse of Lisieux. something that, understandably, is absent in the case of both the 'great Theresa' of Avila and John of the Cross" (28). Pointing to Thérèse's principle: "to accept even the strangest thoughts" for the love of God.

For Thérèse, the strangest of these thoughts was that there were not only atheists but conscientious ones. Previously she considered atheists to be thinking, speaking, and acting in bad faith, people who "contradicted their own convictions." This should sound familiar because it is the starting point of many Christians today, especially those who fancy themselves as something called an "apologist." Jesus himself revealed to her that there really were people who lived conscientiously without faith. He showed her atheism was not just an illusion, or, worse yet, always a "sinful self-delusion," which then caused the "atheist" to deceive others. What confirmed this for her was her own experience of unbelief, of atheism, as she lay dying. As a result of this, she came to see "unbelievers as her brothers," as her companions, that is, those with whom she "sits at the same table and eats the same bread" (29). It is here where Halík is worth quoting at length:


Unlike them, she is aware of the bitterness of this bread, because, unlike them, she has known the joy of God's closeness (even though the memory of it now only deepens her pain), whereas people indifferent to God are generally quite unaware of the burden and tragedy of their situation. In fact, it is only thanks to her previous experience of faith that she is able to experience in depth the real drama of abandonment by God, as well as discover and experience the hidden face of atheism, which many accept with such casual matter-of-factness (29)

St. Thérèse, pray for us in our unbelief- that we may break bread with you and so many unexpected others at the table of the kingdom.
at September 30, 2017

Email ThisBlogThis!Share to TwitterShare to FacebookShare to Pinterest
Labels: Community of the Heart, discipleship, Reflections and Ruminations, Saints