When maintaining a blog you never lack for material. Events of the past two weeks have been mind-boggling. It would be utterly impossible to keep up with hurricanes, earthquakes, threats of war, a badly divided country that seems to grow more fractious each day with no healing in sight. Rather than blog, I've been posting longer than usual status updates on Facebook. In truth, I'd rather blog. Why? Because I can thoughtfully write out what I have to say and put it out there, so to speak. People can take it for what it it's worth. I can consider thoughtful responses rather than reactionary diatribes.

As I attempt to wade back into posting regularly here, it's important to mention that I am involved in another on-line endeavor. It is a collaborative blog initiated by Mike O'Brien, who is an attorney in Salt Lake City. It is called The Boy Monk, which is a reference to Mike's upbringing. In addition to Mike and I, the other regular contributors are Ms. Jean Welch Hill, also an attorney, who serves the Diocese of Salt Lake City (my local church) as Government Liaison and Director of the Diocesan Peace and Justice Commission, Dr. Gary Topping, a great historian and long-time friend and dedicated reader of this blog for pretty much its entire existence, Jim Larson, a scientist and science teacher, and Nick Blaylock, a dancer, artist and teacher. All of us are here in Utah, which is one of the things I think makes this effort quite special, if I may use a word that is typically employed ironically or sarcastically.

Mike launched the blog on the second anniversary of Pope Francis's speech to a Joint Session of the United States Congress, an historical first. In his kick-off post, "The Pope’s 2015 Speech to Congress: Essential Aspects of American Catholicism," Mike gave some background and insight as to why this speech is, or should be, of significance to Catholics in the United States. 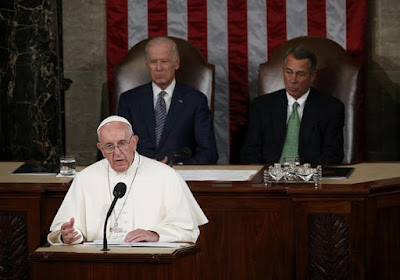 In his speech to Congress, the Holy Father highlighted four citizens of the U.S. who helped shape the "fundamental values which will endure forever in the spirit of the American people." People who, to cite the Pontiff again, "offer us a way of seeing and interpreting reality" and whose memories we should honor in order to be inspired, especially in the midst of conflicts like the ones we are currently experiencing. Of the four people Francis spoke about two were Catholics. Interestingly, both Catholics converted as young adults: Dorothy Day and Thomas Merton. The other two, Abraham Lincoln and Dr. Martin Luther King, Jr., were Protestants.

Dr. Topping's post today is on Abraham Lincoln's stance on slavery vis-à-vis the U.S. Civil War: "A Catholic Looks at Abraham Lincoln." It is a provocative piece. My initial contribution will be on Thomas Merton, whose life and writings have been very formative for me and many other Catholics in the United States and beyond. It will be interesting to read the other contributions.

Thinking about Dr. King and the civil rights movement, it bears noting that yesterday, in addition to being the second anniversary of Pope Francis's speech to Congress, it was the sixtieth anniversary of the day Little Rock Central High School was racially integrated. On that day federal troops from the 101st Airborne Division escorted 9 black teenagers to school. Those nine teens are known to history as "the Little Rock 9." Yesterday was also my oldest daughter's twenty-first birthday.

Well, I think that does it for now, except to call attention to this article on Ammon Hennacy that appeared in The Salt Lake Tribune on 23 September: "Fifty years ago, a Catholic anarchist tried to help solve homelessness in Salt Lake City. Here’s what happened." Let's just say it's another article in which the Catholic Church, my local church, does not come out too well, something on which the author does not dwell. To complement Harmon's piece I also offer Dorothy Day's 1970 column in The Catholic Worker in remembrance of Hennacy, written a month or so after his death: "Ammon Hennacy: ‘Non-Church’ Christian."
at September 26, 2017