Every year I used to write up a fairly lengthy piece on Labor Day. At least in my view, Labor Day remains an an important holiday. Like all such observances these days, the significance of Labor Day grows more obscure all the time. To truly understand the importance of Labor Day one needs to grasp that there is no irony whatsoever in it being a day off for laborers.

The way I see it, this country needs a revitalized labor movement. On the whole, such a revitalization will require workers to either establish new unions or seize back control of existing ones.

Last week, while traveling, I watched Django Unchained, which, like Inglorious Bastards, is a Quentin Tarantino revenge fantasy flick. I must admit that I find this genre distasteful because, far from appealing to the better angels of our human nature, it tends to summon up our demons. But, as it so happens, I found Django Unchained, like most Tarantino films, to be well-made, entertaining, and even somewhat compelling, if sickeningly violent. Jaime Foxx and Leonardo DiCaprio turned in outstanding performances in the film, as did Samuel L. Jackson, but then one expects that from such a great actor. As a director, Tarantino seems to get the best out of actors. 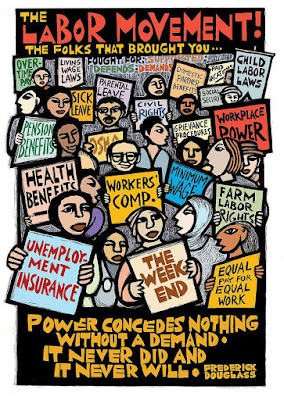 In ruminating on Labor Day last night, I couldn't help but think of the dining room scene where the cruel slave owner, Calvin Candie, played by DiCaprio, calls Dr. Schultz's bluff to purchase Broomhilda, one of his slaves who is Django's wife. Django, who is black, is Dr Schultz's partner. As part of his dramatic power play, Candie has the skull of a deceased slave, "Old Ben," brought to him. Telling the story of Old Ben's life, Candie remarked:

I spent my whole life here right here in Candyland [the name of his plantation], surrounded by black faces. And seeing them every day, day in day out, I only had one question. Why don't they kill us? Now right out there on that porch three times a week for fifty years, old Ben here would shave my daddy with a straight razor. Now if I was old Ben, I would have cut my daddy's goddamn throat, and it wouldn't have taken me no fifty years to do it neither

Let me be clear, I DO NOT favor violent revolution and I am not advocating it. It is a very good thing that major advancements in civil rights for black citizens of the United States were brought about in a non-violent manner. While I am neither a historian nor a sociologist, far from Calvin Candie's racist assertions, based on the pseudo-science of phrenology, that black people are inherently subservient, I think a significant part of their willingness to suffer a lot over a long period of time, which they rightly viewed as analogous to the Israelites' Egyptian bondage, is attributable in no small part their being much better Christians than their self-styled and often brutal masters. I hold to my assertion even as I recognize that those who were enslaved were forcibly and involuntarily "Christianized" by slave-holders. The Lord ushers in the reign of God in the most unexpected ways, n'est ce pas? Of course, other factors came into play as well.

Even in this age of rapidly increasing automation, human labor remains vital to our economy. We are long way from that not being the case. My point? Laborers, whether white, grey, or blue collar, constitute the majority of citizens of the United States of America. Therefore, by preponderance of numbers much needed change can be effected by collectively employing legitimate and non-violent means. Let's not forget that prior to the heroic efforts of the champions of civil rights for black Americans, foremost among whom was Dr Martin Luther King, Jr, leaders of the Labor Movement in the 1920s and 1930s brought about change in a similar way, which meant suffering violence, even lethal violence, at the hands of those in the service of interests vested in what was then the status quo. What were the results? Child labor laws, 40 hour work week, weekends, paid holidays, sick leave, etc.
at September 05, 2017

Email ThisBlogThis!Share to TwitterShare to FacebookShare to Pinterest
Labels: Politics, Reflections and Ruminations