Seeking to make sense of All Souls Day

In an excerpt of a book he wrote upon the death of his brother, which excerpt was the second reading for today's Office of Readings for the Liturgy of the Hours, St. Ambrose insisted, "Without the assistance of grace, immortality is more of a burden than a blessing." Anyone who has read even one of the books that comprise Anne Rice's Vampire Chronicles has some idea of what the great bishop of Milan meant. Even today when we discuss death "as a part of life," which contradiction is almost never challenged, I think most people don't believe or don't want to believe that death marks their end as self-conscious beings.

Catholics, of course, believe in eternal life. Traditionally we discuss "four last things"- death, judgment, heaven, and hell. All will die, all will be judged, and everyone will wind up in one place or the other. What happens to us between death and resurrection should we not live to the time Jesus returns? Those destined for perdition are judged and sent there, while some destined for beatitude enter into God's presence and immediately behold what we call "the beatific" vision," these are the saints. Yesterday's observance of All Saints was a celebration of those nameless people who behold the beatific vision along with those canonized, beatified, and made venerable, whose intercession we rely upon. I think there are many, many more nameless saints than named saints. I, for one, think Pope St. John Paul II had it right when he canonized so many saints during his lengthy pontificate. What did he "get right"? He understood that holiness is neither as rare nor as unattainable as we are often think. This is not to say that becoming holy, which means nothing other than loving perfectly, is easy. It is not. Then there are those who are destined for beatitude but who are not ready yet. These are those who, according to Church teaching, go to Purgatory, where their purgation continues until they are ready to enter God's presence.

The communio sanctorum consists of those who dwell in God's presence, those in Purgatory, and the Church on earth. In the end, the Church will only be made up of saints. What Catholic French writer Leon Bloy asserted is for money one of the truest thing ever written: "There is only one tragedy in the end, not to have been a saint." It was Bloy who also wrote: "Suffering passes, but the fact of having suffered never passes." I believe those in purgatory undergo the suffering they chose forego during their mortal lives. As Pope St. JPII noted with some regularity suffering and salvation are mysteriously linked.

Throughout the entire month of November Roman Catholics are asked to pray and make sacrifices on behalf those who have died. We do so in order to gain indulgences for them, thus assisting them to reach beatitude. There are acts that with the proper intent, disposition, and preparation can be indulgences. This year November marks the final month of the Jubilee of Mercy, providing those of us who have not yet received the Jubilee indulgence an opportunity to do so. 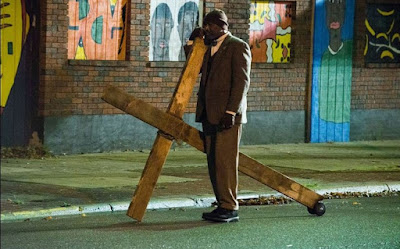 Delroy Lindo in “Do You Believe?” (Courtesy of Pure Flix)via Sister Rose

31 October 2016 marked the 499th anniversary of the Protestant Reformation. The event taken as the beginning of the Reformation is when the Augustinian monk, Fr. Martin Luther, nailed his 95 theses to the door of the Church of the Holy Spirit in Wittenberg, Germany. It was not his intent at that time to split the Church, or leave it himself, but to reform it. The immediate cause of his bold act was the selling of indulgences, particularly by the Dominican John Tetzel, whose unholy commerce took place in Luther's vicinity. It's important to note that not only did Luther not desire either to leave or split the Church, at least in the beginning, he did reject indulgences outright.

In my view, indulgences were not truly reformed until Pope Paul VI's Indulgentarium doctrina, promulgated after the Second Vatican Council, in 1967.

I've written practical pieces before on these kinds of practices, but for this All Soul's day I refer to an article written by Cari Donaldson for Catholic Exchange: "Praying for All Souls In Love."
at November 02, 2016