"All right, then, have it your way"

Yesterday marked the 118th anniversary of the birth of Clive Staples Lewis. November twenty-second marked the 53rd anniversary of his passing into eternity. He died on the same day President John F. Kennedy was assassinated, which was also the day that prescient author Aldous Huxley died. To honor the life of C.S. Lewis, it seems fitting, as we are in the early days of the season of Advent, a time when we think about, prepare for, and look forward to Christ's glorious return, to cite this from his book The Great Divorce:

There are only two kinds of people: those who say to God, "Thy will be done," and those to whom God says, "All right, then, have it your way"

What does this mean, or, perhaps more acutely, what might Lewis' assertion look like if it is true? I think Edna St Vincent Millay painted a very poignant picture of what Lewis asserted in her poem "The Suicide." Her poem begins with the narrator saying,

Curse thee, Life, I will live with thee no more!
Thou hast mocked me, starved me, beat my body sore!
And all for a pledge that was not pledged by me,
I have kissed thy crust and eaten sparingly
That I might eat again, and met thy sneers

In what way has life mocked, starved, and beaten this distressed person?

Ah, Life, I would have been a pleasant thing
To have about the house when I was grown
If thou hadst left my little joys alone!
I asked of thee no favor save this one:
That thou wouldst leave me playing in the sun!
And this thou didst deny, calling my name
Insistently, until I rose and came.
I saw the sun no more.—It were not well
So long on these unpleasant thoughts to dwell,
Need I arise to-morrow and renew
Again my hated tasks, but I am through
With all things save my thoughts and this one night,
So that in truth I seem already quite
Free,and remote from thee,—I feel no haste
And no reluctance to depart;

In light of the rest of the poem, it seems to me the key phrases here are "playing in the sun" and "hated tasks."

After the seventh stanza there is a break in the poem marking the act of suicide- the passage from life to death. When "the suicide" reaches the other side, she finds herself in her "father's house." When she arrives at the house there is a feast in progress. Looking in on the feast, she notices how shabbily dressed she is compared to those who are feasting at table. Recalling that this her father's house, she summons the courage to knock on the door;

Tattered and dark I entered, like a cloud,
Seeing no face but his; to him I crept,
And "Father!" I cried, and clasped his knees, and wept

There is another break, like the one marking the act of suicide. I find it intriguing that no mention is made of her being invited to join in the feast. After this break she describes her life in the father's house:

Ah, days of joy that followed! All alone
I wandered through the house. My own, my own,
My own to touch, my own to taste and smell,
All I had lacked so long and loved so well!
None shook me out of sleep, nor hushed my song,
Nor called me in from the sunlight all day long 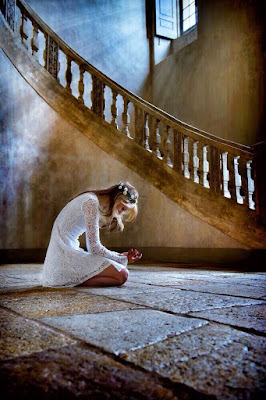 But after awhile she begins to wonder what else is happening, what her father's business is and how she might participate in it:

"Father," I said, "Father, I cannot play
The harp that thou didst give me, and all day
I sit in idleness, while to and fro
About me thy serene, grave servants go;
And I am weary of my lonely ease.
Better a perilous journey overseas
Away from thee, than this, the life I lead,
To sit all day in the sunshine like a weed
That grows to naught,—I love thee more than they
Who serve thee most; yet serve thee in no way.
Father, I beg of thee a little task
To dignify my days,—‘tis all I ask
Forever, but forever, this denied,
I perish"

To which the father soberingly responds:

..."All things thy fancy hath desired of me
Thou hast received. I have prepared for thee...
No pleasure shalt thou lack that thou shalt name. But as for tasks—" he smiled, and shook his head; "Thou hadst thy task, and laidst it by," he said."

In his homily at daily Mass just a few days ago (Friday, 25 November to be exact, the penultimate day of the liturgical year) Pope Francis said:

Eternal damnation is not a torture chamber. That’s a description of this second death: it is a death. And those who will not be received in the Kingdom of God, it's because they have not drawn close to the Lord. These are the people who journeyed along their own path, distancing themselves from the Lord and passing in front of the Lord but then choosing to walk away from Him. Eternal damnation is continually distancing oneself from God. It is the worst pain, an unsatisfied heart, a heart that was created to find God but which, out of arrogance and self-confidence, distances itself from God

Pray for the dead, especially those who for reasons known only to them and certainly to God (in some instances, no doubt, only to God), took their own lives. We know that serious mental illness is the cause of many suicides, which certainly inhibits freedom and in some instances, no doubt, prohibits making a free choice. Inhibited and prohibited freedom diminshes or entirely eliminates culpability altogether. Have hope. God, as Popes Benedict XVI and Francis, C.S. Lewis, and Edna St Vincent Millay all tell us, is a kind and merciful Father.

Of far more relevance than theologizing or psychologizing about suicide, especially during Advent, in the midst of what I find to be incomprehensible "holiday" chaos, is to take the opportunity to honestly ask yourself, "Am I seeking to draw closer to the Lord, or am I arrogantly walking my own path and, by so doing, acting presumptuously?" Hell is not, as Sartre famously averred, other people. Hell, to use a phrase of St Augustine's of which Luther was quite fond, is Homo curvatus in se that is, "man curved in on himself."
at November 30, 2016

Email ThisBlogThis!Share to TwitterShare to FacebookShare to Pinterest
Labels: Community of the Heart, Cultural, Poetry, Reflections and Ruminations, Theology