In a post almost a year ago I drew attention to an internet radio station here in Utah, KCQN: The Next Wave of New Wave. The station was named after the old KCGL, Utah's first New Wave station, and it's follow-on KJQN, known simply as KJQ. The effort was geared towards getting the station on the air. Well, they've succeeded. 103.1 FM is now on-the-air. If you're northern Utah, I urge you to tune in. If not, listen on-line. 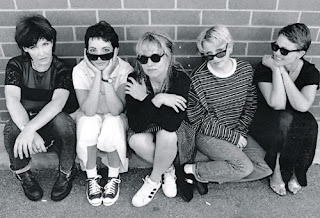 As I was out and about yesterday listening to The Next Wave of New Wave, I heard a version of The Go-Go's "Our Lips Are Sealed" by Fun Boy Three, a British New Wave band from the early '80s. Like my post from last fall, which featured "Mirrors" by Broken Silence, I won't sully this with a lot of commentary.