St Stephen is my patron saint. Stephen is my Dad's name and my middle name. As my patron saint and as one of the seven men universally acknowledged as the Church's first deacons, he is also the patron saint of my blog, "Catholic deacon." The Feast of Stephen is traditionally a day on which the service of deacons is acknowledged. Like his six fellow deacons, Stephen was a Greek-speaking Jew. Each year I share a reflection on the occasion of his glorious feast, usually quite lengthy. But this year I am sticking closely to his story as conveyed by Sacred Scripture. 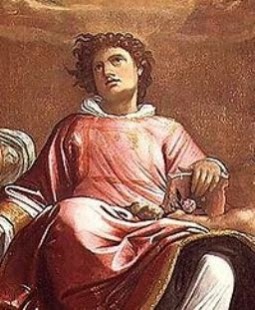 Stephen's martyrdom, or "proto-martyrdom," was a dramatic event that came as the result of his long discourse to Sandhedrin on salvation history reaching its culmination Jesus Christ. His discourse culminated with these words: "You stiff-necked people, uncircumcised in heart and ears, you always oppose the holy Spirit; you are just like your ancestors. Which of the prophets did your ancestors not persecute? They put to death those who foretold the coming of the righteous one, whose betrayers and murderers you have now become. You received the law as transmitted by angels, but you did not observe it" (Acts 7:51-53). These words were the immediate cause of this Spirit-filled deacon being put to death:


When they heard this, they were infuriated, and they ground their teeth at him. But he, filled with the holy Spirit, looked up intently to heaven and saw the glory of God and Jesus standing at the right hand of God, and he said, “Behold, I see the heavens opened and the Son of Man standing at the right hand of God.” But they cried out in a loud voice, covered their ears, and rushed upon him together. They threw him out of the city, and began to stone him. The witnesses laid down their cloaks at the feet of a young man named Saul. As they were stoning Stephen, he called out, “Lord Jesus, receive my spirit.” Then he fell to his knees and cried out in a loud voice, “Lord, do not hold this sin against them”; and when he said this, he fell asleep (Acts 7:54-60)

St Stephen, glorious witness of the transforming power of Jesus Christ by the power of the Holy Spirit, pray for us!
at December 26, 2014